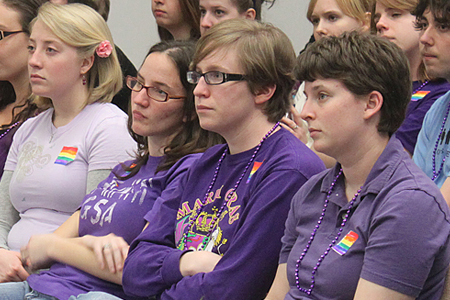 A silent protest greeted Dr. Matthew Franck, who opposes same-sex marriage, when he lectured Monday at Atlanta's Oglethorpe University. LGBT advocates who organized the protest said they wanted to make sure people understand the university is an open and welcoming place.

Franck, director of the William E. & Carol G. Simon Center on Religion & the Constitution at the Witherspoon Institute in Princeton, N.J., spoke at Oglethorpe in a discussion titled, “Charging ‘Hate’ in the Same-Sex Marriage Debate: How to Stop an Argument You're Losing and Endanger Freedom While You're At It.”

He has argued that it is inaccurate to call opposition to gay marriage or other LGBT issues "hate," claiming that gay advocates use the term to close down debate.

LGBT students at Atlanta's Oglethorpe University plan to protest Monday during a lecture by Matthew J. Franck, a leader of a conservative group that opposes gay marriage.

“I was just getting so infuriated that he was coming to our school,” Oglethorpe junior Brittany Weiner told Project Q Atlanta. “Nothing is more personal to me than saying I can’t marry the person I love. Oglethorpe is such an accepting community that I couldn’t believe it."

Weiner is planning the protest with her partner, Jess Graner, and OUTlet, the campus LGBT group. Details are posted on a Facebook page with the slogan "Marriage is a Human Right, Not a Heterosexual Privilege."