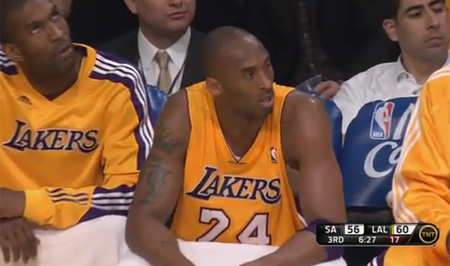 Despite the fact he's widely regarded as one of the best players currently playing in the National Basketball Association, Los Angeles Lakers Forward Kobe Bryant has hardly been a role model for personal behavior.

Last night during a game against the San Antonio Spurs, Bryant received a technical foul during the third quarter and was not too pleased with the call. He took his frustrations out on his chair and a moment later the game's referee, shouting what appears to be “fucking faggot” at the official after finding his place on the bench.

Granted, you can't really hear what Bryant shouts in the video, but even an amateur lip reader can easily make out what he appears to say.