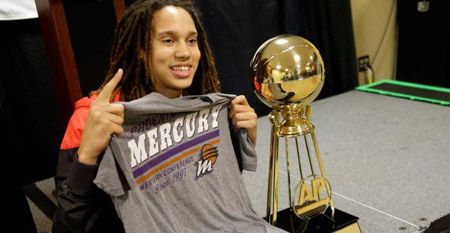 Brittney Griner made waves as a women's collegiate basketball star but this week, the three-time All-American center from Baylor is making waves for a completely different reason: coming out of the closet on the heels of her selection as the number one overall pick in the WNBA draft by the Phoenix Mercury.

Speaking Wednesday in an interview with Sports Illustrated's Maggie Gray, Griner commented on gay and lesbian athletes in professional sports and encouraged others to “be true to yourself.”

"Being one that's out, it's just being who you are,” Griner said. “Again, like I said, just be who you are. Don't worry about what other people are going to say, because they're always going to say something, but, if you're just true to yourself, let that shine through. Don't hide who you really are."