Although the Atlanta Police Department's Red Dog Unit has been disbanded for several months now, the illegal actions of the unit involved in the controversial Atlanta Eagle raid and some of its officers are continuing — possibly — to cost taxpayers money.

On Tuesday, the Atlanta City Council's Public Safety Committee voted to pay $200,000 to two men who alleged they were strip searched on the side of the road in broad daylight by three former Red Dog officers. The full council will vote on the settlement on Aug. 15.

In January, the two men — Brian Kidd and Sean Venegas — described how they were stopped in Southwest Atlanta by three Red Dog officers on June 30, 2010, and were groped while a cavity search was also conducted in the middle of the street and in broad daylight.

The officers said they were searching for drugs but no drugs were found.

The Atlanta Police Department sent in top brass to discuss the new APEX Unit that replaces the controversial Red Dog Unit as well as ways the department hopes to erase its bad reputation among gay, lesbian, bisexual and transgender residents.

More than a dozen APD officers, including the LGBT liaisons and members of the new Community Orienting Policing Services unit, packed into Outwrite Bookstore & Coffeehouse on Wednesday for a meet and greet that included a Q&A. The meeting was organized by Philip Rafshoon, owner of Outwrite and who is a member of the APD's LGBT Advisory Group. Several members of the advisory group were also in attendance.

Officers stressed they wanted to rebuild trust with the LGBT community that has eroded significantly since the unconstitutional raid on the Atlanta Eagle in 2009. The city settled a federal lawsuit in December  for more than $1 million with patrons of the bar the night it was raided. Also as part of the settlement, the APD must conduct an in-depth investigation into the raid to be completed by June.

The Atlanta Police Department will disband its controversial Red Dog Unit in 60 days, Chief George Turner announced at a press conference this morning.

The paramilitary-style unit had come under scrutiny for its supporting role in the 2009 police raid on the Atlanta Eagle, a gay bar on Ponce de Leon Avenue, and recent complaints from two men that Red Dog officers — including two who also took part in the Eagle raid — subjected them to a strip search on a public street in broad daylight.

The Red Dog unit will be replaced by a new elite unit that has yet to be named, Turner said. The new unit will focus chiefly on violent crime, whereas the primary focus of Red Dog was street-level drug activity. Current Red Dog officers will have to apply to be part of the new unit, and will have to meet stringent standards including physical fitness and being free from any sustained complaints against them, Turner said.

Mayor speaks out more about changes to Atlanta Police Department

Mayor Kasim Reed says there needs to be a change in the culture of the Atlanta Police Department after continuing complaints have been made against the controversial Red Dog Unit.

In an interview with WABE's Jim Burress, Reed said the future of the APD "may or may not include Red Dog."

Two men have alleged that three Red Dog Unit officers pulled them over and forced them to pull down their pants. The men also said they were fondled by the officers. Read the official complaints the two men filed here.

The Atlanta Police Department’s LGBT Advisory Group is urging Chief George Turner to accept the Atlanta Citizens Review Board recommendations for punishments of the officers and supervisors involved in the illegal Atlanta Eagle raid.

At its Monday meeting, the advisory board voted to inform the chief as well as the mayor that members “strongly support” the CRB’s recommendations that the officers involved in the raid on Sept. 10, 2009, be punished with three days unpaid leave, a written reprimand and training on the Fourth Amendment. The board also backed the CRB’s recommendations that the supervisors of the raid receive written reprimands and Fourth Amendment training.

Sgt. Kelley Collier, who said during a CRB in-depth investigation that he could virtually not recall anything the night of the raid, was recommended to receive a 30-day suspension without pay for being “untruthful” — an offense that typically ends in an officer being fired.

Three Atlanta police officers are under investigation and will likely face disciplinary action after allegedly conducting a body cavity search on one man and groping another in the street during a traffic stop. Two of the officers are members of the Atlanta Police Department's Red Dog Unit and were part of the September 2009 raid on the Atlanta Eagle, a gay bar on Ponce de Leon Avenue.

The Atlanta Police Department released a statement that an internal investigation, which is now nearing conclusion, showed "inappropriate" behavior by some officers and Chief George Turner plans quick discipline "up to, and including, dismissal."

The two men alleged they were pulled over by three Red Dog Unit officers, forced from their car at gunpoint and then made to pull down their pants.

Our coverage of the end of the federal lawsuit over the Atlanta Eagle gay bar raid, including the mayor’s apology and plaintiffs’ reactions 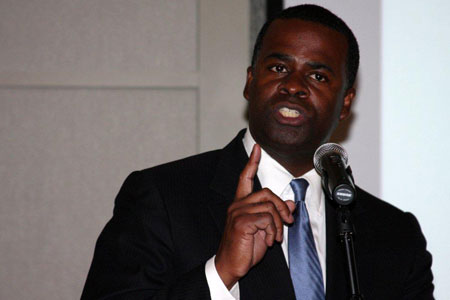 The city of Atlanta has settled with the plaintiffs of the Atlanta Eagle, a gay bar raided by the Atlanta Police Department last year, but details of what exactly the settlement entails are not clear at this time.

Court documents filed late today state: "Settlement Conference held on 12/3/2010. The parties have reached an agreement to settle this case, which they believe is in the best interest of the City, its residents, and visitors. This agreement includes monetary compensation and reforms of the Atlanta Police Department. Until this agreement is approved by the Atlanta City Council and by the District Court, the parties and counsel shall not make further comment to the media about this case."

The next full meeting of the City Council is Dec. 6 at 1 p.m.

Patrons and employees of the Atlanta Eagle filed the federal lawsuit against the city and dozens of Atlanta Police Department officers in November 2009 following the botched raid of the gay bar on the night of Sept. 10, 2009.