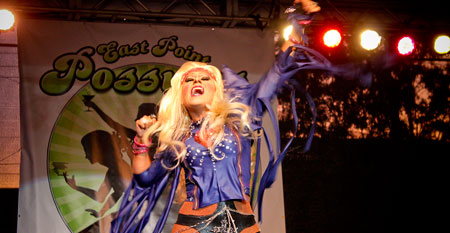 The 1969 Stonewall Riots were rooted in naughtiness: gay men and women partying at the Stonewall Inn during a time when it was forbidden for homosexuals to gather in public, and their rowdy defiance when New York police attempted to break up their party by hauling people off to jail.

So it’s fitting that one of the marquee events of Atlanta’s Stonewall Month – the East Point Possums drag show – also originated with a little mischief.

“When I first went to East Point [city officials] for the permits, I billed it as a Shakespearean variety show,” said Rick Westbrook, aka Sister Rapture Divine Cox, who helps organize the annual drag extravaganza. 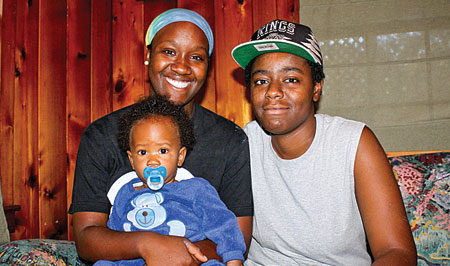 A box of Huggies sits in the corner. A stuffed toy horse leans against a wood-paneled wall next to a toy cat. On the coffee table is a package of Pampers wipes. And Nashad, 7 months old, wearing a blue onesie, sits in the corner of a threadbare futon playing with an elephant small enough to fit into his tiny hands.

His mother, Alexis Crenshaw, 19, sits next to him and grabs his fingers when he reaches for a nearby notebook. Crenshaw’s girlfriend, Nashara Arnold, 21, sits on the arm of the futon, almost protectively, also playing with the child and retrieving a bottle of milk from the refrigerator when he becomes fussy. She and Crenshaw have been together since shortly before Nashad was born and Crenshaw named him after her girlfriend.

The two are in a stable home for the first time in months, living in a cramped but cozy cottage apartment located in the backyard of a Decatur lesbian couple. The lesbian couple, who asked not to be identified, is helping Crenshaw and Arnold through Saint Lost & Found, a group formed in November to help Atlanta LGBT homeless youth find immediate housing.

‘A Home for the Holidays’ 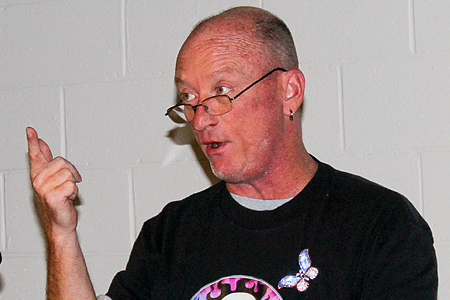 The Atlanta chapter of the Sisters of Perpetual Indulgence has set up a fund and help line to find emergency shelter for LGBT homeless youth in Atlanta who are not able to locate immediate housing through other resources, such as shelters and LGBT youth agencies.

The phone numbers, up and running now and available 24 hours a day, seven days a week, are 678-8-LOST-25, or 678-856-7825. A Facebook page for the Saint Lost and Found fund has also been created and a website, www.saintlostandfound.org is expected to be live later this week.

At a packed town hall forum Wednesday night at the Phillip Rush Center, gay activist Rick Westbrook, also known as Sister Rapture Divine Cox, announced he and other Sisters were forming the Saint Lost and Found fund to accept private donations to help LGBT homeless youth find a place to sleep and eat when other local resources are not immediately available. Westbrook also does community outreach for Positive Impact.