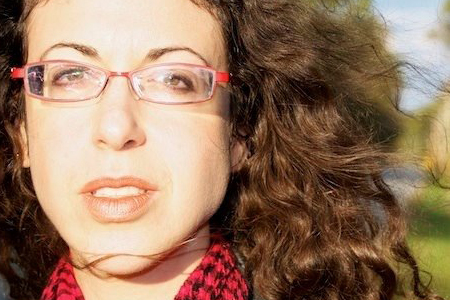 Sarah Terez Rosenblum's lives with a werewolf. But that's not what this article is about. This article is about her debut novel, "Herself When She's Missing" and her reading from that novel on Thursday, July 5, at Charis Books & More beginning at 7:30 p.m.

Some background on Rosenblum: her age is "younger than Jesus was when he died." She was born in Milwaukee, Wisc., and now lives in Chicago. She's cool with being referred to as lesbian or queer.

The bio from her website states: "A writer with an MFA in Creative Writing from the School of the Art Institute of Chicago, Sarah Terez Rosenblum freelances for publications and sites including The Chicago Sun Times and Pop Matters. Her fiction has appeared in literary magazines such as “kill author” and “Underground Voices,” and she was a 2011 recipient of Carve Magazine's Esoteric Fiction Award. Her debut novel, "Herself When She's Missing" was published in June 2012 by Soft Skull Press. When not writing, Sarah supports herself as a figure model, Spinning Instructor and creative writing teacher at Chicago’s StoryStudio. Inevitably one day she will find herself lecturing naked on a spinning bike. She’s kind of looking forward to it, actually."