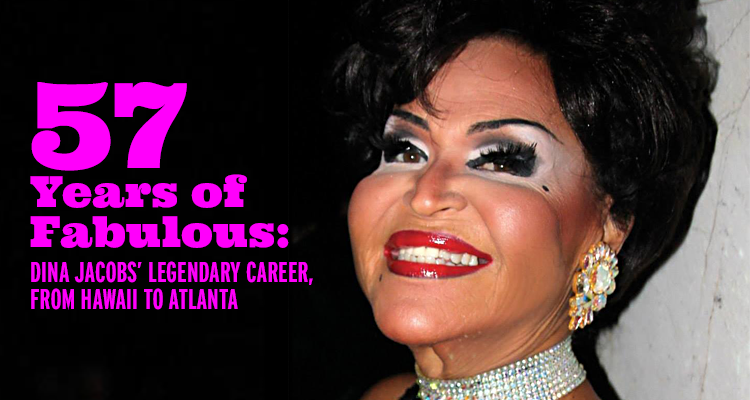 Dina Jacobs has been described as a “drag legend,” and it’s a title that she’s earned. Her drag career has lasted 57 years and earned her many awards, including Miss Gay Chicago, Miss Hotlanta, and the LGBTQ Community Vision Award from the Montrose Center. Dina’s career started in Waikiki, Hawaii, but also moved to Chicago, Nevada, and Atlanta, and even internationally to Canada and Brazil. This career, which has preoccupied the majority of Jacobs’ life, all started on a dare.

“My cousin and I were invited to this party… and they said we could come only if we came in drag,” Jacobs told Georgia Voice. “That’s how it all started: on a dare.”

Neither she nor her cousin had done drag before, but Jacobs decided to try it out in order to get into the party. That marked her first time in drag, and it wouldn’t take long for Jacobs to start doing it professionally. After hearing about auditions for an act at a new gay bar in Honolulu, The Clouds, Jacobs decided to showcase her skills.

“I wasn’t asked to audition because I didn’t do any shows yet at that point,” Jacobs explained. But the lack of invitation did not deter her. “So, I went in there, brazen as all get-up, and I asked to sing and to emcee, and I got the job!”

Jacobs worked at The Clouds until she was offered a position at The Glade, also in Honolulu, which was bigger and better known than The Clouds. Eventually, in 1970, an opportunity came for Jacobs to travel to the mainland and work at a bar in Kansas City. But, after some bad experiences, Jacobs returned to Hawaii and thought she would “never travel to the mainland again.”

But Jacobs was good at what she did, so the opportunities kept coming. Soon she left Hawaii again to work in Minneapolis, and from there traveled to work in Las Vegas, Atlanta, and even Canada.

“Back in the ‘70s, my head was in a spin! I was going everywhere,” Jacobs said, adding that from there, jobs in different states kept coming, and she traveled to all of them with a group of friends who also did drag: “We had a road crew, maybe there were about ten of us, and we traveled around.”

They started in Minneapolis, then moved on to other jobs in Las Vegas, Edmonton, Canada, and San Francisco. After reaching California again, Jacobs returned to Hawaii.

“This time, I really thought that I’d never return to the mainland,” said Jacobs “But then a great opportunity came up in Los Angeles.”

So, Jacobs returned to the road once again. After traveling to Chicago for a job at The Baton, Jacobs found out that a permanent spot had opened in their show.

A long-term job was just what she was looking for, because “at this point, I was sick and tired of traveling.”

Jacobs auditioned and showcased her singing talents, earning a standing ovation after performing Frank Sinatra’s “My Way,” and was offered a job “on the spot.”

That began Jacobs’ long-term career on the mainland, where she spent many years performing in both Chicago and Atlanta. During her time in Atlanta, Jacobs came to consider the city a second home.

Jacobs first arrived in the city when the performers at The Baton had arranged to switch shows with a bar in Atlanta. She immediately loved it, moved down to Georgia, and spent 25 years working in the city.

“Nobody understood, nobody understands, and nobody ever will understand how incredible Atlanta was back in [the] 1970s to the ‘90s,” Jacobs said. “It was so lively, the gay community was so tight… and we supported each other back then.”

But for all the fond memories, Jacobs also reflected on how difficult it was to be in her profession – or part of the LGBTQ community in general – during those decades. Jacobs vividly remembers queens in LA telling her about their careers, and how they used to have to wear men’s clothes over their drag for their own protection.

“In between this story is the ugly part of what life was back then for people like us,” she said.

Even in Jacobs’ earlier career, things were still difficult. Hormone therapy and gender-affirming surgery were more complicated than they are now, and Jacobs waited a long time to go on hormones out of fear that the treatment could leave her bald.

“It wasn’t an easy life, that’s for sure, by no means,” said Jacobs. “In LA if you got caught walking around in drag, the police would pummel you and take you downtown. It was horrible, and it was demeaning.”

Despite these concerns, Jacobs has faith that her work will continue: “I feel like because I’m still working, I haven’t hit my high point yet.”

You can learn more about Dina Jacobs in her biography, “Forever Her Mother’s Son: The Dina Jacobs Story” by Larry Dwayne Ponder.