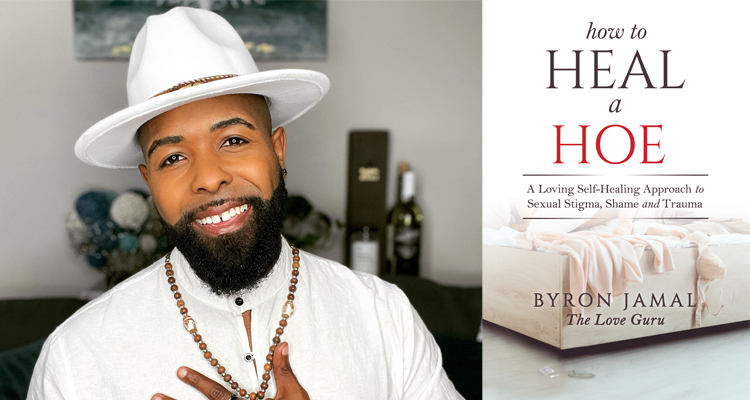 Inspired by his work as a “love guru” and his own sexual hang-ups, former pastor Byron Jamal is healing sexual wounds with his new book, “How to Heal a Hoe.” With his book, the dating coach and love counselor is teaching readers how to overcome the stigma, shame, and trauma of their sexual past.

“From my work with clients and doing my coaching, I realized that a lot of people deal with some form of sexual shame, stigma, or trauma that impacts their relationships,” Jamal told Georgia Voice. “A lot of times we have sex for the purposes of reenacting things that were painful for us or as a coping mechanism. I’m trying to get people to realize that sex is a beautiful thing that can be perverted, but if you do it with the right intention and right heart, you’re able to move past that.”

“How to Heal a Hoe” is made up of four parts — The Making of a Hoe, The Healing of a Hoe, Loving a Hoe, and Hoe Resources — all with the intention of self-healing and creating a new sexual outlook that recognizes sex as a part of healthy self-expression. A “hoe,” in Jamal’s mind, is not someone who is simply sexually promiscuous as the word is conventionally defined. Instead, a hoe is someone who reclaims the word and the ways sex has hurt them, who knows they have a sexual wound that needs healing and believes they are capable of healing it.

“A hoe is anyone who self-defines as one,” he said. “The person has to own it themselves. If you are walking around with a hoe mentality, that means you have done something in your sexual past that [you think] disqualifies you from real love, that is shameful, that you carry as baggage, that you feel like is a dark cloud over your head. You have to own it. This is for anybody who has ever felt like anything in their past — the woman who has gotten a divorce, the man who has slept with multiple people — keeps them from love. This is also for people who have some sort of pain related to sex: anyone who has been molested or sexually abused or assaulted.”

“How to Heal a Hoe” is for everyone, Jamal says, regardless of sexuality or gender identity. As a bisexual man, he knows the importance of intentional inclusivity and thus included a diverse array of client examples ranging from straight to LGBTQ. Despite his past as a former pastor, Jamal doesn’t believe in shaming someone into healing. In fact, he believes sexual shame itself is a wound that needs to be healed and a healed hoe is someone who recognizes the pleasure and beauty of sex.

“Sex is not shameful,” he said. “There’s nothing bad about sex. It’s what brings every human being into the world in some form or fashion. It’s a beautiful thing. As a former pastor, I also bring in the religious element. God created sex. The only function of the clitoris, for example, is to have pleasure, so why would we be created with pleasurable organs if we weren’t meant to have pleasure? God is a god of pleasure, and that is okay … [In churches] it’s a dangerous narrative to only talk about what not to do and to not bring in the dialogue about sex as a healthy thing to do when you have healthy approaches to it.”

“How to Heal a Hoe” does employ some religious messaging and lessons from Bible stories, but Jamal says the book is for everyone regardless of their religious or spiritual beliefs, as long as they “believe there is something beautiful about their body and that there is something that is allowing them to keep existing and explore who they are.”

“The beautiful thing about me leaving the church is that I learned the stories, but I’m able to take Bible stories and break them down in a way that makes sense on an everyday basis,” he said.

After completing “How to Heal a Hoe,” readers will be able to identify their sexual vulnerabilities and find their own path to healing, loving themselves and their bodies as they are. They will be a healed hoe.

“A healed hoe sees sex as something that is a choice they can make that is holistically a part of their freedom of expression,” Jamal said. “It’s you that’s expressing the you-ness that you are in such a way that doesn’t make you feel bad for doing it.

“How to Heal a Hoe” is now available for preorder on Jamal’s website, byronjamal.com.