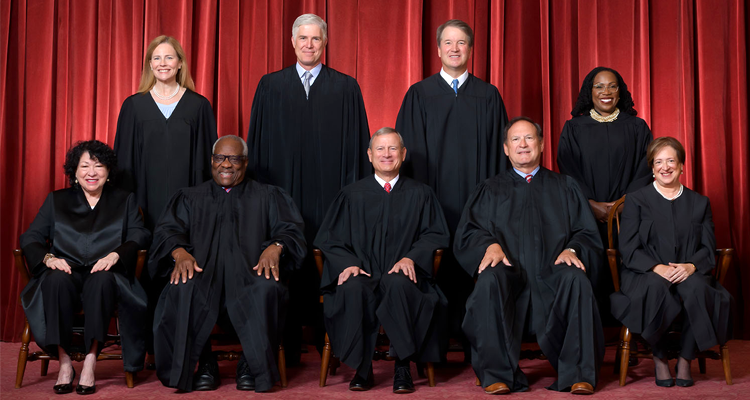 A Guide to the Upcoming LGBTQ-Related Supreme Court Argument

The ordinary rights of LGBTQ people are on the line again at the U.S. Supreme Court –this time on Monday, December 5, with a case seeking to allow any business to deny service to a customer by claiming a personal objection to treating that customer the same as others. The footnotes to this oral argument (see below) are as interesting as the argument itself. But, first, here’s a guide to taking in Monday’s historic event:

When: Monday, December 5, 10am. Seventy minutes have been allotted.

Where: In the U.S. Supreme Court courtroom in Washington, D.C. Some members of the public will be allowed to attend the argument in person but on a first come, first served basis, which generally requires camping outside in a designated line overnight. There are other ways to take in the argument (see below).

The case: 303 Creative v. Aubrey Elenis, the Colorado attorney general. This case was initiated by the Alliance Defending Freedom, a legal group which has focused largely on anti-LGBTQ projects. In this case, ADF sought to restage an earlier case that fell short –Masterpiece Cakeshop v. Colorado—where the group won only a procedural victory. In this case, ADF has asked a web designer to press a preemptive case against the state public accommodations law protecting LGBTQ people, saying that if she did offer wedding page services, she would not want to offer them to same-sex couples because of her religious beliefs.

The appellant: Graphic artist Lorie Smith was recruited by the Alliance Defending Freedom to file this lawsuit even though no same-sex couple had yet come to her seeking a design for their wedding plans. In fact, Smith had not yet even offered to provide wedding site designs for any potential customers. Although Smith said she has had LGBTQ clients, she said she could not do wedding site designs for same-sex couples because of her belief that the Bible prohibits same-sex marriage.

Previous rulings: Both a U.S. District Court and the 10th Circuit U.S. Court of Appeals upheld the Colorado Anti-Discrimination Act (CADA) in this challenge. The 10th Circuit ruled CADA to be a “neutral law of general applicability” and said it is neither unconstitutionally vague nor overbroad and did not violate the free speech or free exercise rights of the plaintiff.

“The court framed the question to presuppose that designing a website for money in a business open to the general public is ‘artistic expression’ rather than an ordinary commercial service,” explained Shannon Minter, legal director for the National Center for Lesbian Rights. “That is a radical departure from existing law. It’s one thing for the court to change the law. It’s another for the court to do so surreptitiously by framing the question in such a highly loaded and novel way.”

The prospects: The current composition of the court – with six conservatives and three progressives – has been aggressively pursuing decisions that square with Catholic and evangelical doctrine. Most notably, the six issued a decision in June overturning two longstanding precedents and, in doing so, gave the green light for states to enact laws prohibiting abortion. One of the six, Clarence Thomas, wrote a concurring opinion urging his colleagues to “reconsider all of this Court’s substantive due process precedents, including Griswold, Lawrence, and Obergefell.” Lawrence struck down state bans against same-sex sexual relations; Obergefell struck state bans against marriage for same-sex couples; and Griswold struck bans against couples using contraceptive. The fact that the court accepted the 303 Creative appeal, even though the plaintiff never had a same-sex couple seeking a wedding web design, suggests an eagerness to fulfill Thomas’ wishes.

How bad could it be: A worst case scenario decision in 303 Creative could allow any business in the public marketplace (hotels, restaurants, bakeries, web designers, etc.) to refuse service to a customer by claiming to have some personal objection to treating that customer the same as all others.

Outcome LGBTQ people would prefer: A much better outcome for LGBTQ people would be for the court to rule that laws prohibiting discrimination in public accommodations protect people with religious beliefs, as well as others, from discrimination and only incidentally implicate free speech concerns. And, as a brief from the NAACP stated: “Public accommodations laws are vital to ensuring free and full access to society and its benefits on an equal basis to all. When merchants exclude individuals from commercial transactions based on their identity—as Petitioner wishes to do here—the excluded individuals suffer a stigma that the law is meant to guard against.”

Footnote 1-Hiding behind a beard: The oral argument comes just two weeks after the New York Times reported that Justice Samuel Alito has for years been carrying on cozy relationships with religious conservative groups. The Times obtained a June 7 letter from a former anti-abortion activist to Chief Justice John Roberts in which the activist claims that Alito leaked the outcome of a 2014 religious exemptions case to a personal gathering of anti-abortion donors at his home. The leak enabled anti-abortion groups to move swiftly to capitalize on the decision in Burwell v. Hobby Lobby. Alito wrote the 5-to-4 majority decision and denied leaking the opinion which held that a federal law may not require a closely held commercial employer to provide health insurance coverage for contraception if that employer claims that to do so violates his or her personal religious beliefs. LGBTQ legal activists said the decision was a “dangerous and radical departure from existing law” with repercussions for LGBTQ employees. Alito, who told an audience in Italy last summer that attacks on religious liberty grow out of “a tendency to distrust and dislike people who are not like ourselves,” was almost unrecognizable due to his newly adopted facial hair.

Footnote 2-Up front and center: Ten transgender lawyers are scheduled to be sworn into the U.S. Supreme Court Bar just days before the historic 303 Creative argument. The plan to swear in transgender attorneys as a group was initiated two years ago but delayed because of the pandemic. To be sworn into the Supreme Court bar, an applicant “must appear to the Court to be of good moral and professional character,” according to the Supreme Court’s application instructions. The application asks applicants to indicate if they have ever “changed your name or been known by any name or surname other than those appearing on this application.” The ten transgender attorneys include Rook Ringer from Florida, Jesse McGrath from California, Ames Simmons from Georgia, and Zsea Ofure Bowmani from Illinois.