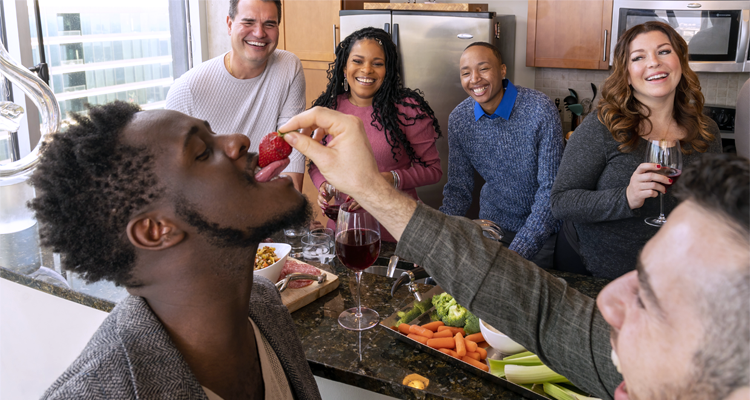 Ahead of Black History Month, There Are Many LGBTQ People to Celebrate

This year, we’re getting an early start on Black History Month, which begins in February. The month has served as a linchpin in our community and a chance not only to connect our current lives to the past, but also to celebrate how far we have come. Year after year, we triumph over our struggles and conquer new challenges facing the Black community, both in the United States and abroad. This doesn’t go without acknowledging how much work remains. We have entered a new era in social responsibility and human rights, and that poses an opportunity to amplify gay and queer representation within Black spaces.

Here are some of our favorite Black LGBTQ people who are making a name for themselves:

A proud, gay rapper, Santana has edged his way into mainstream success without faltering from authenticity. At every turn, he has been ultra-femme and what most would call “flamboyant” in an industry where neither are celebrated. Anyone familiar with rap knows how hypermasculine it is and how historically uncomfortable it can be for many queer individuals. Artists like Santana are necessary for our progression as society. His fearlessness coupled with his undeniable talent are rare. His intention for trans women to be visible in his projects defies all standards in the rap industry, making him both icon and inspiration.

POSE! I mean, can you think of a more visible gay actor? Beyond his bravery in living proudly as HIV+, his eclectic and feminine-forward persona is one that many of us desperately needed as a kid. He has broken the countless barriers in Hollywood that prohibit expressing yourself, being out and about, and living in your truth. He has successfully merged his personal expression into his performance, and it is beautiful to watch. His execution is done in a way that throughout history many had to do under the veil of a “double life.” Porter is sure to set the tone for what it means to live boldly.

The GOAT. He came out so bravely, and I have been more than impressed by the way he has produced his image. The intention behind every necessary stunt is more than just to make people gasp; it is an intention to make people question their view of queer people in the world. Lil Nas X could’ve easily lived a masculine, straight-presenting life, but he chose to do the opposite. On the cusp of superstardom, he chose to come out as gay. This is strength in the face of adversity. He now joins the iconic Porter on red carpets — amplifying the narrative of being unapologetically queer — and gives light to the struggle of being Black and gay. His brand inspires and celebrates with people everywhere. He is the future.

Lena Waithe is a Chicago-born actress, producer, and screenwriter who is well known for her Showtime series, “The Chi,” and BET comedy series, “Twenties” and “Boomerang.” She also wrote and produced the love-crime film, “Queen & Slim.” In 2017, she was the first Black woman to win the Primetime Emmy Award for Outstanding Writing for a Comedy Series. Lena has continued to amaze the world with her creative brilliance. Our community appreciates the gift of hope in her storytelling.

Dana Elaine Owens, better known as “Queen Latifah,” became a force in 1989 when she released her debut album, “All Hail the Queen.” Today, Queen Latifah is one of the greatest rappers, singer-songwriters, actresses, and producers of our time. Her dominant lesbian role in “Set It Off” had everyone speculating about her sexuality. While never feeling the need to discuss her personal life, in 2021 she received the BET Lifetime Achievement Award and during her acceptance speech she acknowledged her partner Eboni Nichols and ended her remarks with “Happy Pride!” She unwaveringly shows grace and elegance in her identity.

The Honorable Lori Elaine Lightfoot is the 56th mayor of Chicago. Lightfoot also served as president of the Chicago Police Board and chair of the Chicago Police Accountability Task Force. Married to Amy Eshleman, Lightfoot is the first Black lesbian woman in the U.S. to be elected mayor. She wears her Pride as a badge of honor, even in a political environment. Her authenticity speaks volumes about her tenacity. Whether it’s being a grand marshal at the Chicago Gay Pride Parade or holding a press conference in a two-piece suit, we see her outstanding work and appreciate her influence on our Black lesbian community!

Dante is a founding host of The Gayly Dose, an Atlanta-based podcast hosted by an all-gay cast. Lakisha is new to the podcast and joins in Season Two as cast member of “A Dash of Lesbian,” which airs every other Friday. Unique in its mission and follow-on format, weekly episodes of The Gayly Dose are known for their real conversations about things that matter to the community and their listeners. Purposefully candid and brutally honest, the cast speaks on a range of topics, including monogamy, body issues, coming out, dating apps and growing up gay in the church. Listen at thegaylydose.com.