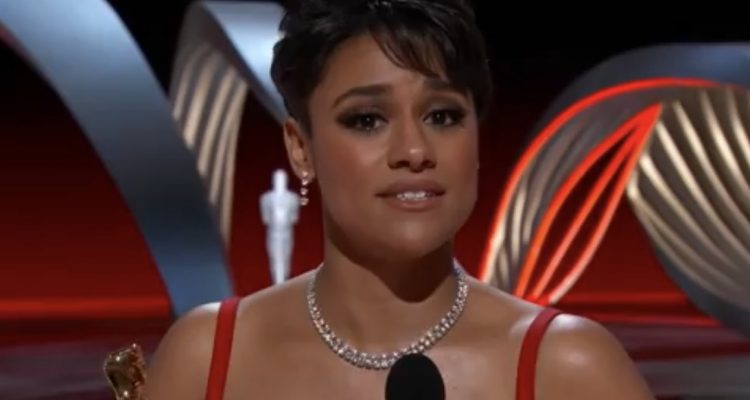 In the midst of anti-LGBTQ legislation being introduced and passed across the country, several celebrities at Sunday night’s (March 27) Oscars awards took the opportunity to signal their LGBTQ support.

The bill bans any classroom discussion around gender identity or sexual orientation in grades K-3. Some protestors of the bill have taken to shouting “gay, gay, gay,” in response, as the hosts did.

"WE'RE GONNA HAVE A GREAT NIGHT TONIGHT—AND FOR YOU PEOPLE IN FLORIDA, WE'RE GOING TO HAVE A GAY NIGHT."pic.twitter.com/pcjhQGRXDT

Ariana DeBose made history when she took home the Oscar for Best Supporting Actress for her portrayal of Anita in Steven Spielberg’s adaptation of West Side Story. She is the first openly queer woman of color to win an Oscar.

In her acceptance speech, DeBose highlighted her sexuality, saying her win confirmed “there is…a place for us.”

“Imagine this little girl in the back seat of a white Ford Focus,” she said. “Look into her eyes, you see an openly queer woman of color, an Afro-Latina who found her strength in life through art, and that’s what I believe we’re here to celebrate. So, to anyone who has ever questioned your identity, or if you find yourself living in the grey spaces, I promise you this: there is indeed a place for us.”

"So to anybody who has ever questioned your identity [. . . ] or you find yourself living in the grey spaces, I promise you this — there is indeed a place for us." #Oscars pic.twitter.com/45aORd2Gkk

DeBose and actress Kristen Stewart (who was nominated for Best Actress for her role in Spencer) both made history with their nominations, as it was the first time in Oscar history that two openly queer actresses were nominated for acting awards in the same year.

Jessica Chastain also spoke out in support of the LGBTQ community in her acceptance speech. While accepting her award for Best Actress for her portrayal of iconic LGBTQ advocate Tammy Faye in The Eyes of Tammy Faye, Chastain highlighted the current crisis of anti-LGBTQ violence nationwide.

“Suicide is a leading cause of death in the United States,” she said. “It’s touched many families; it’s touched mine. And especially members of the LGBTQ community, who oftentimes feel out of place with their peers.”

Chastain went on to draw attention to the “discriminatory and bigoted legislation that is sweeping our country with the only goal of further dividing us” and the “violence and hate crimes perpetuated on innocent civilians all over the world.”

“…I’m inspired by [Tammy Faye’s] compassion, and I see it as a guiding principle that leads us forward,” she said. “It connects us all in the desire that we want to be accepted for who we are, accepted for who we love, live a life without the fear of violence or terror. And for any of you out there who do, in fact, feel hopeless or alone, I just want you to know that you are unconditionally loved for the uniqueness that is you.”