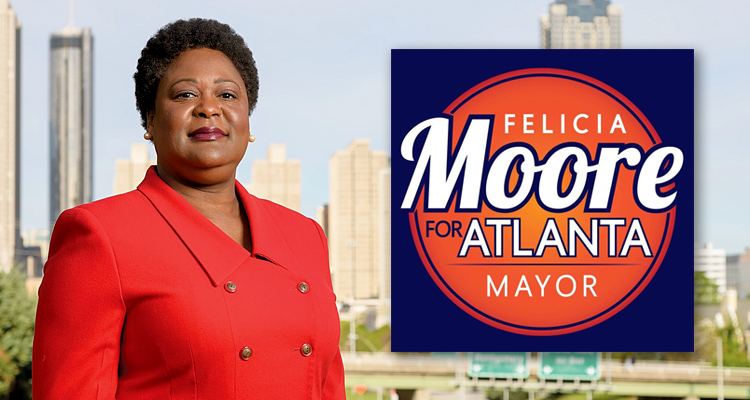 Moore plans to address crime and HIV/AIDS issues in the city.

Come November, Atlanta will once again be voting for mayor. Atlanta City Council President Felicia Moore announced earlier this year that she will be in the running against incumbent Keisha Lance Bottoms.

Moore has a track record of more than 20 years of public service after being elected in 1997 as a member of the Atlanta City Council. After serving five terms, Moore was elected in 2017 as City Council President. Over the years, Moore has garnered multiple awards for her public service, including being named one of the Outstanding Women in Leadership by the Lt. Governor of Georgia in 2019 and 2021’s Most Influential Georgian by Georgia Trend magazine.

Now, Moore is looking to keep moving on up and serving the people of Atlanta more directly. Moore told Georgia Voice that she’s been preparing to become Atlanta’s mayor since last year’s presidential election.

“[I]t was apparent that [Mayor Bottoms], who had spent a lot of time supporting now-President Joe Biden, was interested in a vice-presidential post and later, a Cabinet post,” Moore said. “The way our charter reads is that the president would fulfill the unexpired terms of a mayor. I’m someone that likes to be prepared, so I started preparing to be mayor. Then, as time went on, that didn’t occur.”

“I made the clear decision to continue to run for Mayor because I’d been hearing from citizens, business owners, and [City] employees that they felt neglected or not tended to,” she continued. “I wanted to be in a position to get things done.”

Moore’s platform includes a few key issues, foremost among them being public safety. She says this platform was directly influenced by her constituents.

“My platform is informed by the people and will be developed by what the citizens want,” she said. “I have to speak to the issue of the day, and people want to hear about what we’re going to do about crime.”

Her public safety platform uses a four-pronged approach, addressing issues with police, perpetrators, places, and the people. Along with public safety, Moore is advocating for partnership with Atlanta schools, accountability, fiscal stability, ethics, and transparency.

In terms of LGBTQ issues Moore plans to address, she is keeping her focus on HIV/AIDS. In particular, she wants to address issues she sees with the management of Housing and Opportunities for People with AIDS (HOPWA) funding.

“I just don’t understand why we can’t get it right,” she said of the HOPWA program. “It seems to me to be a managerial issue. I want to, as Mayor, get in there and get this fixed.”

Moore believes HOPWA can be strengthened with her three-pronged approach: First, getting money into the hands of providers who have been backlogged. Second, developing the system so providers can be reimbursed in a timely manner. Third, having the City itself look at more innovative ways to find locations to house people.

“If we run into an issue with a provider and someone needs emergency housing, [the city] should have an opportunity to do that,” she said.

Atlanta’s LGBTQ community plays a significant role not only in Moore’s platform, but in her campaign as well.

Moore’s campaign currently boasts over a thousand volunteers. Anyone interested in volunteering can do so in a number of areas, including LGBTQ voter outreach. She urges prospective volunteers to register through her website, feliciamooreformayor.com, but you can also get connected on Facebook at Moore for Mayor and Volunteers for Felicia Moore.

“I believe my message of change and my vision for Atlanta will be enthusiastically embraced throughout the city,” Moore said. “I am ready to be the next Mayor of Atlanta.”