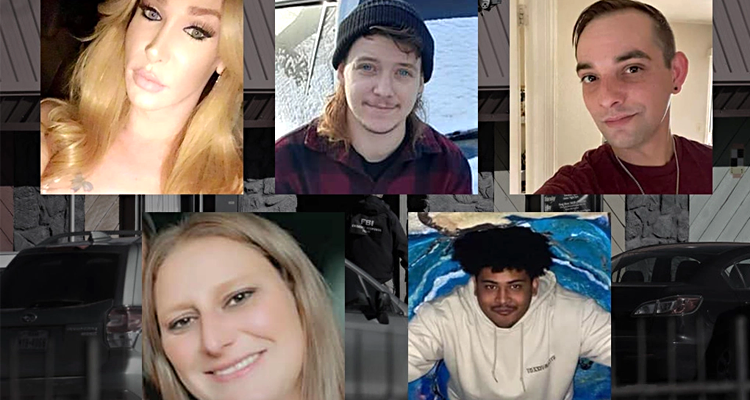 I am not very experienced with grief. It is only as I have begun to become an adult (I am only 24) that I have come to know grief, to carry it with me and to understand that living is grieving, every day, over and over. It is inescapable, and it is all the time. I have come to understand that grief feels to me like anger and fear, and as I have struggled to find a place of grief in the landscape of my emotional psyche — of true mourning for Daniel Davis Aston, Raymond Green Vance, Kelly Loving, Ashley Paugh, and Derrick Rump — it is anger and fear that I have felt.

As I am writing this, I struggle to know how to put a feeling so hot, so thick, and so sickening into words. So, I will be parroting the words of others — the words from people far more eloquent than I, who have been crucial to how I have processed my fear and anger into mourning.

I am sure I do not have to explain to you why I am scared and angry. I am scared it’s going to happen again, and I am angry because I know that the path our country is on will allow this kind of tragedy to happen again. It was only a matter of time until something like this happened, until the extremist fearmongering of the far right enabled — no, empowered — someone to murder queer people (to even say it was a matter of time isn’t actually correct, as this has been happening, consistently, and especially to Black trans women). Every single far-right pundit who has profited off of the vilification of queer people, drag queens, and trans women has blood on their hands — and they’re fucking proud of it.

As @2gay2lift on Twitter wrote, rhetoric from right-wing talking heads has not sought distance from the tragedy, but instead has positioned it as a natural response to the supposed “pedophilia” and “grooming” endemic to the LGBTQ community: “So apparently the right wing are skipping the usual ‘They had nothing to do with us’ rhetoric and are instead going with ‘Maybe if all gay people stopped being pedophiles then you wouldn’t get shot so much.”

Even right-wingers know this was not a random act of violence. All the anti-trans bills, all the Don’t Say Gay bills, all the drag queen story hour protests, all of it ends in violence because it is all rooted in violence. There is a war against the LGBTQ community, with every single LGBTQ person positioned as a threat. And how in this country do we respond to threats? With death.

“The ultimate conservative grift is to be able to incite mass death [with] a wave of your hand, face no consequences for doing so thanks to the protection of every institution imaginable, and still manage to position [yourself] as a countercultural victim being threatened by the big bad left,” writer Rayne Fisher-Quann said on Twitter. The right-wing logic is one inherently rooted in victimhood, and when you take the psychological place of the victim, you can do no wrong. You can never face any real accountability — even in matters of life and death — when you think the entire world is out to get you and you’re only, in your mind, defending yourself, your children, and your family.

The murders of Daniel, Raymond, Kelly, Ashley, and Derrick were political, and I am so mind-numbingly angry about that. But their deaths are not political. They are five people who lived and who are now gone, who have been lost by those who love them. They live in every single one of us who walks into a gay bar, who is publicly queer, who is reading this right now. We can only honor their humanity by opening our hearts up and allowing the excruciating pain of mourning to pour in.

“They should still be here,” @gendersauce wrote on Instagram. “They should be combing their hair or taking their T or kissing a friend or eating breakfast. They should be folding the wash or painting their nails or walking the neighborhood just to feel the cold. They should be hungover in bed or laughing or calling their mom. They should be here. They should be alive. They were alive. Feel the grief. You don’t have to be a stone. Say I love you to your trans community. Light candles for the beloved dead. Do not let your heart go silent.”

As angry and as fearful as I am, and as overwhelming as those feelings can be, I remember that even when evil thrives on Earth, it will never thrive in death. Daniel, Raymond, Kelly, Ashley, and Derrick have returned to the loving fabric of the universe, where there is only peace, honor, rest, and reprieve. I pray that the people who love them are granted the space to love them through full, open, and unadulterated mourning. And I pray that something changes, something unforeseen shifts the tides of our country toward protection, so that no more lives are stolen in the name of political inhumanity. It isn’t until then, and only then, that there will there be any justice.

Find fundraisers to support the survivors and families of victims at gofundme.com/c/act/colorado-springs-club-q-shooting.