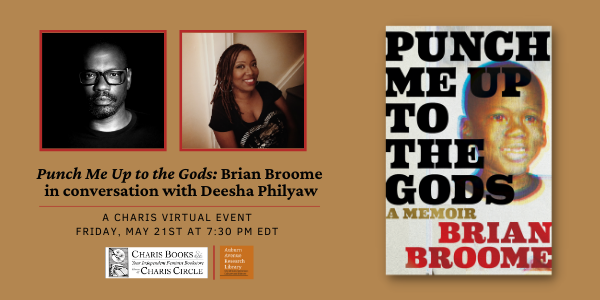 Award-winning author Brian Broome has been sober for eight and a half years. Before his sobriety, his struggle with depression and anxiety caused him to turn to alcohol and drugs until addiction landed him in rehab. It was there where he began to write his newly released memoir, Punch Me Up to the Gods.

Broome’s coming-of-age memoir is a collection of narrative essays, detailing what he calls “watershed moments” from throughout his life that were symbolic of how he ended up in rehab.

“It covers my struggles as a Black gay man to navigate a world of homophobia, racism, sexism, and addiction,” he told Georgia Voice. “These are cautionary tales. These stories are embarrassing and cringeworthy… I want to show people that there is help available. If I can get sober, anyone can get sober.”

His stories cover themes of race and masculinity, inspired in part by Gwendolyn Brooks’ poem “We Real Cool.”

“I found that poem late in life, just a few years ago,” Broome said. “When I read it, it spoke to me as kind of a treatise on Black masculinity. It talks about what ‘cool’ is: being good at sports, drinking, all these things that are stereotypically masculine things… Every line of the poem spoke to me and plugged into the story that I was already writing.”

Broome experienced a disconnect between him and traditional masculinity growing up that made him question what masculinity truly is, something he says is a common experience among Black men.

“The way that I viewed [masculinity] growing up was just as this unattainable thing that has all these rules and regulations and restrictions that I couldn’t live up to,” he said. “I don’t think that’s particularly because I was gay, I think a lot of Black men, regardless of sexuality, feel this way. I just stared to question: what does this idea of masculinity, and in particular hyper-masculinity, mean? With Black men, there’s more pressure to be more masculine than men in general, as a result of American racism.”

Broome will be discussing these themes and more in conversation with fellow author and friend Deesha Philyaw on Friday, May 21 at 7:30pm. The virtual conversation is hosted by Charis Books and More. The event is free and open to everyone, but donations to Charis Circle, Charis’ programming non-profit, are encouraged and appreciated. The conversation will take place via Crowdcast, Charis’ virtual event platform.

“I expect [Philyaw] to really dig deep into the content of the book, why I wrote it this way, and what it means to me,” Broome said of the event. “I think we’ll talk about race, sexuality, gender identity, and masculinity. I think we’ll cover it all. I expect it to be a great conversation.”

You can register for the event here, and you can buy Brian Broome’s book Punch Me Up to the Gods: A Memoir online at charisbooksandmore.com.