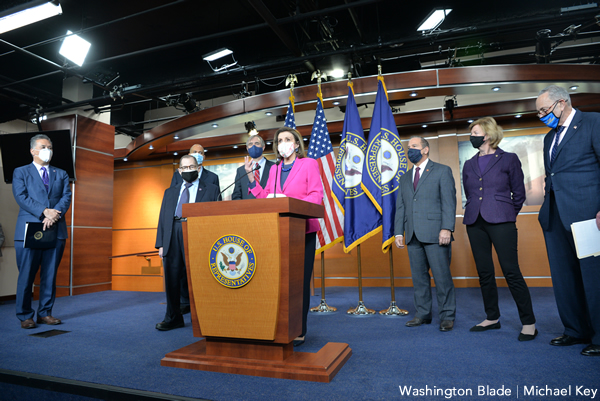 The U.S. House of Representatives on Thursday approved a bill that would add sexual orientation and gender identity to the Civil Rights Act of 1964.

“This long overdue legislation will provide millions of LGBTQ Americans explicit protections from being denied medical care, fired from their jobs, or thrown out of their homes simply because of who they are,” said U.S. Rep. Jerrold Nadler (D-N.Y.) as he spoke in favor of the Equality Act that passed by a 224-203 vote margin. U.S. Reps. John Katko and Brian Fitzpatrick of New York and Pennsylvania are among the handful of Republicans who also backed the bill.

“We rise to tell our LGBTQIA community that not only do you matter, but you are loved and you are cared for,” said U.S. Rep. Cori Bush (D-Mo.). “And we got your back.”

Georgia Congresswoman Marjorie Taylor Greene is among those who have expressed their strong opposition to the Equality Act. The Washington Blade earlier this week reported U.S. Rep. Chris Stewart (R-Utah) will reintroduce the Fairness for All Act that mainstream religious denominations support.

“This is a defining moment in our nation’s political history and soon U.S. senators will decide their legacy on equality for LGBTQ people,” said LGBTQ Victory Institute President Annise Parker in a statement. “History is not kind to those who oppose or filibuster civil rights legislation and excuses won’t pass muster with future generations.”

“We applaud the House vote on the Equality Act, and but we now look to the Senate and begin in earnest what should be a bipartisan effort to protect LGBTQ people,” said Johnson. “This is what we know: LGBTQ people in 29 states are not protected by anti-discrimination laws. This patchwork of equality is indefensible — the Equality Act must be passed by the Senate so all LGBTQ Americans will be protected from discrimination.”