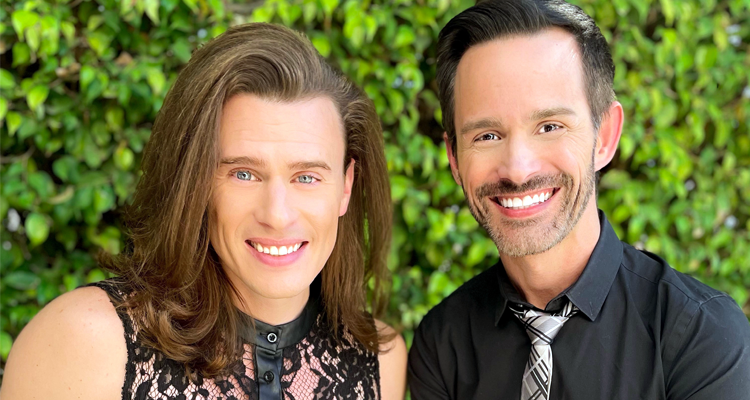 “I Dreamed a Dreamgirl,” a musical extravaganza by self-proclaimed “semi-professional homosexual” Emerson Collins and “recovering child co-star of the ’90s” Blake McIver, is now touring the Southeast with a stop in Atlanta on August 6.

The show celebrates the couple, who both have extensive careers in showbiz, by literally combining their two unique styles and personalities into a collection of medleys, duets, stories, and joy. The idea for the show was born of a joke the two made almost nine years ago.

“We joked about, if we ever did a show together, our voices and style choices are so different, what could we possibly do together?” McIver told Georgia Voice. “This title actually started as a joke. My favorite show is ‘Dreamgirls,’ and his favorite show is ‘Les Mis.’”

Thus, “I Dreamed a Dreamgirl” was born. As the name suggests, the show consists of medleys composed by Collins and McIver that combine their styles and poke fun at their differences. In the 90-minute running time, they perform all or part of 49 different songs, from show tunes to standards.

“There’s a little bit of everything,” McIver said. “It does represent the overlaps and discrepancies in our tastes and styles.”

The show pays homage to the couple’s respective careers; there’s a Rent medley in honor of Collins’ stint in Rent Live, a reference to “The Little Rascals” (McIver played Waldo in the1994 film), and a 16-song TV theme song medley, referencing the couple’s experience on Bravo’s “The People’s Couch,” the first project they worked on together.

It’s also an earnest look at the men behind the glitz and glam veil of show biz.

“We wanted to let each of us be who we are, having fun together and wanting you to enjoy it with us,” Collins said. “It’s a lot of singing, but we’re not presenting something at you. We’re not trying to get you somewhere. We’re just trying to share with you.”

“It’s honest, there’s no artifice or pretense in this show,” McIver added. “There’s always a certain amount put on in shows to manipulate the narrative and whatnot. We do none of that in this; it is legitimately us telling you our unvarnished stories and singing about them.”

More than anything, though, it’s going to be fun.

“When we put the show together, we said we only want to do things we genuinely find fun,” Collins said. “If no one comes, if we’re on stage by ourselves for 90 minutes, will we enjoy every moment of this? Anything we ‘should’ do but doesn’t sound fun, we’re not doing. So, we found fun ways into the career things, and then the rest of it is like, this is hilarious to us, so we hope you enjoy it.”

“I Dreamed a Dreamgirl” is showing at Out Front Theatre Company Saturday, August 6 at 8pm before traveling to Savannah’s Club One on August 10, the Winston-Salem Theatre Alliance in North Carolina on August 13, Biloxi Little Theatre in Mississippi on September 17, and AllWays Lounge in New Orleans on September 18. For tickets, visit emersoncollins.com/tour.