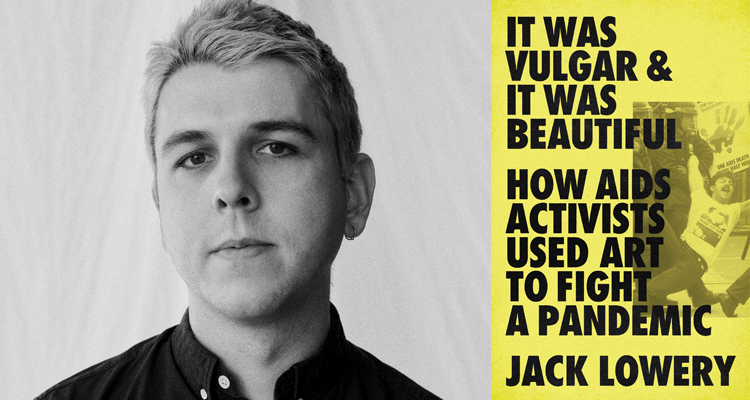 Above: Author Jack Lowery Photo by by Gregory Wikstrom; Right: “It Was Vulgar & It Was Beautiful” / Courtesy image

‘It Was Vulgar & It Was Beautiful’: Jack Lowery’s Debut Looks at Gran Fury’s Art and Propaganda

Jack Lowery’s debut book, “It Was Vulgar & It Was Beautiful: How AIDS Activists Used Art to Fight a Pandemic,” clears up a hitherto opaque view into Gran Fury, a collective of artists who designed famous images for the AIDS Coalition to Unleash Power (ACT UP) in the 1980s and ’90s. But more than that, Lowery explores the boundaries between art and propaganda, taking Gran Fury’s posters and seeing how they can represent both the beauty of a painting and the vulgarity of a political slogan.

Gran Fury first started in New York as the Silence=Death Project. Its famous 1987 poster featuring the movement’s name and the pink triangle used to signify homosexuals in the Holocaust had a powerful impact on public consciousness and brought attention to the AIDS pandemic. However, as this poster — along with much of Gran Fury’s later work — has become historicized, it is often presented devoid of the historical and personal contexts from which it was born.

“I think a lot of people encounter Gran Fury’s work in a museum setting,” Lowery told Georgia Voice. “In particular, it is often divorced from Gran Fury’s mission. Their work was meant to be used, it was meant to be out in public. But it also was meant to be about what was happening in the AIDS crisis and ACT UP at that moment, or how the work speaks to it or reflects it or challenges it or pushes it forward. That’s something I see missing a lot.”

“It was Vulgar & It Was Beautiful” occupies this vacant space Lowery saw in the conversation about Gran Fury, illuminating contexts often left in darkness. Lowery states in the book’s introduction that he will follow the 11 individuals who made up the collective, but his telling of their story begins with the partners and friends they lost. In this way, “It was Vulgar & It Was Beautiful” emphasizes not just the creative minds behind the art but the personal and sociopolitical forces that propelled Gran Fury in its mission to fight against AIDS.

Indeed, Gran Fury had an explicit mission with its art that makes it teeter on the edge of propaganda. Avram Finkelstein, one of the founding members of Silence=Death and Gran Fury, even says in Lowery’s book, “Before anything else, I am a propagandist,” and that he “will do anything to get a point across.” Gran Fury was a part of the battle to bring attention to the AIDS crisis and to eliminate the disease; its posters were designed using marketing tactics to make participating in this battle as appealing as possible. Distinguishing the collective’s art from propaganda is thus a difficult task.

But when it comes to Gran Fury, this distinction between art and propaganda seems to fade away. After all, the subtitle of Lowery’s book is “How AIDS Activists Used Art to Fight a Pandemic,” not how they used propaganda.

“Gran Fury would use the terms art and propaganda interchangeably,” Lowery said. “Some of their pieces leaned toward one side more than the other. But I don’t think they have to be exclusive.”

Gran Fury’s work does indeed show that art’s suggestiveness and propaganda’s messaging do not have to be in conflict with one another. As Lowery shows in his book, when Gran Fury started as the Silence=Death Project, its work was meant to bring attention to AIDS, to get people discussing and thinking about it so as to destigmatize the disease. Asking people to talk and demanding them to think a certain way are two different things. “One thing that Gran Fury did that I found myself continually compelled by when writing this book was that what they were often trying to do was to get people to think differently about a particular issue or topic and not just tell you to vote ‘no,’” said Lowery.

Lowery works alongside Gran Fury in “It Was Vulgar & It Was Beautiful,” getting people to think differently about the group’s work and the AIDS epidemic by providing insight into lives of the collective’s members and the community of people they helped to survive.