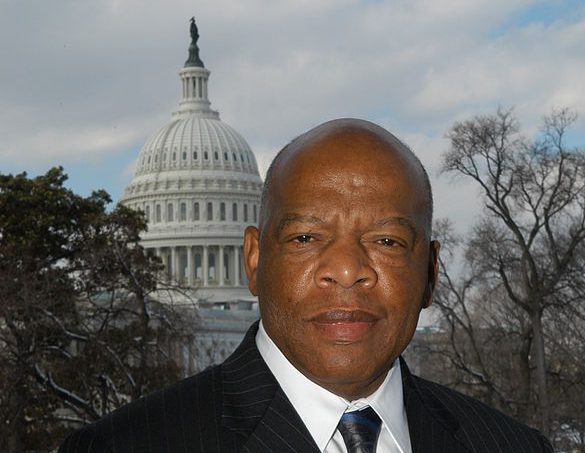 Civil rights hero and staunch LGBTQ ally John Lewis has died at the age of 80 after a battle with pancreatic cancer.

Lewis, who served 17 terms in Congress as a Democratic Representative of Atlanta, was born to sharecroppers in Troy, Alabama in the ‘40s. He was a founding member of the Student Nonviolent Coordinating Committee and helped organize the March on Washington, the civil rights march where Martin Luther King, Jr. gave his “I Have a Dream” speech. Lewis was the last survivor of the “Big Six,” a group of history-making civil rights activists led by Dr. King.

The congressman was a longtime ally of the LGBTQ community, supporting same-sex marriage in the early 2000s, more than a decade prior to the Supreme Court decision for marriage equality. In an editorial he wrote for the Boston Globe in 2003, he compared the fight for LGTQ rights to the civil rights movement: “I’ve heard the reasons for opposing civil marriage for same-sex couples. Cut through the distractions, and they stink of the same fear, hatred, and intolerance I have known in racism and in bigotry. I have fought too hard and too long against discrimination based on race and color not to stand up against discrimination based on sexual orientation.”

In his later years, Lewis cosponsored and advocated for a number of LGBTQ rights bills, including the Employment Non-Discrimination Act, Respect for Marriage Act, and the Early Treatment for HIV Act.

Last month, he celebrated the landmark Supreme Court ruling that federal civil rights law protect workers from discrimination on the basis of sexual orientation and gender identity.  “[The] Supreme Court Decision restores my hope in Dr. Martin Luther King, Jr.’s conviction that the arc of the moral universe is long, but it bends towards justice,” he said. “Although I am encouraged by this opinion, we all know that much work remains. It is impossible to ignore tat deeply rooted structural inequality, xenophobia, and bias continues to permeate our nation, and LGBTQ people of color—especially transgender women—experience violence, discrimination, and socioeconomic disparities at alarming rates.”

The most humble of heroes, the most brave of giants. @repjohnlewis loved unconditionally and called upon us all to be a better version of ourselves. He was my Congressman and my best example of true servant leadership. I am grateful for his life and the joy of having known him. pic.twitter.com/HC23WElOtV

Raised sharecropping in Troy, AL, he fought for the people his whole life with a huge and loving heart.

He put it all on the line over and over again to better this world for all humanity.

Congressman Lewis, we love you. pic.twitter.com/4iOasnQAMy

This is the man that taught us all how to get into some #GoodTrouble. One of my heroes. A true legend. Thank you for teaching us how to fight for liberty & justice for all mankind. This photo was taken at the @HRC Dinner in DC 2016 right before the world blew up. RIP #JohnLewis pic.twitter.com/8BPFqCb5eA

This interview with Congressman John Lewis — in front of a live audience in Kentucky in October 2013 — was one of the most memorable and moving experiences of my professional life.

It feels just impossible to lose him at a time when we need him so much.https://t.co/QO2kEwLVvz

“When I was elected President of the United States, I hugged [Lewis] on the inauguration stand before I was sworn in and told him I was only there because of the sacrifices he made,” Obama said in a statement. “And through all those years, he never stopped providing wisdom and encouragement to me and Michelle and our family. We will miss him dearly.”