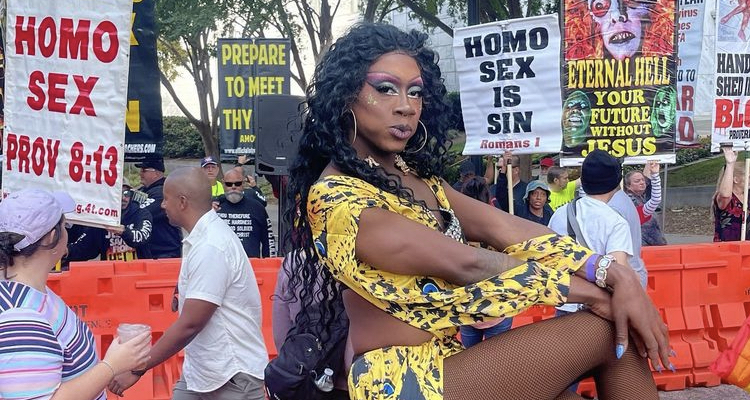 “Southern. Black. Queer. That’s how I identify,” Zavier Mason, 27, (@canzara_szn) said in an interview with Georgia Voice. Mason, who performs under the pseudonym Canzara Szn, moved to Atlanta in 2017 after graduating with a bachelor’s degree in Psychology and Biology from the University of Alabama.

By day, Mason works as a project coordinator for the Rollins School of Public Health at Emory University. They spend their days researching behavioral science, educating the public on why barriers to STD testing and safety exist, and resources to circumvent those barriers, which includes access to PrEP.

Their mission to educate and provide access to STD testing and treatment is personal. Zavier is HIV-positive and very open about their status.

“I am very upfront about who I am,” they told Georgia Voice. “Not everyone is as open as me, so I wanted to create a space for other people going through it, especially in Atlanta.”

In Atlanta, one in 51 people “may be infected with HIV/AIDS at any given time,” according to the CDC. On Dec. 1, World AIDS Day, the CDC listed Georgia as No. 1 for new cases of HIV/AIDS. In 2020, the CDC reported that over 60,000 Georgians live with HIV. Black people in the South made up 72% of new cases, Latino people made up almost 10%, and white people made up 16%.

Even though HIV/AIDS can be survived if caught early and treated quickly, the health care system in Georgia proves to be ineffective at providing necessary assistance and access to adequate medical care. Gov. Brian Kemp implemented a “work requirement” on the joint federal and state program Medicaid in Nov. 2022, following his reelection. The plan requires individuals to work or volunteer for a minimum of 80 hours per month to access Medicaid. Georgia is the only state in the country with this restriction. Without access to health care, many people are not able to work, which leaves them vulnerable to financial and health problems.

By night, Mason performs in drag shows across Atlanta, using their platform to educate people on the HIV/AIDS epidemic happening in the South.

When they first moved to Atlanta five years ago, it wasn’t long before they discovered the diverse drag scene that finds a home in Atlanta. On their first outing in drag, they won second place in the 2019 Peach Pit Pageant, hosted by Southern Fried Queer Pride.

“I used the freedom I saw on the drag stage to bring myself up after a few depressive months,” they said. “Instead of building myself up, I built up ‘Canzara.'”

Since then, Canzara Szn has been making waves in the Atlanta drag scene; you may recognize them from the House of ALXNDR (@houseofalxndr).

“My research and my drag are for the same people,” Mason said. Their life is dedicated to supporting and being a part of the vibrant LGBTQ community in Atlanta, which they credit for allowing them to be themselves.

Mason stressed the importance of community for everyone, especially young queer people in the South.

“It takes time to find [community], but I feel that the only reason that I have the strength to be authentic is because there are people in my corner that support me,” they said. “Not to say that it’s not scary, or that people don’t walk away … it just doesn’t matter because I have my community.”

One of their favorite moments in drag was when anti-LGBTQ protestors gathered at the Human Rights Campaign PRIDE Luncheon and Mason took center stage as Canzara posed in front of the crowd.

“Authenticity is power,” they said of their openness, which has allowed them to help others find the help and resources they need. “Existence is resistance.”