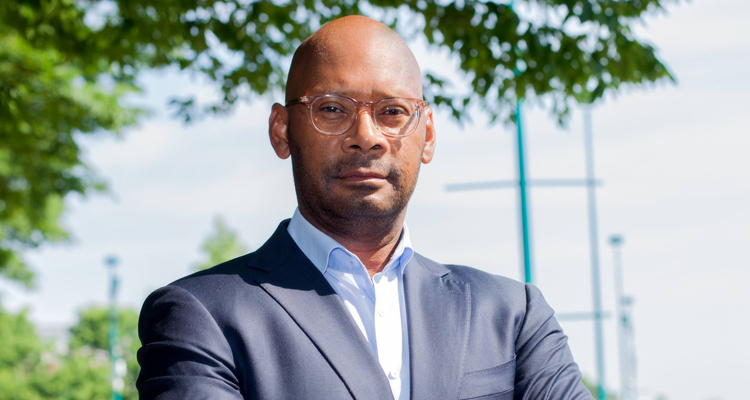 Originally from Oklahoma, Russell moved to Germany as a child after his father joined the Army. Upon graduation from Campbell University in North Carolina, he entered the military as well and retired after reaching the rank of lieutenant colonel and serving in the U.S. and abroad. He now resides in Atlanta with his husband, Jarno Oostingh.

Russell believes his experience as a leader within the military police and as a base operations officer, providing city services on Army installations, sets him apart as a candidate for city council president. He spoke to Georgia Voice about his campaign and experience.

“I’ve run police stations, I’ve worked from the local level to the international level with police forces, I’ve taught soldiers how to be police officers,” he said. “I see that as a very unique skill set in helping the Atlanta City Council to be able to perform their oversight role over the Atlanta Police Department under city services.”

Russell has experience with more aspects of running a city than law enforcement, too. In some of his later roles in the military, he oversaw other services. As he rose in rank, he gained responsibility for services like fire departments and even, on some bases, hundreds of civilian security guards.

By Russell’s estimation, crime and city-service infrastructure are chief concerns for Atlantans, and he sees himself as the man for the job.

“The number one issue on everyone’s mind is crime, and I think second to that, people I’ve talked to are very upset about the poor city services that they receive right now from the City of Atlanta,” he said.

In general, Russell’s campaign goals and positions center heavily around the issues of public safety and crime. The ideas set forth on his campaign website include embracing community policing, offering police officers enhanced training, and updating technology such as the 911 system, security cameras, and body cameras.

“I truly believe that the first responsibility of government is public safety, and we’ve got to get this fixed right now,” he said, noting conversations with supporters and even local business owners whose primary concern is crime in the city.

Some other important stances of his include those on education, which he sees as “the gateway to success.” On education, Russell advocates both for school choice and improvement of public schools, asserting the responsibility of parents to be involved in their children’s educations.

“Parental involvement and homelife are the foundation upon which our civil society is built, and education is a key part,” he says on his campaign website.

Another central priority of his campaign is race relations, and on that topic, Russell hopes for “the same standard for everybody.” He seeks unity in the city and sees the path forward as one in which everyone is judged based on two traits: merit and character.

“In order to unite our city, we must treat everyone the same; everyone must be judged by one set of rules and held to the same standards,” Russell says on his site. “There cannot be one standard for Blacks and another for whites or Asians or Hispanics; there must be one for everybody. We have to stop allowing politicians and others to divide us by race (and gender, sexual orientation, etc.).”

“I want us to preserve what is unique about our city, including our canopy, which I am working really hard to preserve right now,” he said. “I am against the new changes in the zoning laws, because these zoning laws will be a great detriment to our green spaces and tree canopy.”

He hopes for an Atlanta that is a “better city, not just a bigger city.”

Whoever wins the race for council president will preside at city council meetings and serve as the tiebreaking vote, and the position is elected citywide. The election will occur this fall on November 2, and you can learn more about Russell’s campaign in the meantime at mikerussellatlanta.com.