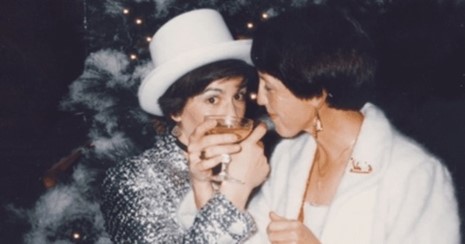 Out On Film Announces 2020 Jury and Audience Awards

Out On Film presented by WarnerMedia announced the filmmaker awards for the recently concluded 33rd edition of the Atlanta-based LGBTQIA+ film festival, its first as an Oscar ® qualifying film festival. Filippo Meneghetti’s TWO OF US was a two-time winner, taking the jury awards for both Best Narrative Feature and Best First Film. Posy Dixon’s KEYBOARD FANTASIES: THE BEVERLY GLENN COPELAND STORY won the jury prize for Best Documentary, and Rey Yeung’s TWILIGHT’S KISS (SUK SUK) was another big winner, winning both the jury prize and the audience award for Best International Film, as well as receiving the jury prize for Best Actor (Tai-Bo).

Regarding the double win by TWO OF US, KJ Mohr spoke for the jury, saying, “Riveting and gut-wrenching, TWO OF US stands out as a uniquely important lesbian love story and a sumptuous cinematic achievement. We were overwhelmingly impressed with the powerful storytelling, rich imagery and, above all, the claustrophobically engrossing atmosphere that director Filippo Meneghetti created.  This stunning accomplishment is all the more impressive, considering that TWO OF US is Meneghetti’s first feature film.”

Additional jury awards included; a Special Jury Award for Web Excellence, which went to “After Forever” Season 2 (Director: Tina Cesa Ward); and Best Drama Short Film, which went to Jamie Weston’s WINGS. Omar Zuniga Hidaldo won best Director for his work on LOS FUERTES, and Paul Riccio and Jamie Effros took the Best Screenplay honors for their GIVE OR TAKE script. The Best Actress award was shared by Robyn Lively (THROUGH THE GLASS DARKLY) and Alexandra Grey (GOSSAMER FOLDS). Bothe the film and the Out on Film screening were homecomings (one virtual, of course) for Lively, who was born in Powder Springs, Georgia, while Grey (known primarily for her role in Empire) scored in her first lead role in a feature film. Best Ensemble was also a tie between the casts of GIVE OR TAKE and MILKWATER.

Regarding this year’s largely virtual presentation, Out on Film Festival Director, Jim Farmer, said, “While we missed the live aspect of our festival this year and hosting filmmakers and patrons, the virtual component allowed us to reach an audience literally throughout the state of Georgia and in some cases throughout the country. It also gave us the opportunity to host three dozen conversations with filmmakers across the world. The virtual element will have to be a part of Out On Film moving forward.” He added, “Our live conversations with Margaret Cho and Kevin Williamson were thoroughly enjoyable and as popular as we expected them to be. Our 40th anniversary drive-in screening of FAME was also a wonderful highlight this year, including conversations with two of the iconic stars of that movie, Irene Cara and Paul McCrane.”

Sandwiched between the Opening Night presentation of Cindy Abel’s celebrated documentary SURVIVING THE SILENCE, and the Closing Night screening of Monica Zanetti’s prom comedy ELLIE AND ABBIE (& ELLIE’S DEAD AUNT), Out on Film, one of the longest running LGBTQIA+ film festivals in the world, spiced their lineup with attention-getting special anniversary screenings, including FAME, which was sponsored by Lexus, and Del Shores’ classic, SORDID LIVES.  the presentation of Out on Film’s Icon Award to Margaret Cho, and the “Conversation of Film” with SCREAM and Dawson’s Creek scribe Kevin Williamson. The jam packed lineup swelled even further with a special preview of the HBO documentary series Equal, and the addition of Lauren Fash’s made-in-Georgia psychological thriller, THROUGH THE GLASS DARKLY.

Farmer added, “Faced with the decision that many film festivals have faced since March, we not only did not cancel, didn’t postpone, or even scale back our programming and the number of days of Out on Film. We made a vow earlier this season when we got the news that we were an Oscar® qualifying film festival that we would go all out. We had 139 films and one drive-in screening. We held 35 Q&As from around the world, some pre-recorded, but most live. We are thrilled to have joined the ranks of so many other film festivals that have not just survived the challenges this year has presented, but grew, innovated, and strengthened our brand, and expanded our reach around the world. Most of all, we couldn’t be happier for our filmmakers and the new fans they gained via our screenings, and, of course, those that will now continue their film festival tours with new awards courtesy of Out on Film.”

TWO OF US (Director: Filippo Meneghetti)

TWO OF US (Director: Filippo Meneghetti)

Filippo Meneghetti (TWO OF US)

Paul Riccio and Jamie Effros (GIVE OR TAKE)

GIVE OR TAKE and MILKWATER

THE NAME OF THE SON (Director: Martina Matzkin)

For information on Out on Film, please visit outonfilm.org.