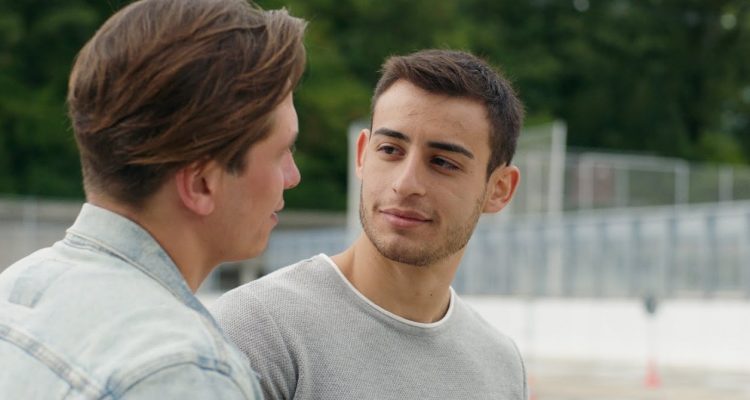 "Beyto" screens at the Plaza Theatre on Thursday, June 24

Out On Film Closes Out Pride Month with Two Film Screenings

First, catch “Beyto” on Thursday, June 24 at the Plaza Theatre Drive-in. The film follows a talented swimmer whose ideal world falls to pieces when he, the only son of a Turkish migrant family, falls in love with his coach. The screening, which begins at 9 p.m., is sponsored by the Consulate General of Switzerland in Atlanta, City of Atlanta LGBTQ Affairs, WUSSY MAG, and Out On Film. Buy tickets here.

Later, Out On Film is teaming up with the Atlanta Jewish Film Festival (AJFF) and SOJOURN for the Southeastern premiere of “Double Income, Kids.”

With adoption and surrogacy illegal for gay couples in Israel, Motty and Alon have been forced to look further afield in their quest to have a child. “Double Income, Kids” chronicles a year in their lives, from the relationship they form – through Skype – with their surrogate in the United States, to the challenges they face – not always spoken, but deeply felt – from their families, to the reality of being sleep-deprived, overwhelmed parents. A story that is both personal and universal, the film deals with discrimination and acceptance, and is, ultimately, a joyful celebration of love and family.

The film streams June 27 through 30 via AJFF Virtual Cinema. On June 30 at noon, audiences will have the opportunity to speak directly with the film’s director, Hendrik Schäfer, about the film. Participants of this virtual conversation will also be entered to win prizes provided by Out On Film and SOJOURN. Buy tickets here.

“I am happy that over the last year, Out On Film has been able to offer our audience all sorts of virtual entertainment,” said Out On Film festival director Jim Farmer, “and we are excited about getting back to in-person events as well.”

Along with these amazing selections, you can enjoy director and talent interviews on the Out On Film YouTube channel. New additions include Bill Condon, the director of “Dreamgirls” who won an Oscar® for his “Gods and Monsters” screenplay, “Girls Will Be Girls” director Richard Day and actor Jack Plotnick, Emmy Award winning actress Carrie Preston and iconic director Cheryl Dunye, known for “The Watermelon Woman.” Out On Film’s ‘In Conversation Zoom’ series can be found here.

This year’s Out On Film festival – scheduled for September 23 through October 3 — will be a hybrid event with both in-person events and virtual screenings. It will be Out On Film’s first in-person festival since becoming an Oscar® qualifying festival in early 2020. The full schedule will be announced in late August.