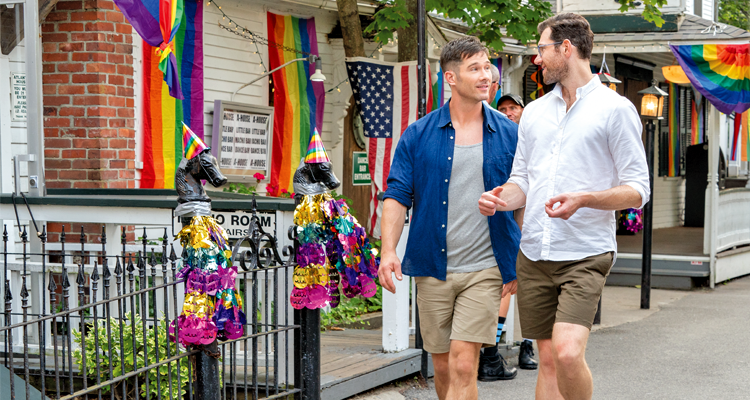 Out On Film Starts Strong on September 22

Out On Film, the renowned Oscar-qualifying LGBTQ film festival, makes its return to Atlanta for its 35th anniversary this fall, kicking off with its opening weekend on Thursday, September 22 at Landmark’s Midtown Art Cinema.

Opening the night is Bros at 7 p.m., a highly anticipated and gay as hell romantic comedy about how hard it is to find another tolerable human being to go through life with.

“Bros” opens the festival with a blockbuster bang. The film is backed by big names like Nicholas Stoller, Judd Apatow, and Joshua Church. It also features an entirely LGBTQ principal cast. Billy Eichner stars as Bobby Leiber and is also a co-writer alongside Stoller, cementing himself in history as the first openly gay man to co-write and star in his own major studio film. The film also includes the star power of Luke Macfarlane, TS Madison, Monica Raymund, Guillermo Diaz, Guy Branum, Amanda Bearse, and Bowen Yang.

“It’s about showing people, it’s great that a straight actor can win an Oscar for playing gay, but look how funny and hilarious and warm and delightful LGBTQ actors can be in a wide variety of roles that we don’t normally get to play,” Eichner said of the film’s inclusivity in an interview with Variety.

The film follows Bobby, a podcaster who loves his independence. That is, until he meets Aaron, his complete opposite. Whereas Bobby is dorky and cerebral, Aaron is, as Bobby puts it, “gay Tom Brady.” In classic rom-com fashion, Bobby struggles to learn how to love after being unattached for so long. “Bros” promises to be a strong start to this year’s Out On Film festival.

This film was a labor of love for writer, producer, and director Juan Jose Frausto. The film is six years in the making, funded and backed entirely by Frausto, who took a step in a different direction from his usual action, horror, and drama catalog.

“It was the most spiritual, the most emotional, the happiest time I ever had working on a movie,” he told Georgia Voice. “It was godsent, I felt like the angels were there protecting us to make this movie. There was some divine intervention that everybody felt, not only me. This movie had to be made.”

This love is clear when watching this film, a passionate and emotional story about the universality of love itself.

“Love Without Fear is a love story,” Frausto said. “It’s not a gay or straight movie, it’s about being human. Love comes in all shapes and sizes, and it’s about who makes you happy. If [you have someone who] makes you happy, you have it all. It’s a blessing, and that’s what the whole movie is about.”

Friday kicks off with two short film blocks: Everything Under the Rainbow Shorts at 3 p.m., featuring seven films, and Transexcellent, a collection of five films, at 5.

Following the shorts blocks is the Swedish film, So Damn Easy Going at 7. The film, one of my favorites not only of the festival but of the year so far, follows the romance between anxious, soft-spoken 18-year-old Joanna and charming and confident Audrey. Despite being complete opposites, they have a chemistry between them that is natural, endearing, and a joy to watch.

“The casting process [for the two female leads] was very important,” director and co-writer Chistoffer Sandler told Georgia Voice. “The script got a rewrite after we cast them. I took the time to rewrite some stuff that I knew would be more suitable for them after I got the chance to get to know them. I was trying to not make [the chemistry] feel forced … They played off each other really well, and they felt safe in each other’s company.”

While Joanna and Audrey are falling for each other, however, Joanna is struggling with her mental health. Her father, in a deep depression mourning the loss of her mother, has been struggling financially, which means Joanna can’t afford her ADHD medication. The film follows her hunt for money as she runs out of pills and becomes overwhelmed, not only with ADHD symptoms, but also with shame.

“For me personally, [mental health shame] is a relatable subject,” Sandler said. “I can’t speak for everybody, of course, but at that age I was very sensitive about how people perceive me and what kind of information I was willing to give people around me. I had this idea of building a facade; you want to be one of the popular ones, you don’t want people to know your weaknesses … The core subtext or message is about not trying to hide who you are, be proud of who you are and your faults, warts and all. It’s not an easy thing to do, especially when you’re young.”

The second day of the festival closes with Australian film Lonesome at 9. Expect lots of steamy sex scenes in this Western-inspired drama that follows country boy Casey as he ventures into the big city to avoid a small-town scandal. Through his forays into hookup apps in Sydney, he meets Tib. The film follows their sexual and emotional relationship, revealing both the intimacy and toxicity that can be shared while navigating sex, relationships, and masculinity.

“[Lonesome is] about contemporary sex in the gay male world and the way sex is used, sometimes transactionally, sometimes to relieve boredom, sometimes to manipulate,” writer, director, and producer Craig Boreham told Georgia Voice. “It interrogates that landscape and how our community connects these days, often through hookup apps. [It’s also about] the way gay men perform masculinity and the problems that arise because of that.”

The film explores the theme of familial disconnect, with both Casey and Tib experiencing issues with their parents. This conflict provides the emotional heart of the film, this pain manifesting in traditionally masculine invulnerability and aggression.

“Things are very different now in Sydney, where I live, but when we go out into the [Australian] regions and outer suburbs, it’s a different landscape,” Boreham said. “There are things that are still problematic for a lot of people. I’m interested in those characters, because we don’t see them as much in queer cinema.”

Out On Film runs through October 2 — you can find reviews of the remaining films in our next issue, out September 23. For the full schedule and tickets, visit outonfilm.org.