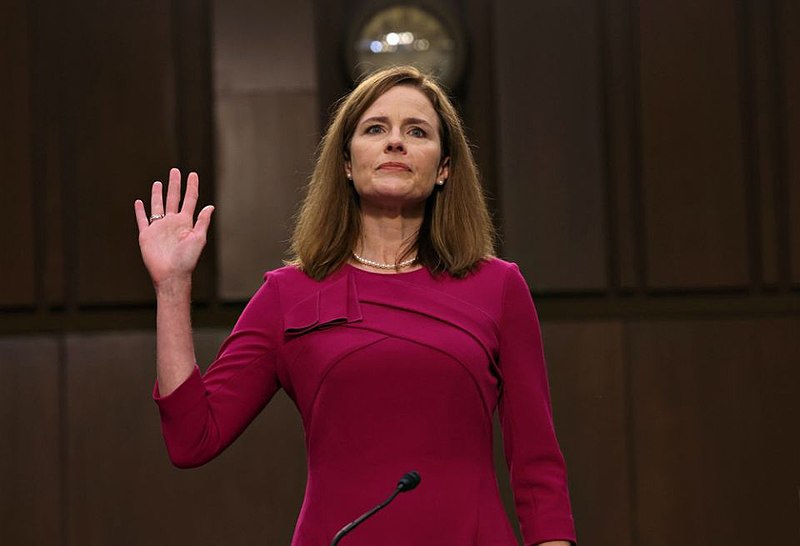 The U.S. Senate on Monday confirmed Amy Coney Barrett to a seat on the U.S. Supreme Court by a vote of 52-48, solidifying a 6-3 conservative majority on the bench and President Trump’s lasting impact on the judiciary.

Sen. Tammy Baldwin (D-Wis.), the first out lesbian elected to the Senate, joined other critics in saying Barrett’s confirmation was rushed through and said on the Senate floor “voters across America should be allowed to cast their ballots first,” but Republicans “have no interest in listening to the people.”

“That’s why they are rushing and ramming President Trump’s Supreme Court nomination forward just days before the election,” Baldwin said. “This rigged and illegitimate process is wrong, and it follows a pattern of the majority leader and Senate Republicans abusing their power to break their own standards on Supreme Court nominations.”

No Democrat voted in favor of confirming Barrett, whom President Trump selected to replace the late Ruth Bader Ginsburg on the Supreme Court. Sen. Susan Collins (R-Maine) was the only Republican to break with her caucus against confirming Barrett, which critics say was done in a rushed process.

Fears persist Barrett’s confirmation to the U.S. Supreme Court would be a threat to LGBTQ rights, including same-sex marriage. Bolstering that apprehension was an unexpected statement earlier this month from U.S. Associate Justices Clarence Thomas and Samuel Alito declaring war on the 2015 Obergefell decision granting marriage rights to same-sex couples.

Sarah Kate Ellis, president of the LGBTQ media watchdog GLAAD, said in a statement Monday prior to Barrett’s confirmation the appointment “is alarming for LGBTQ people and for all Americans whose fundamental rights should never be up for debate.”

”Barrett’s time at a school that discriminated against LGBTQ families and hurt LGBTQ youth is disturbing and should disqualify her from the Court. Her stated views against marriage equality, rulings against access to abortion, and her public criticism of the Affordable Care Act are out of step with fair-minded Americans and threaten the progress our country has made to become a stronger and more equitable home for all,” Ellis said. “Her record against LGBTQ families and rights has no place in American life, let alone the highest court in the land.”

Barrett, during her confirmation hearing last week before the Senate Judiciary Committee, said Obergefell “clearly says there is a constitutional right to same-sex marriage,” but wouldn’t budge from no comment on whether she’d vote to overturn the decision, most notably in an exchange with Sen. Richard Blumenthal (D-Conn.).

“[You’re] implying that I’m poised to say I want to cast a vote to overrule Obergefell, and I assure you, I don’t have any agenda, and I’m not even expressing a view of disagreement with Obergefell,” Barrett said. “You’re pushing me to try to violate the judicial canon of ethics and to offer advisory opinions, and I won’t do that.”

But Barrett has history of deep affiliation with Catholic Church, which has long record of opposing LGBTQ rights (despite Pope Francis I coming out in favor of civil unions just last week), and has articulated personal and religious opposition to same-sex marriage.

In 2015, Barrett signed with other Catholic women a letter to bishops affirming marriage is “founded on the indissoluble commitment of a man and a woman.”

Trinity Schools, the religiously affiliated private school where Barrett served as a trustee for three years, had a hostile climate for LGBTQ teachers and effectively barred students with same-sex parents from admission, as reported by the Associated Press.

Barrett has also admitted to taking speaker fees from a legal fellowship affiliated with Alliance Defense Freedom, a group that fought against same-sex marriage and other LGBTQ rights across the board. Barrett downplayed that connection during her confirmation hearing and during her 2017 confirmation hearing for her on the Seventh Circuit gave a total of three explanations for when she became aware of the legal group’s anti-LGBTQ work.

David Cicilline, the most senior openly gay member of the U.S. House, said in a statement prior to Barrett’s confirmation the Senate should have waited until after Election Day when a new president to sworn-in to fill the open seat on the Supreme Court.

“The American people should have a say in who gets a lifetime appointment to the Supreme Court,” Cicilline said. “Instead, just eight days before a presidential election, Republicans will vote today to confirm Judge Amy Coney Barrett, a nominee who threatens the progress our country has made over the years to expand access to health care, protect the LGBTQ+ community from discrimination, address the threat of climate change, and guarantee that women can make their own health care decisions.”

The most imminent opportunity for Barrett to adjudicate a case related to LGBTQ rights is the issue of foster care. Catholic Social Services, in the case of Fulton v. City of Philadelphia, is arguing a First Amendment right to refuse to place children with same-sex couples — even though it had signed a contract with Philadelphia agreeing not to engage in anti-LGBTQ discrimination through its taxpayer-funded activities. The case is set for oral arguments on Nov. 4, the day after Election Day.