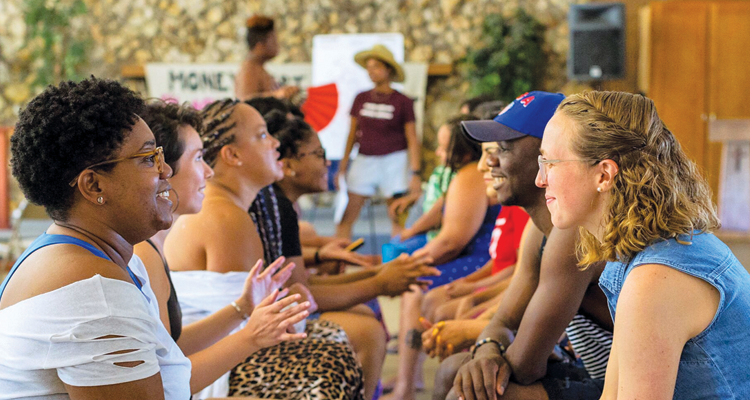 So You Want to Be a Better White Ally

As protests have erupted across the nation against police brutality, many white people are coming to the sobering realization that simply not being racist is not enough. In a world ruled by white supremacy, we as white people are having to reevaluate: How can we help after centuries of hurting? It’s a task as daunting as it is necessary, but organizations like Southerners on New Ground (SONG) are tackling it. Jade Brooks, the Regional Organizing Lead for SONG, talked to Georgia Voice about the work they’re doing to mobilize white members and the ways white people can become better, more effective allies to the movement for black lives.

Over the course of this summer, SONG will host a “Race Traitors” series, the goal of which is to bring Southern, antiracist white members together to build connection and relationship while focusing skills and strategy to follow the leadership of black people. “We see this Race Traitor series as just a flanking to the black-led work that SONG is moving, particularly in collaboration with the movement for black lives,” Brooks said. “We want to give people real, tangible actions to take during this time; sometimes, as whites, we really spin out.” One of the central tenets of the series and of SONG overall is maintaining accountability, something that Brooks says is necessary to practicing antiracism. “We know that combating internalized white supremacy and the sickness of racism inside ourselves as white people is a lifelong journey,” she said. “So, we hold on to this notion of getting yourself an “accountabili-buddy:” somebody who’s going to hold you accountable to the ways you’re trying to grow in your antiracist organizing so it’s not always on black people and people of color to call us out or give us feedback.”

Accountability means recognizing and challenging your own white supremacy, which often manifests in ways that can be unintentionally insidious. In 2015, SONG released a guide regarding the role of white people in the antiracism movement. The guide discusses racist tendencies that can prevent or inhibit organizing, which include (but are not limited to): martyrdom, condescension, gatekeeping, tokenism, entitlement, fragility, and self-obsession.

This internal allyship is best matched with external action, which is where many white allies can become overwhelmed. According to Brooks, the best way for newbie organizers to get involved is to simply lend your labor to black-led organizations, even just to mop floors. “Too often we think, ‘Okay, the first step is to read every book that’s been written or listen to every podcast that’s ever been recorded.’ That’s always important to strengthen our analysis, but we also believe in practice. We’re not trying to reinvent the wheel. The call is very clear right now: defund the police. Look for organizations in your community working to defund the police and see how you can support.” While SONG is a great organization to support, Brooks also suggests Close the Jail ATL, Women on the Rise, and Just Georgia as activism launch pads.

Allyship is no easy feat: to be effective, it’s going to be risky. “We need to be feeling the discomfort and tummy clench of moving outside of our comfort zones in our vocal resistance to racism in every community conversation we’re in,” Brooks said. “If we’re not feeling that discomfort, then we’re not doing enough … I wish we were seeing more white people taking risks right now: putting our bodies on the line in the streets (for those of us who are able, obviously) and having difficult and necessary conversations with our kin—both our right-wing kin and our Amy Cooper-style liberal white lady kin who think they’re doing everything right.”

These kinds of awkward, difficult conversations with family are what will make the difference come November. “[We] … need to go get our families and move them to vote,” Brooks said. “We’re facing an election that has tremendous impact across so many of our communities, particularly black, undocumented, and poor people. We need to be having the conversations necessary to move more white people to be pro-racial justice than we’ve seen in the last … well, ever!”

If we’re going to see the real, systematic change necessary to protect the lives of black people and other marginalized groups, we as white people need to take on some of the responsibility; it should not be on only black people to care about black lives. While we must self-critique, follow the clear direction of black community leaders, and, as Brooks says, “never think that any of us have got it figured it out,” we have the power to organize our fellow white people toward the goal of social, racial justice.

To get involved with and learn more about SONG, visit southernersonnewground.org.