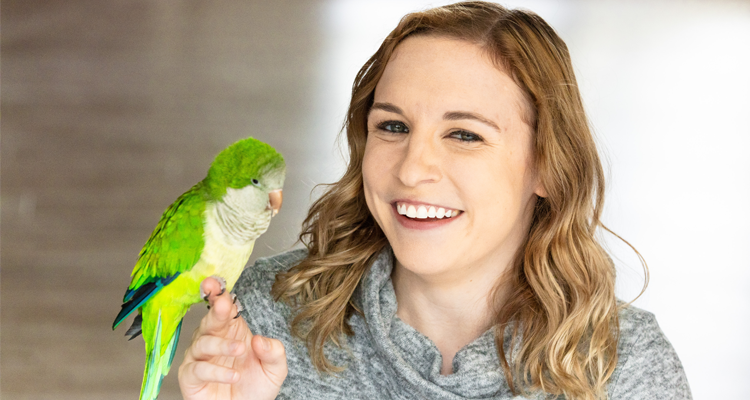 Perry got Sprite when she moved out of her parents’ house and learned how lonely it could be living on her own. It was love at first … poop.

“When I got to the store, they brought him out, and he pooped on me like six times, and I was like, ‘Yep, he’s the one,’” Perry told Georgia Voice. “He was really shy when I first got him, and then after a week he got really comfortable.” 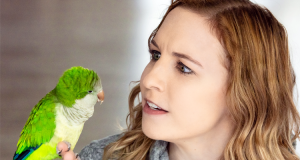 Now, Sprite is anything but shy. With the help of Perry’s training, Sprite has become a talented communicator, garnering him and Perry quite the social media following. Over 250,000 people follow Perry and Sprite on TikTok, where the duo make comedy sketches together. Perry has made comedy videos on social media for years, and when she began getting to know Sprite, she realized he was a comedic gold mine.

“Making videos has always been my creative outlet,” she said. “One day, Sprite got his hands on a soda can that somehow fell out of the trash can. He was circling it and playing with it, and I’d never seen him that happy before … That’s when I came up with the comedy series of a drunk bird with an irritated lesbian mother. I thought that was the weirdest comedy duo, so I started writing out the scripts of Sprite and I and [sharing the videos] on Instagram and Facebook. Pretty much every single person I’d ever met in my life started watching them and thought they were hilarious. It wasn’t until 2020 that I downloaded TikTok, and I started putting them on there. That’s when we got such a huge audience.” 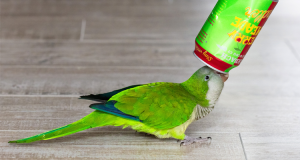 Perry has trained Sprite to say hundreds of words, which she bases their sketches around. His vocabulary includes “bitch,” “titties,” and “shut up,” as well as a very sinister evil laugh. He’s not always crude, though. He also says, “Kristen,” “you’re so cute,” “bless you” when she sneezes, and “I love you.”

“I trained him to do everything you see on TikTok,” she said. “Originally, I was just doing it for myself, because I thought it was hilarious for him to cuss me out. Unlike other bird trainers, I train him to do the words when he feels it, not because he’s doing it for treats or a whistle. For example, he calls me ‘bitch’ or tells me to shut up, but he only does it when he’s mad. Or when I come home from work, he’ll say, ‘Hi! I missed you! I love you! Kisses!’ He knows that’s associated with happy.”

She trains him by doing the action that spurred his emotional response, like touching his beer can (which he’s very protective of) to make him mad, and then repeating the word she wants him to use, like “bitch.”

Perry also makes social media content not involving Sprite, which includes sketches about her imagined “Generation Alpha,” the generation after Generation Z, as well as videos about being a lesbian.

“I’ve always wanted to do lesbian content, but I’ve always been too scared because most of my family is very Republican,” she said. “Most of them were completely against [gay marriage]. Over the years, they’ve all changed their minds. But I got to the point where I was on TikTok and saw so many open lesbians, and I was single so I thought, ‘Oh cool, it would be great to meet somebody.’ So, I made the conscious decision to come out on social media because I thought it would be a great way to meet people and meet friends, which I have.”

Perry’s videos have garnered literally millions of likes — almost 10 million, to be exact. After two years of being on TikTok, though, she’s learned to care less about the likes and more about the fun.

“In reality, [making TikToks is] really hard because of the time [commitment],” she said. “It’s supposed to be a fun outlet for you, but when the views started getting really high, I started having less fun with it. I was too worried about the traffic and getting views. I stopped doing that and started going back to just do it for fun. That’s when the views started going back up, because people aren’t stupid; they know when you’re just doing things for views.”