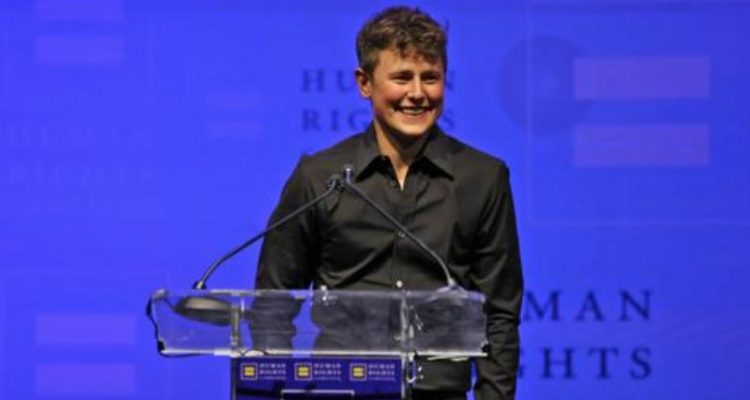 Roy P. Disney, Charlee’s father and the grandson of the company’s co-founder, revealed the news in a recent statement announcing the family would double its initial promise and match up to $500,000 in donations to the Human Rights Campaign (HRC), the nation’s largest LGBTQ+ rights organization. Last month, Charlee Disney said the family would match up to $250,000 at the organization’s annual gala in Los Angeles.

“Equality matters deeply to us,” Roy P. Disney said in a statement, according to the LA Times. “Especially because our child, Charlee, is transgender and a proud member of the LGBTQ+ community.”

The HRC gala was sort of a public coming out for them, Charlee Disney told Times columnist Robin Abcarian, given that they came out privately four years ago.

“I have a trans kid, and I love my kid no matter what,” Disney’s mother, Sheri, told the newspaper.

Disney CEO Bob Chapek came under fire for his response to the bill, which many viewed as muted. After widespread criticism for declining to speak out against the legislation, Chapek ultimately apologized, publicly opposed the measure, paused all political donations in Florida and urged Republican Gov. Ron DeSantis to reject the bill in a phone call.

After DeSantis’ signature, the company also released a statement, saying the bill “should never have been signed into law.” The governor later said the company “crossed the line,” adding that Disney has “alienated a lot of people now,” at a press conference in West Palm Beach.

Charlee Disney, 30, a high school biology and environmental science teacher, had a difficult journey, even with “all the apparent privilege in the world,” Abcarian wrote.

“I had very few openly gay role models,” they said. “And I certainly didn’t have any trans or nonbinary role models. I didn’t see myself reflected in anyone, and that made me feel like there was something wrong with me.”

Disney, who admitted that they had little experience with public speaking or advocacy, expressed regret for not doing more to support the LGBTQ+ community.

“I feel like I don’t do very much to help,” Charlee Disney told the Times. “I don’t call senators or take action. I felt like I could be doing more.”

They also widely condemned anti-LGBTQ+ legislation in the U.S. So far this year, state lawmakers have proposed over 240 anti-LGBTQ+ bills – many of which target Trans youth – according to Freedom for All Americans’ legislative tracker.

Disney said that LGBTQ+ youth already face high rates of depression and anxiety, not to mention bullying and suicide. “Then to put something like this law on top of that? They can’t learn about their community and their history at school, or play sports or use the bathroom they want to use?”