Inside Georgia’s (and America’s) Gayby Boom 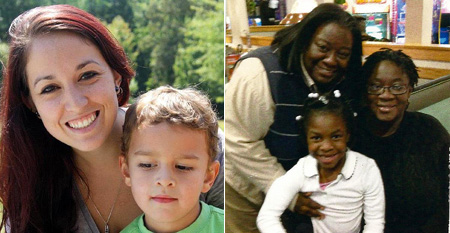 The bemoaned go-go boy dancing on a float may soon have to surrender his status as the cultural symbol of Gay Pride festivals — to baby strollers.

“It’s wild and phenomenal, especially that this is happening in Atlanta,” she said.

The proliferation of LGBT individuals and couples raising children mirrors what Panacci has seen in her 14 years as reproductive services manager at the Feminist Women’s Health Center, where lesbians make up about 90 percent of clients in the donor insemination program.

“[In 1998], we would have four or five insemination procedures a month, that would be kind of busy,” Panacci said. “Over the years, we’ve probably been serving, on average, about 20 patients a month, which is what we used to serve annually.”

Considered an anomaly a decade ago, gay and lesbian parents have woven themselves into the fabric of both gay and American culture: ubiquitous at events like Pride, and requisite for any prime time sitcom.

But the film and television caricatures of gay parents  — most obviously the middle-aged, high-income white male couple as seen on shows like “Modern Family” and “The New Normal” — distort the demographics of the so-called “gayby boom” that has taken place during the early part of this millennium.

LGBT parenthood encompasses single mothers and transgender fathers. Census data shows that more than a quarter of same-sex couples in the South are raising a child, outpacing every other region. Black and Latino LGBT people who are in a relationship are both more likely to be parents than coupled whites.

As America’s LGBT family portrait evolves, what it means to be an LGBT parent in Atlanta does too.

Parenting out of the closet

Ebonee Woodruff-Barnes knows first-hand how much has changed for LGBT parents in the last two decades. The biological mother of two sons born in the late 1980s, Woodruff-Barnes is parenting a young one once again, having raised her seven-year-old great-niece since birth.

“At the time I was raising the older ones, I was more closeted than I am now,” Woodruff-Barnes said. “It was definitely the era. I pretty much couldn’t be who I was when it came to being a parent, I think because I had to be a parent and not be myself.

“Out in the open, I couldn’t be a lesbian mother,” she said. “Now, I can be who I am, I can classify myself as a lesbian parent and there won’t be any repercussions for that.”

The Feminist Women’s Health Center has always tracked the “outness” of the clients in its donor insemination program, and the openness with which gay parents are living their lives has “radically changed,” Panacci said.

“Almost all couples applying to come in now specify that they’ve already built their village,” Panacci said. “I can’t even remember the last time I met with a woman or couple who self-identify as LGBT and didn’t say that they were out to their families, or even out at work. The ‘outness’ and how that’s shifted in the past decade has been tremendous.”

Woodruff-Barnes recalls receiving some awkward glances and greetings when her child attended school in more rural Douglas County, but she and her partner were voted Parents of the Year twice since moving to DeKalb County.

Woodruff-Barnes considers herself part of the enduring legacy of black LGBT people stepping in to raise the child of a family member.

“It’s very common,” she said. “I’d say about 75 percent of my friends who do not have their own biological kids are raising one of their family members.”

From 1990 to 2006, the percentage of same-sex couples raising children increased by about 50 percent, according to research by Gary Gates, the Williams Distinguished Scholar at the UCLA School of Law’s Williams Institute, who studies the demographics of LGBT people in the United States using data from the U.S. Census and other government studies.

In 1990, 12 percent of same-sex couples were raising children; in 2006, the percent was up to nearly 19 percent, Gates noted in a report last year. The figure has since dropped to about 16 percent.

“This pattern seems to contradict the prevailing view that increasing numbers of lesbians and gay men (and same-sex couples) are raising children,” Gates noted.

“However, a closer look at these data suggests that there may be two different trends occurring with regard to parenting.”

At the same time, “declines in social stigma toward LGB people mean that more are coming out earlier in life and are becoming less likely to have children with different-sex partners,” Gates observed.

Kristen Skillin came out to her parents at age 14 in 2005, but briefly experimented with a guy two years later and became pregnant. Since her son was four months old, Skillin has been raising him as a single lesbian mom, and believes her experience has been similar to her heterosexual counterparts.

“Being a single mom dating is a lot harder because you have to pace it,” Skillin said. “Is this going to be a serious relationship? Are they going to meet your kid? Should you bring them over?

“My son is five now, and definitely he’s going to remember people, and I can’t bring people into his life if I’m just dating them,” she said.

At 21, Skillin embodies the openness that successive generations of LGBT parents can enjoy. It wasn’t until a year after Skillin came out as lesbian that her father acknowledged to the family that he was gay.  Skillin’s own son, Wesley, once asked her when she was going to get married, and Skillin told him she has to find the right girl.

Skillin remembers a middle-school classmate who used to be teased because she had two mothers, but said, “I think we’ve made great movements toward equality and people becoming more and more accepting.

“Living in the Bible Belt, you wouldn’t expect too many people to be accepting, but I’ve been seeing it at my son’s daycare, and his friend’s parents,” said Skillin, who lives in Buford. “It’s been a lot easier than I would have expected it to be.”

While attitudes toward LGBT parenting have evolved alongside the discussion of same-sex marriage, Gates points out that laws have not kept pace to ensure that LGBT parents are protected — especially in the South, which cites a higher percentage of same-sex couples raising children than other regions.

“The geographic data suggest that many same-sex couples raising children live in states with legal environments that at best are not supportive and at worst are openly hostile toward LGB individuals and their families,” he noted.

Gay couples are banned from marrying in Georgia. State law is silent on the topic of adoptions by gay parents, leaving decisions in the hands of individual judges.

Another force that doesn’t seem to be keeping pace with societal changes is the market. Whereas insemination and surrogacy options have gone from niche to almost mainstream, the price of assisted fertilization has expanded as well.

“This service costs money,” conceded Panacci of the Feminist Women’s Health Center. “We’ve tried very hard as a non-profit organization to keep our costs to where it’s accessible to as many people as possible.”

The rising cost of health care and prescription drugs, as well as an almost tripling of sperm bank prices over the past 15 years, makes donor insemination too costly for some.

“We had a few friends who had gone before us, so we knew the costs were really expensive,” said Jamie Fergerson, who is the parent of a 7-month-old son along with her husband, Max, who is transgender.

“And so we had been saving money for a couple of years before we started trying to get pregnant,” Fergerson said. “The cost is certainly prohibitive for some people, and a stretch for a lot of people.”

William Kinnane and John Petersen, a gay couple in Sandy Springs, spent more than $35,000 over four years trying to adopt a child. They now have a three-year-old daughter, Riley, and are thinking about expanding their family.

“We might do surrogacy or through foster care,” said Kinnane, who added that they are also considering an international adoption.

Despite the gayby boom that is seen in public and popular media, the majority of LGBT individuals and couples remain childless, according to Gates’ research.

Petersen and Kinnane were among the LGBT parents attending the 4th annual MEGA Family Conference hosted by the MEGA Family Project Nov. 3, and Kinnane said the organization helps connect them with other families.

Ferguson believes parenthood can be particularly isolating for LGBT and queer couples whose peers are childless, and considers her young family fortunate to have a broad support group.

“Most of our friends don’t have kids, but we’re lucky that we’ve built a friend community that loves children, and they love our child,” Fergerson said. “We’re also lucky that our families of origin are pretty supportive now. I wouldn’t say that it’s always been that way or that it was easy for them to come to the place where they’re happy and supportive, but everyone loves a grandchild.”

Top photo: Kristen Skillen (left) says she has not experienced discrimination as a single lesbian mom raising her young son. Ebonee Woodruff-Barnes (right with partner Tonie Tobias) raised her two sons in the 1980s, and says she is much more out as a parent now that she is raising her great-niece, Nykisha. (Courtesy photos)