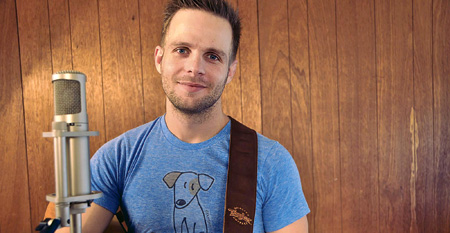 Years ago, Tom Goss planned to be a Catholic seminarian. Now he’s headed to Atlanta to help raise funds for a bunch of fake nuns.

An acoustic singer-songwriter known for both his music and his messages, Goss performs at Atlanta’s First Existentialist Congregation on Saturday, March 9, to benefit the Sisters of Perpetual Indulgence, the group of drag nuns dedicated to community service for LGBT people and beyond.

“I’ve met Sisters all over the country; I love their energy and their works,” Goss tells GA Voice.

And while Goss will join the Atlanta Sisters as performer rather than priest, he still packs powerful meanings into his music.

The video for his song “Lover,” which garnered more than 81,000 YouTube views, told the story of the partner of a gay servicemember killed in action and featured three actual members of the military who were discharged under “Don’t Ask, Don’t Tell.”

GA Voice caught up with Goss the day before his newest video, a multi-layered acoustic cover of “Can’t Hold Us” by Macklemore and Ryan Lewis, debuted on Feb. 26.

GA Voice: You dropped out of Catholic seminary. Did coming out play a role?

Tom Goss: Not really. I didn’t leave because I felt alienated by my sexual identity. When I came to the self-realization that I was gay that didn’t change my ideas about my belief that God was all knowing, all powerful and all good.

For me, if God is in fact those three things then my sexuality was something that God created in me and was also something that was good. As someone who had spent my life feeling asexual it was a positive revelation for me.

Being attracted to another person opened my own understanding of my ability to love on a deeper level. I see nothing but good in that. In many ways, that realization brought me closer to God.

Do you still consider yourself Catholic? What do you think about the Pope’s resignation?

No. I don’t think much about it. I think it’s a very corrupt institution and they’ll put another person in his place to continue their tradition and agenda. When I entered seminary I believed the institution had huge flaws; I believed it was hurting people and alienating people. However, I also love it. As a result, I believed the only way to help create positive change was from within.

At this point in my life, I believe everyone should stop going to Catholic Church and giving them their money. It seems to me that the Catholic Church will only change when it is forced to.

Is being a singer-songwriter in some ways similar to being a priest? You are still spreading a message.

I entered seminary because I wanted to work in ecumenism, reconciliation and inter-religious dialogue. Folks always say to me, “Man, I wish I would have met you when you were training to become a priest. I bet you were so different.”

The truth is, as you have alluded to, I’m still doing much of the same things. However, now I have a different platform. My goal is still to reconcile people with themselves and one another, to speak about hope and love, and to help make the world a better place.

What inspired your latest CD, “Turn it Around”?

Well lots of things. I don’t really set out to write concept albums, mostly I write songs. Eventually a collection starts to take shape. Some songs get dropped because they don’t fit; some seem to fit nicely.

As the album was taking shape it became obvious to me that “Turn It Around” was primarily a song about seeing things in a positive light. It’s a record about growth, overcoming obstacles and of course, finding and nourishing love.

What is your favorite part of the musical process — writing, recording, or performing?

I prefer writing and performing to being in the studio. I do love it all though. I suppose if pressed I would have to say performing. That’s when I really get to tell stories and connect with people on a deeper level.

Recording and writing are very personal, solitary even. Performing is intimate as well; however, it’s a practice in being intimate, honest and open to a room full of people. That inevitably sparks conversation, you begin to hear people’s stories, their hopes and fears, connecting with them on a whole new level. That’s what I love.

I do this because I love telling stories and hearing others’ stories. To me, that’s the real power in music.

You have said that some of your songs are inspired by your husband. Do you think that music can help aid in the fight for marriage equality?

Without a doubt. Music is always a catalyst for change. I’d like to think that the videos for “Till The End,” “Lover,” and “You Don’t Question Love” made their own impact.

Now you see marriage equality videos being produced by mainstream artists, just look at Macklemore’s “Same Love.” The more we see and hear images of the normalcy of gay marriage, the more normal it will seem in the mainstream.

You headlined Augusta Pride here in Georgia last summer. How did the festival compare to others you have played?

I love Augusta. I always have a lot of fun there. I’ve been playing there for years. I am always inspired by Prides in smaller cities — there is a real sense of community, politics and common good that is admirable. …

Sometimes we take for granted that, in a big metropolitan city, we can go on a date, hold our partner’s hands and be openly affectionate. That is usually not the case in these smaller cities. As a result, there is a real courage that’s involved in hosting and running a Gay Pride festival.

What can fans expect from your Atlanta show? It benefits the Atlanta Sisters for Perpetual Indulgence —how did you get involved with them?

I met Gary Sisney [owner of Atlanta gay sports bar Woofs] when I was playing at The River’s Edge in 2010. He was very gracious and has helped introduce me to several people in the Atlanta area. Eventually he passed my name along to B’Yonda Cloud as someone who would be a good person to help entertain folks at a fundraiser.

I’ve met Sisters all over the country; I love their energy and their works. Still, I never performed at one of their official functions. I’m very excited to be doing so. Hopefully we can raise a lot of money. Bring your wallets…

If people leave a Tom Goss concert saying only one word, what would you hope for it to be?

I hate this question. I never know how to answer it without sounding completely egocentric. OK, let me think… The words that I hope people come out thinking are inspirational, moving, touching, vibrant, powerful, energetic, or even awesomesauce.

Top photo: Tom Goss dropped out of Catholic seminary, but uses his music to spread a message of hope, love and social justice — plus just plain good songs. (by Michael Patrick Key)