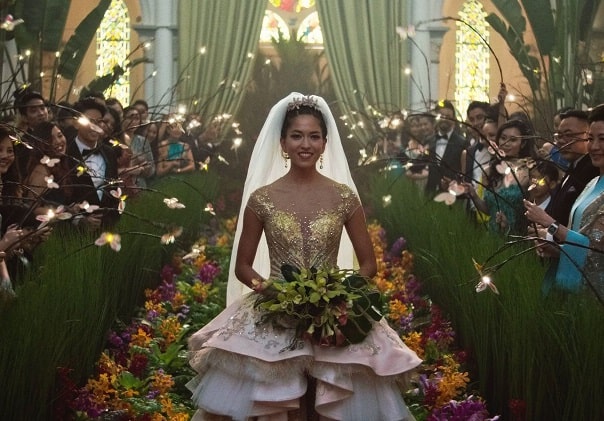 New Malaysian comedy-drama like a “Downton Abbey” set in Asia

Jim Farmer
Uncategorized
August 2, 2018
When out actor Nico Santos — best known for his work on TV’s “Superstore” — finally got around to reading Kevin Kwan’s wildly successful 2013 novel “Crazy Rich Asians,” he knew he had to play the role of Oliver T’sien in the movie. He’s part of a rich ensemble in the new film version.
Nico’s friend was meeting with the director about possibly being in the movie, and called to tell him about Oliver. Nico wasn’t familiar with the book but when he discovered the character, he knew it would be perfect casting. “It said he was in his 30s, wears glasses, is gay, and loves fashion. I said, ‘I need to play this part,’” says the actor. “I devoured the book and called my agent and told him he had to get me in for it.” Eventually, he got an audition and soon after got the role. Once he got the news, he was on a plane headed to Malaysia for a six-week shoot.
“Crazy Rich Asians” is a comedy-drama about an Asian-American woman (Constance Wu) who meets her boyfriend Nick’s parents only to find that they’re one of the richest families in Singapore — and they are not keen of their son dating her. Nico’s Oliver is Nick’s second cousin who works for an auction house in London.
Nico calls Oliver an outsider in his own family. “He is not as rich as other members of the family but he is trying to be in good graces with this group,” he says. “He does a lot of their bidding. He’s an errand boy who takes care of a lot of stuff for them. Whatever the family needs, he helps them out. As someone who is a person of color and is queer who knows what being the outsider is like, that is who Oliver is.”
Some of the information about Oliver was included in the book but not in the film, but for the most part everything was there — including what Nico deems “the juicy stuff.” The book has spawned two sequels. Though nothing was said about the sequels when filming, the actor admitted he would certainly be game for them, fully aware of the book’s reach and appeal.
“I think it’s kind of why ‘Downton Abbey’ was so appealing to people. It’s a peek into the lives of these people that are so mysterious to the outside world. Stories of wealth and excess and glamor have always been popular, but this is set in the background of Asia and a lot of people just don’t know much about it. And there are so many universal themes in the book. I think that’s what’s resonating. It’s really about finding love and acceptance and not feeling like an outsider. It’s not just an Asian story for an Asian audience.”
Born in the Philippines, Nico moved to the US with his family when he was 16. He studied acting at Southern Oregon University and eventually moved into stand-up (including gigs on “Chelsea Lately”) and acting in Los Angeles. He is about to return for his fourth season on “Superstore.” It’s been a great experience for him. “I always thought I’d be playing small roles, and to be given this platform is incredible,” he says. “I get to play an openly queer Filipino immigrant character and you never see that on television.”
Details
“Crazy Rich Asians”
Opens August 15
Metro Atlanta theaters