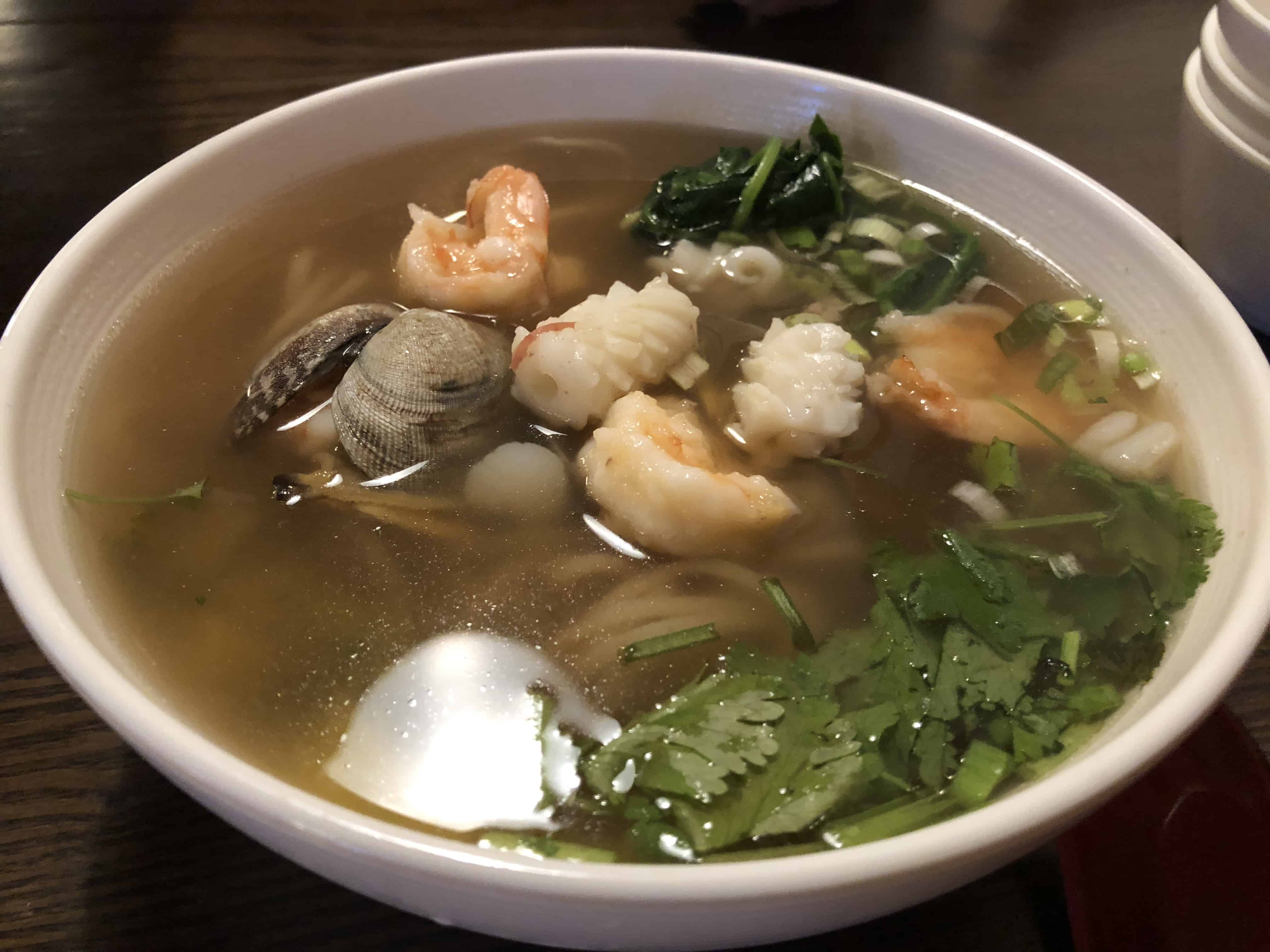 Noodles Longer Than Your Arms

Cliff Bostock
Uncategorized
August 30, 2018
Freshman year in any dormitory is always an adventure. Within 24 hours after my father dumped me at William and Mary, I smoked my first cigarette, drank my first beer, and took my first hit of hashish from a bong. After a few days, a Japanese guy with whom I smoked the hash stopped by my room and asked me to boil some water on my (contraband) hot plate. He dumped some dried-up noodles — ramen — into the water. They tasted great while listening to The Doors and smoking hash. When we tried them again a few weeks later without any dope, they tasted like shit. I literally have never touched packaged ramen while drug-free since then.
In recent years, freshly made ramen has become a really big deal. I think it’s partly because the soupy noodles fuse nostalgia for our youthful midnight munching with our grown-up taste for authentic Asian cooking. A great place to indulge that is Lan Zhou Ramen in PineTree Plaza. It’s easy to get confused by the place. Ramen is a Japanese favorite, but Lan Zhou takes its name from a city in China where the dish was allegedly invented. True or not, this new restaurant features noodles different from the super-skinny ones we usually associate with Japanese ramen.
At Lan Zhou, the go-to noodles are the “hand-pulled” ones. They’re literally arm-length noodles that the owner weaves with his magical fingers out of lumps of dough. They’re silky and mouth melting. The noodles are available in bowls of broth or stir-fried with countless available toppings. The menu includes many other dishes, from dumplings to fried rice.
Two friends and I sampled the menu broadly, ordering only one bowl of noodles with shrimp, squid, and scallops. Yes, one bowl is plenty for three when you’re ordering anything else on the menu. Our server brought it to the table with scissors. We must have looked confused. He explained that the noodles are very long and we’d need to cut them as we lifted them to transfer to smaller bowls. I said, “Maybe you could show us how to do that?” He ended up doing all the work for us. I have to say that while the noodles and broth were amazing, the seafood itself was unimpressive. I suggest you order one of the menu’s beef bowls, allegedly the favorite in countless noodle shops back home in China. But you have lots of other options that feature pork, chicken, and lamb. A few offal cuts, like tripe, are available too.
Nearly everything else we ordered was shockingly good. Maybe the best substantial dish on the table, after the noodles, was the “Chinese style spicy chicken” which is buried in a section of the menu entitled “Award Snacks.” Award-winning indeed: glossy-red chunks of fried chicken, chilies, and sesame seeds. I love Asian pancakes speckled with chives and Lan Zhou’s are the best I’ve ordered in a long time, principally because they were obviously just made, crisp, and steaming. Soup buns were delicate and flavorful, but not really filled with much liquid, at least not compared to Chef Liu’s. Their fried pot-stickers were flat-out amazing; I’ve never seen any like Lan Zhou’s. The eight beauties were served under something like a super-thin crepe, adding an extra mouth-melting crunch on top of the meaty dumplings.
This is going to be my new go-to for noodles. It’s clear everyone eating there loves the place. (I have no boundaries in restaurants and often ask people what they are eating and what they like most.) Go.