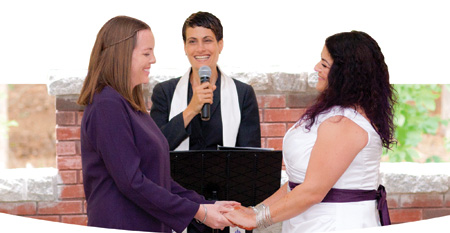 December 11, 2010, was the first day of forever for Anneliese Singh and Lauren Lukkarila.

They met for the first time at a restaurant in Atlanta. As they sat down together, Lukkarila began by saying, “I’m looking for someone who is a feminist out-of-the-box.” Singh high-fived her and exclaimed, “I’m your woman.”

“This was the first of many dinners so long we shut restaurants down, laughed ‘til our bellies hurt, cried sharing our most tender spaces, and kept falling deeper and deeper in love,” they shared on their wedding website.

The natural beauty of Mother Earth provided the perfect setting for Singh and Lukkarila to exchange vows. They wed on May 12, 2012, at Avondale Community Club, a lakeside venue that looks out into the nearby woodlands only a few blocks away from their home.

To steer clear of the gender binary of “bride and groom” or “bride and bride,” Singh and Lukkarila opted to call themselves the “Beloveds.” The romantic term was used throughout the ceremony, as well as when they were introduced at the reception.

Loved ones surrounded the couple as they exchanged deeply heartfelt and personal vows on the site’s patio.

“We chose to say and do things that reflected our deepest love and gratitude for both each other and our beloved community,” says Lukkarila.

Their ceremony was infused with spirituality from Sikhism, Native American traditions and Buddhism. Tables were topped with floral arrangements, a cylinder of sand from the beach where they got engaged and garden stakes of meaningful words.

Outside, lawn games kept the kids entertained while the adults indulged in passed hors d’oeuvres during a cocktail hour and a buffet-style dinner made up of a traditional Indian menu of delicious vegetarian, fish and vegan plates.

Because of Singh’s South Asian American background, they enlisted a Punjabi D.J. and swayed to Train’s “Marry Me” for their first dance.

To honor Singh’s father, who was from Punjab in India, they entertained guests with a local bhangra dance troupe. Bhangra is a centuries-old folk dance from northern India that farmers still perform to celebrate the harvest, and is a wedding tradition at Indian nuptials around the world.

“We had initially just aimed to have a ceremony and event that reflects our love, authenticity and magic we share. What we experienced was that, plus all of the love, support, encouragement and faith of our beloved community,” says Lukkarila.

Now about to celebrate their first anniversary, Singh and Lukkarila have a few hints for those planning their own wedding. First, forget social norms.

“Just make sure your decisions are guided by all the amazing feelings, love, and respect you have for one another. Then, all your decisions will have more of an ease to them — and most importantly lead to a more meaningful experience for you both!” Singh says.

Both also said getting married changed their relationship for the better.

“Our marriage deepened our commitment and bond to one another — and gave us a sense of home, peace and belonging that we did not expect,” Lukkarila says.

“We talked at length about this decision in advance and really thought it would just be about connecting with our beloved community. It was actually much more of a personally sacred experience than that,” Singh says. 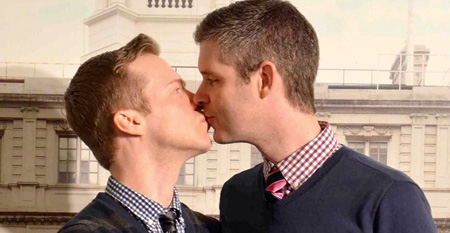 The pair decided to meet for a glass of wine about 9 p.m., after Guterman finished performing in an off-Broadway play. They sat at the bar and talked. And talked and talked.

“The date just kept going,” Gough says of that day, Feb. 21, 2008. The two finally decided to head home about 2:30 a.m. They shared their first kiss as snow began to fall over the city.

“It was very romantic,” Guterman says.

The two met on Match.com and learned they had much in common. Both are Southern — Guterman is from Iron City, Ga., a very small city in South Georgia, and Gough hails from Rustburg, Va. Although they grew up in rural towns, their families were socially progressive and are supportive of who they are. The two even grew up on roads named for their grandfathers.

“Our upbringings were so similar. I had not met like anyone like that in New York,” Gough says.

Guterman describes the night as magical and says he knew at that first date he was in love.

“I had been looking for him for a long time,” he says.

The two moved in together after six months before moving back to Atlanta, where Gough works in international finance and Guterman can be seen acting in many local plays, including “Wolves” at Actor’s Express.

The two talked about marriage early in their relationship and Guterman says he kept dropping hints for more than four years. Gough asked him why he didn’t propose. Guterman replied that wasn’t what he imagined as a boy.

“That wasn’t the story in my head. That’s not what I dreamed of,” he says.

In December, Gough popped the question in their home after decorating for Christmas. The tree was lit and the fire glowing when he knelt down and asked Guterman to marry him. This was the story Guterman dreamed about.

The two celebrated their five-year anniversary by getting legally married in New York on Feb. 21, 2013. They then recreated that fateful first date by sharing tiramisu at French Roast, the 24-hour restaurant where they first met. They were even lucky enough to snag the same bar stools they sat on five years ago.

The New York ceremony was a practical one, held in City Hall. A European honeymoon is set for the end of April.

In June, the couple will travel to Iron City to attend wedding showers hosted by family members.

“My South Georgia cousin called me and said they wanted to throw us a shower down there. She said some ladies in the church who are close to my mom wanted to help because my mom always helps with all the showers,” Guterman says. “She said they wanted to do something for her child. And we were like, ‘Yeah!’ We will come down and have a good time.”

Another ceremony, including catered meals and a chance to dress up, will take place in September when the couple will host 50 of their closest family members and friends for an intimate dinner at a restaurant they’ve rented, a catered brunch at their home and a weekend of activities in Atlanta.

There won’t be any of the trappings of a traditional marriage that their straight friends planned. Instead, there will be good food and good times.

“The most important thing to us is to celebrate with our family and friends,” Gough says. “We’re doing what feels right to us. And that is kind of liberating.”

“We’re calling it the year of marriage,” Guterman adds. 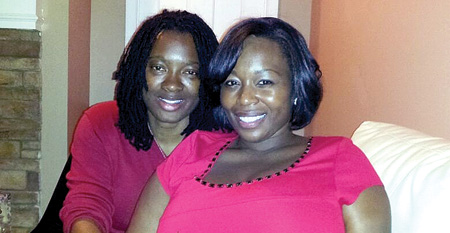 When Alisha Smith and Latasha “LA” Gaymon say their vows this summer, the Atlanta residents will give a nod to the gay past — and offer their hope for the future, not only for themselves but for all LGBT people.

“For starters we are so incredibly in love and want to commit to one another in a way that’s bigger than ‘going steady,’” Smith says. “We also feel that our marriage makes a statement to the world that as a woman who loves a woman, this does not somehow diminish our desire to get married. We’ve been dreaming about our wedding since we were little girls too!”

Smith, 31, a community projects coordinator, and Gaymon, 37, a data center operations technician, met through mutual friends and have been together for more than four years. Both say they knew early on that they had found “the one.”

“Even before we started dating, I remember telling a close friend, ‘she’s wifey material,’” Gaymon says. “At about six month of dating I knew she would be the woman that I would marry and spend my life with.”

Gaymon waited three years to pop the question, then did so in grand style — surprising Smith with a room filled with rose petals and scented candles during a weekend trip to a bed-and-breakfast in St. Augustine, Fla.

“With chocolate-dipped strawberries and champagne, I thought we were simply toasting the night to a lovely vacation,” Smith says. “However while sitting out on our private porch overlooking a moonlit bay, LA got down on one knee and asked, ‘Alisha, will you marry me?’”

Smith and Gaymon plan to legally marry in New York, then have a wedding ceremony Aug. 2 at the W Atlanta-Midtown hotel.

Their Atlanta wedding will offer a creative, vintage take on the black-tie formal ceremony, celebrating the theme of “Gay Voices of the Harlem Renaissance.”

“We both love that era so much so that is was important for us to incorporate the love stories and passion that women showed women during the Harlem Renaissance in poetry and in song,” Smith says.

“There was a whole movement of freedom, self-exploration, and unapologetic realness to be exactly who you are, as you are…we love that,” she says.

Smith and Gaymon are working with wedding planning company Precious Moments by Kenya to make the event perfect.

“The details are very important to us and our planner is working very closely with us to ensure that we capture it all,” Smith says. “Overall the event will feel regal, elegant, vintage and glamorous.

“She’s wanting to incorporate black and white photos of us in the decor, maybe books of poetry by some gay voices. Our attire will have a vintage flair, a slight nod to the 1920’s with a modern twist.”

The couple hired their planner after a brush with homophobia showed them they needed help to navigate the many wedding details.

After “falling in love with the loveliest outdoor space for a garden ceremony,” they were told “though we could hold our wedding onsite, it would have to be held inside in a banquet room and not on the outdoor lawn as community members might see a same-sex couple getting married and complain,” Smith recounts. “Devastated, we quickly hired our planner soon after.”

Their wedding, they hope, will send a message not only about their love, but about the rights that same-sex couples deserve to share.

“Our marriage says … that as a human being, we deserve every right of every single American,” Smith says.

Top photo: Lauren Lukkarila and Anneliese Singh combined aspects of their cultures and did not worry about social norms when planning their wedding. (Photos by Holly Jones Photo) Second photo: Chad Gough and Clifton Gunterman were legally married in New York on their five-year anniversary and are planning a September celebration in Atlanta. (Courtesy photo) Bottom photo: LA Gaymon and Alisha Smith plan to legally marry in New York and have a wedding ceremony Aug. 2 in Atlanta. (Courtesy photo)