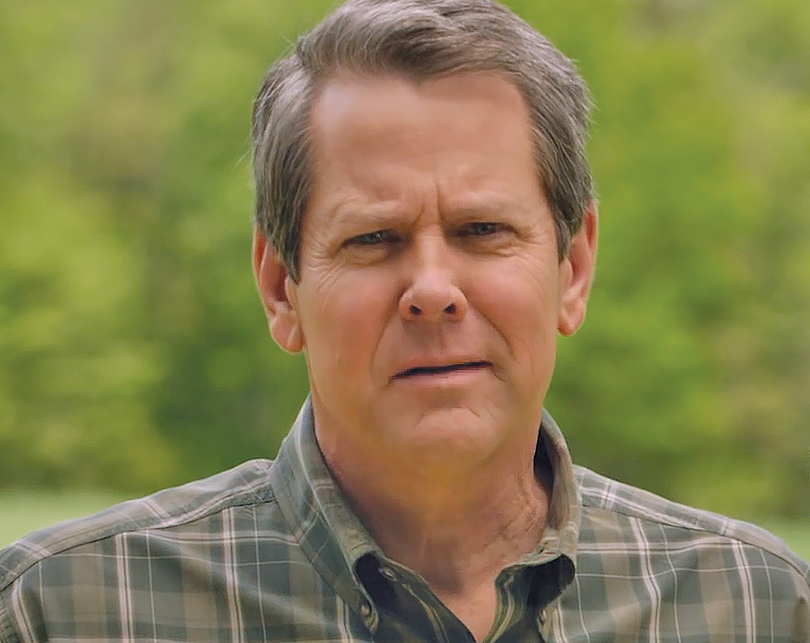 Jason Rhode
Georgia
October 25, 2018
I understand this isn’t a scientific question, strictly speaking, but stay with me on this one, because it’s a conversation we need to have. Do we have evidence that Brian Kemp is not literally the Devil? I don’t mean the operatic, edgy Prince of Darkness from movies — no Al Pacino characters need apply. I mean like the most pathetic possible incarnation of Lucifer: the bad guy who thinks he’s smart, yet keeps getting beaten by ordinary people.
I should clarify: By Brian Kemp, I mean Mr. Voter Suppression, the Republican nominee for governor. Y’know, the shoddy little hustler who looks like he’s wearing a mask made of his own dead skin.
The reason I make this comparison is that it’s almost supernatural, how Kemp keeps embarrassing himself. It’s not enough that he’s made Georgia the by-word for voter suppression in 2018. It’s not enough that his latest commercial featured one African-American in a state that is a third black. It’s not enough that he’s in cahoots with Trump, and all of Trump’s policies. It’s that his tough-guy act disappears when it’s convenient.
Here’s the best example: Kemp keeps clarifying his position on Religious Freedom and Restoration Act-type bills. “Clarifying” is a polite term for “flip-flops.” The Kemp faction of Georgia has tried time and again to get a bigoted RFRA law handed down. In fact, Kemp pledged during the primary that he would endorse any religious liberty laws put on his desk. It was the kind of thing you mumble to win a runoff.
Well, Kemp’s promises are like frozen yogurt, summer flings, and the marriages of Donald J. Trump: They last while they last. Soon enough, Kemp had changed his tune. Not surprising. Practically the only topic the man keeps a firm opinion on is voter suppression.
But I digress. By August, with a close race for governor, Kemp was warbling a different song. He said that he’d veto any religious liberty legislation unless it was a “mirror image” of the RFRA law that Clinton signed in 1993. Kemp said he wouldn’t approve of anything else.
Why the change of heart, Brian? The fact he flipped so easily on legalized bigotry suggests something about the depth of Kemp’s convictions. It may surprise the Trump-Kemp alliance that LGBTQ voters take their human rights seriously. People tend to do that, when you enshrine persecution of them into law.
That’s what RFRA bills do — they’re an excuse to shame and oppress LGBTQ Americans. If you’re a supporter of a Georgia RFRA-type bill, you’re one of two kinds of people: Either you strongly dislike LGBTQ Americans, or you don’t care and are indifferent to their suffering. Neither one is a great look. The fact that Kemp flipped on the RFRA is even more insulting than if he had stayed an simple-minded bigot. He’s not just small-minded and prejudiced; he’s a simpering opportunist about it.
There’s one thing that scares Brian Kemp more than African-American voters – and that’s the business community of Atlanta sending him to the political graveyard. Even in his dullest moments, Kemp understands what the businesses of Atlanta and Georgia will do if any RFRA bill passes.
They will pull up stakes and leave. The corporations of this state cannot take the moral, economic, and political risk of fallout with the LGBTQ community. Does Kemp really think Delta and Coke will take that bullet, just so he can preen around the Governor’s Mansion, making collect calls to the Oval Office? Please. If any RFRA bill passes, the entertainment industry will leave Georgia, full stop. And the dream of the New South will grind to halt.
Seriously. What does the Wannabe-Governor think is going to replace business in Atlanta? Him in a grey soldier’s blouse, showing tours of Civil War battlefields?
LGBTQ civil rights aren’t microwavable leftovers. You don’t check out the temperature before you dive in. Human dignity is a matter of moral clarity. It’s an either/or proposition, Brian. Either you’re for equality or you’re not. Like most of his decisions, Kemp’s RFRA turnaround was made out of fear. We already know he’s dull. But can you imagine what it’s like to be slow and scared? At the same time?
When it comes to courage — moral, political, or otherwise — it’s hard to beat the LGBTQ community. It’s a lesson Kemp could learn. Don’t worry. He’ll have plenty of time in retirement.