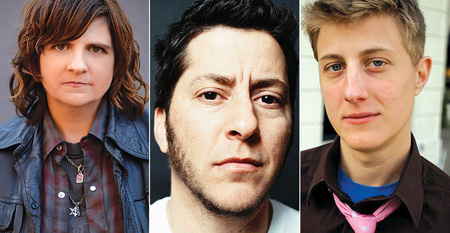 “Real Man Adventures” by T Cooper is not a memoir. Really.

“It’s not a memoir! I swear!” Cooper states in an email interview.

His book “Real Man Adventures” (McSweeney’s, $23) includes stories about his life, but is so much more. Besides, Cooper stresses, he’s only 40 and that hardly qualifies him to write a memoir.

“There’s a part of the book where I say that the book is ‘a meditation on masculinity with some autobiographical elements’ — and that’s completely true. I mean, it’s a collage: there’s a bunch of interviews in there, conversations, straight journalism, artwork, a couple poems, letters and some essays,” he says.

Cooper, the author of “Lipshitz Six, or Two Angry Blondes,” “The Beaufort Diaries” and “Some of the Parts,” returns to Atlanta for a Dec. 15 event also starring playwright and actor Scott Turner Schofield and hometown favorite singer/songwriter (and one-half of Indigo Girls) Amy Ray.

Dubbed “Tall Tales and Real Man Adventures,” the evening is a fundraiser for Charis Circle, the nonprofit arm of Charis Books & More, and will include interviews, performance and singing.

As a trans man, Cooper is well aware of gender and has been unafraid to broach the topic in fiction. But he said now is the time to delve into it head-on through non-fiction.

“I think we as a culture are pretty much beyond the tranny-tell-all books where you start at Point A with the unhappy childhood being ‘trapped in the wrong body,’ on through the torture of high school, and finally end at Point B with explicit description about surgeries, hormones, social transition, etc.,” Cooper says.

“I don’t think every book about a trans person’s life needs to cover that material anymore.”

Schofield, an Emory graduate who jumpstarted his career at Charis Books more than a decade ago, is excited to collaborate with Ray and Cooper — this performance marks the third time they’ve worked together in Atlanta over the years.

“The first time we performed together we all noticed a tangible commonality … all our work somehow deals with gender and sexuality. And we are all working through own experiences. But we could feel a common thread,” Schofield says.

While the three share a common thread, they are also very different by working in different mediums, he adds.

“I’ve been in Atlanta since 1998, but I keep leaving, moving to L.A., Alaska, France. Then I keep coming back. [Atlanta] is like a dramatic ex-girlfriend. But I truly love Atlanta,” Schofield says.

His dream job is to be a talk show host who interviews artists of all kinds. The Dec. 15 show will be structured like a talk show with Schofield interviewing Cooper and Ray, with Ray closing out with a musical set.

One question for Cooper — does he think about gender all the time? The answer is no. Except when he does.

“I mean, I have the luxury of not having to think about it,” he says. “And I like it that way. That said, I deal a lot in the book with this exact question — that is, the times when I have to think about it, when there are safety issues, medical issues, privacy issues, or the rare times when people are being unknowingly (or more rarely, knowingly) insensitive, etc, just a whole slew of times when I am reminded of things that might be different about my way of going through the world.”

For Ray, gender is not so easy to define in a binary world.

“I am half and half and whatever you call me is fine,” she says. “I work every day to be comfortable in my body and in rare transcendent moments, I am, but it’s the job of my lifetime to appreciate my physicality and always project what is inside me so I can celebrate this life I’ve been given.”

All three praise Charis and feminist bookstores with Schofield and Ray acknowledging the Atlanta landmark’s role in lifting up their careers.

“Charis and stores like it are a touchstone for me. I try to visit feminist bookstores when I travel because they have such a great community vibe and always point me in the right direction,” Ray says.

For Schofield, his career literally began at Charis with the performance of “Underground Transit” at the bookstore more than a decade ago.

“Charis has literally been there from the beginning for me. And now Outwrite is closed. We’re watching these important places close and we don’t want to see it happen to Charis,” he says. “We just have so much respect for Charis. If for nothing else go to this show to support Charis.”