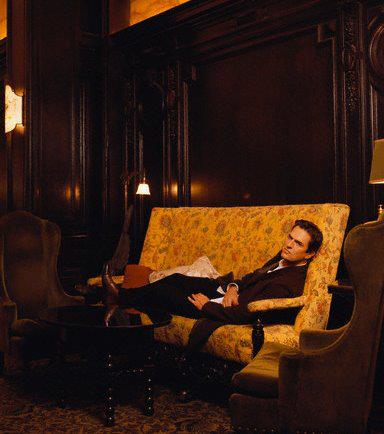 When he decided to take on a film about Oscar Wilde, actor Rupert Everett had no idea it would take him ten long years to get the movie financed, made, and released.  The wait was worth it, though – the new “The Happy Prince” (directed and written by Everett and starring him as Wilde) is landing him some of the best reviews of his career, taking a peek at the final days of the legendary gay playwright.

The idea for the project came at a time when Everett was doing some reflection about his career. “My acting career had sort of dried up and I had been writing books, always with the idea of trying to segue into screenplays,” he said. “I thought I had to take my career into my own hands. I decided I’d write a screenplay and Oscar Wilde was the ideal character, one I could pour a lot of myself into. He is a patron saint figure and he has been woven through my life. I had performed in a few plays by Wilde and in two movies and everything seemed to direct me in that direction.”

Everett had never thought of directing the movie but over the ten years, he lost various directors. Eventually, he realized this would be his directorial debut. “I decided – again – I would have to take it into my own hands and direct myself.”

Making the movie was complicated because of the time restrictions and having to cram so much work into each day’s shoot, but he enjoyed it, especially getting to act with the likes of Emily Watson, Tom Wilkinson and Colin Firth. “If you choose the wrong people, you can never make the movie you want,” he said. “I chose really well and got great actors. I was incredibly supported.”

The actor appeared as Wilde in 2014’s stage version of “Judas Kiss” after five years of not getting any money for the film. “I thought if I could do that play I could use it as an audition speech to strum up some interest,” he recalled. “That is what happened. We put it on in London and that is how I got with BBC and Lionsgate. Everything started at that point.”

He did his due research about Wilde but didn’t make any ground-breaking discoveries. “I had such a strong conviction about him right from the beginning,” Everett said. “Everything I learned confirmed what I thought. I never had any real surprises. This sounds like Shirley MacLaine, but I felt I knew him from the beginning.”

He wanted to show an Oscar Wilde that hadn’t been seen before. “My take on it was going to be quite radically different from all the previous takes we had seen. The first three films about Wilde treat him reverential, like a household god, with a heroic demeanor. I felt I had a line on him as the last great vagabond of the 19th century, a jailbird, a trickster. I think that is how he was near the end.  I thought it was an interesting change. I kept with that notion. I loved the idea that he was penniless and slightly disheveled, with old socks and slightly toothless, like a Quasimodo character. “

Everett feels audiences have been surprised at this new angle. Many people know about Wilde but they don’t know all the details, he said. “They know the name, that he was a great writer, that he was witty. But they don’t know the inside story of what happened to him and the importance of bridging the two centuries. With him came the debate on homosexuality, which didn’t exist for a while.”

Everett and Firth starred together in the landmark gay film “Another Country,” which the actor admitted he still gets comments about.  “So many people come up to me and tell me it was something they took to heart when they were young and determining what path to take,” Everett said. “Colin gets that as well.  I am very proud of it.”

He is happy to see a time where gay actors are getting more meaty film work. The next challenge, though, is to prove that gay actors can have the same range as their heterosexual counterparts. “I think things are definitely on the move and there is lots more stuff going on. It’s all very well with straights playing gay parts but it needs to go the other way around as well. I don’t see why everyone thinks it’s easy for Sean Penn to access his inner bottom whereas it’s not possible for a gay person to access their inner heterosexual. ”

“The Happy Prince” is now playing at the Midtown Art Cinema, Springs Cinema, and Taphouse.