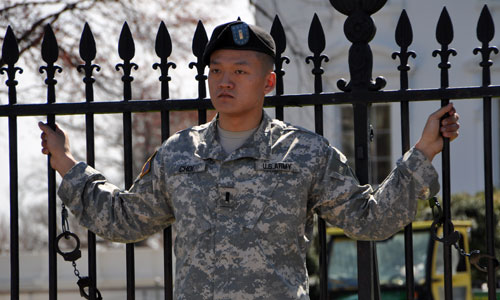 “When there’s a time when our leaders are unable, unwilling to do the right thing, somebody has to step up to the responsibility.”

— Lt. Dan Choi, who is gay and being discharged from the Army, explaining why he chose to handcuff himself to a White House fence in a dramatic March 18 protest against “Don’t Ask, Don’t Tell.” (DC Agenda, March 25)

“I’m among the millions of parents who have been in a gay or lesbian relationship. It hasn’t been an easy road lately, but I feel there are no mistakes in my life.”

“I feel like the biggest weight is off my shoulders, Publicity stunt my a** this is MY life”

“I am proud to say that I am a fortunate homosexual man. I am very blessed to be who I am.”

— Pop singer Ricky Martin, in a coming out message on his website which cited his two sons as his inspiration to speak out (Rickymartinmusic.com, March 29)