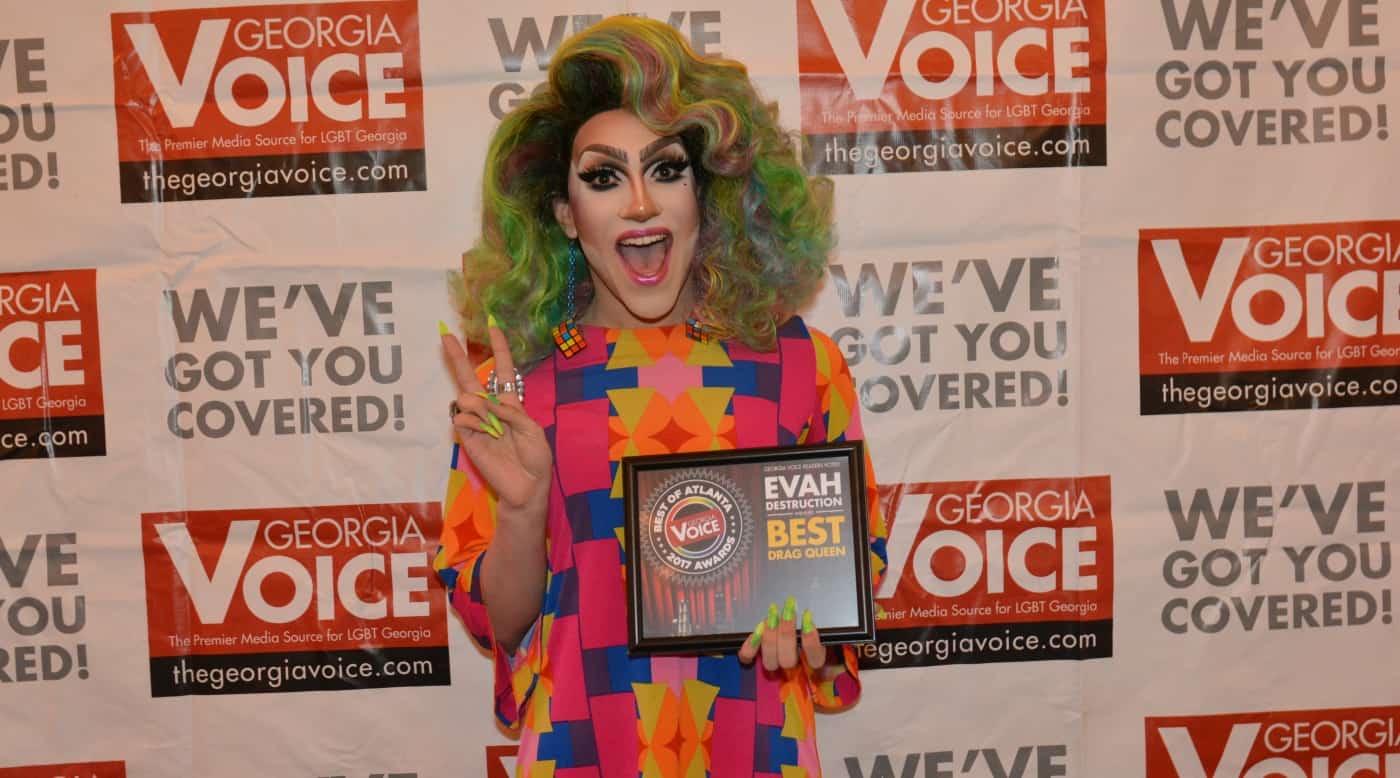 One of LGBT Atlanta’s acting treasures was brought to light in the past year, as Broadway veteran Robert Ray (robertrayproductions.com) ended a 10-year hiatus from the stage to own the lead in Out Front Theatre’s “Priscilla, Queen of the Desert.” Despite focusing on the behind-the-scenes side of the industry for the past decade, the theater and cabaret legend didn’t miss a beat in the disco-heavy musical, and easily won his way back into audiences’ hearts.

The braintrust behind one of Atlanta’s most popular theme parties is also the GAY-T-L’s favorite behind the turntable, with DJ Diablo Rojo (facebook.com/deejaydiablorojo) winning best DJ. Rojo helped create the wildly stylish Manshaft parties, and folks have faith that there’s euphoria waiting to be discovered anytime he’s spinning the beats.

Atlanta native Jordan Michaels McCord (facebook.com/Jordanmichaelsmccord) didn’t start performing drag until his mid-30s, but the late bloomer hasn’t taken long to prove that he’s got special talent. This year’s win as best Drag King makes is a three-peat for McCord, who also took home the 2016 Mister Georgia U.S. of A. crown.

The three-time Best of Atlanta winner Evah Destruction (instagram.com/evahdestruction) continued her ascension to international trendsetter, to the point that a mini internet beef was stirred when a contestant from the latest season of “RuPaul’s Drag Race” was accused of borrowing too much inspiration from the performance that launched Evah Destruction’s viral fame. The Atlanta star is helping off-beat become vogue, and has become the city’s most intoxicating export.

Nobody devours LGBT Atlanta’s funny bone like Brent Star (brentstar.com), who defended his title as the funniest comedian in Atlanta. Whether in his social media short skits, hosting bingo at Pallookaville or twirling around town dressed as Wonder Woman, Star knows how to keep a smile on everyone’s face.

After years of building his name and brand through indie hustle, Atlanta rapper J. Tyler (jtyler.com) recently released his debut EP “Prelude.” The album, available on iTunes and Spotify, foreshadows the trail J. Tyler hopes to blaze as a gay rapper trying to break through in a genre not usually considered fertile for LGBT artists.

Serious times have inspired LGBT Atlantans to favor the astute perspective of public radio over Top 40 divas, as WABE 90.1 (wabe.org) won a somewhat surprising victory as best radio station. WABE has long been a favorite of the community for its in-depth reporting and on-air talent, but real news has never been as important now that we’re living under a president who peddles alternative realities.

When you Google Berlinda Wall (twitter.com/berlinda_wall), the search engine tries to redirect you to the edifice that used to separate East and West Germany. However, in the novel that won her this year’s best writer/playwright, “The Crown is Mine,” the drag queen-turned-author brings together different worlds with the story of a small-town Georgia boy arriving in the big city of Atlanta to compete in a drag pageant.

There are no boundaries to the talent of Royce Hall (twitter.com/iamroycehall), a breakthrough trans artist who fuses jazz, hip hop and consciousness. In addition to singing and songwriting, Hall brings a breadth of instrumentation to shows, playing the piano, bass and acoustic guitar, along with a variety of horns and percussion instruments.

Georgia Voice readers showed their appreciation for storytellers who focus on the LGBT experience by naming as best theater Out Front Theatre Company (outfronttheatre.com), which also includes queer, intergender and allies in its mission. As if its productions of “Priscilla, Queen of the Desert” and “A Kid Like Jake” hadn’t already ensured that Out Front’s inaugural year would be a memorable one, the group gained national attention when critics attacked its queering of the Old Testament in “The Most Fabulous Story Ever Told.”

The always LGBT-inclusive Actor’s Express (www.actors-express.com) was the runner-up, and third place went to 7 Stages (www.7stages.org).

When LGBT Atlantans need a quick and quaint reprieve from the bustle of the city, the Atlanta Botanical Garden (atlantabg.org) remains the destination of choice. The stunning arrangements set against Midtown’s soaring skyline provide the ideal setting for a first date or anniversary, or simply an afternoon of “me time.”