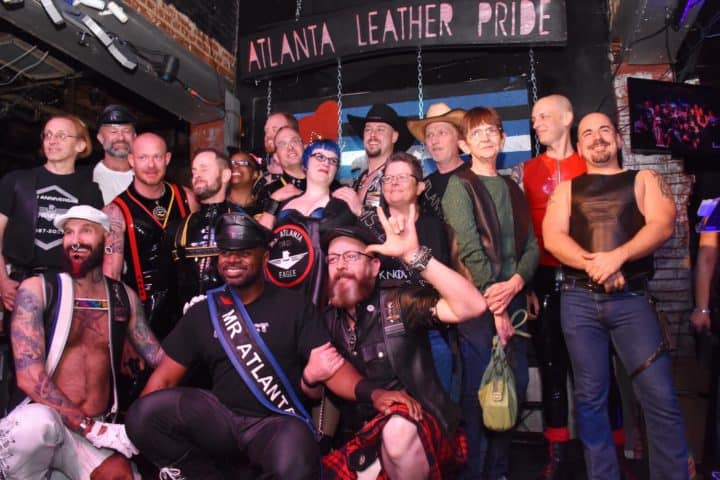 Atlanta Leather Pride: Past and Present

The leather scene has been part of Atlanta’s LGBTQ community for more than 25 years, although the official Atlanta Leather Pride weekend has only been around for about a decade. Its beginnings are rooted deep in contests like Mr. Atlanta Eagle and Ms. Atlanta Eagle. Both started in 1995 as a way for those with a love for leather to build their community through competition. Both contests made their way into the 2000s but soon took a hiatus from the Atlanta leather scene. In 2009, the return of Mr. Atlanta Eagle made for an easy conversation about the future of leather in the South.

“The Eagle approached us and said do you want to take over the contest next year?” said Nitro Hankinson , founder of ALP. “We gave them the stipulation. We’re here for this, but it’s not just going to be a contest. We’re going to do a full weekend to bring money into the bar and pack out the bar. That’s when in 2010, it was our first year for Atlanta Leather Pride.”

Hankinson and his late partner, Alan Penrod, worked together to create the events first weekend back in 2009. Hankinson, International Leather Boy 2011 and Penrod, Mr. Atlanta Eagle 2009 and 2nd Runner Up International Mister Leather 2009, all about contests and titles, knew they’d still bring in the crowds. But an entire weekend of events was a different ball game. Their goal: create a weekend of inclusion and education, all intertwined with loads of fun. But in January of 2016, Penrod, the co-founder of ALP and Hankinson’s partner, died.

“He passed away after a sudden medical emergency. He was 53 when he died,” said Hankinson. His legacy throughout the leather community has made a lasting impressing not only in Atlanta but across the country. Hankinson knows he wants to continue growing his and Penrod’s event into a weekend even more massive.

“People do travel from all over. One of our judges is coming in from San Francisco. People really do come from not just the Southeast but from Cincinnati, Ohio, and Toronto, Canada,” said Hankinson. “Every city goes through cycles when it goes up and down. Right now, we’re definitely in an upswing within the leather community.” From Friday social bar night to Saturday’s gear swap sale, there’s never a moment to not interact with someone else in leather. Even into the late night hours, parties at Heretic Atlanta and Atlanta Eagle will give visitors a chance to let loose in as little gear as they’d like.

“There’s a lot of leather; there’s a lot of gear, rubber, sports gear…an entire spectrum,” said Hankinson. “Folks just find this is a welcoming environment. We tell folks, let your freak flag fly. We just want to provide a safe space for people to be themselves.” He knows over the years, through mainstream media, taboo topics have become more widely accepted. While ALP focuses on Fundraising and contests, Hankinson found another weekend for those looking to push limits.

“There’s still that paranoia in the back of our mind. Every city has its own feel but I have to say, we have many kinks here,” he said. “ Many times it’s folks you’d never expect. You’ll see folks that will come out to the Eagle in full gear, and you’re like wait a minute. Didn’t you do the mortgage on my house? My late partner was a lead scientist at the CDC and would go speak at conferences and then come home to do these types of events.”

For as long as Hankinson calls Atlanta home, his dedication will be to this leather community and growing it as a place for people to learn and embrace just how leather makes each person themselves.