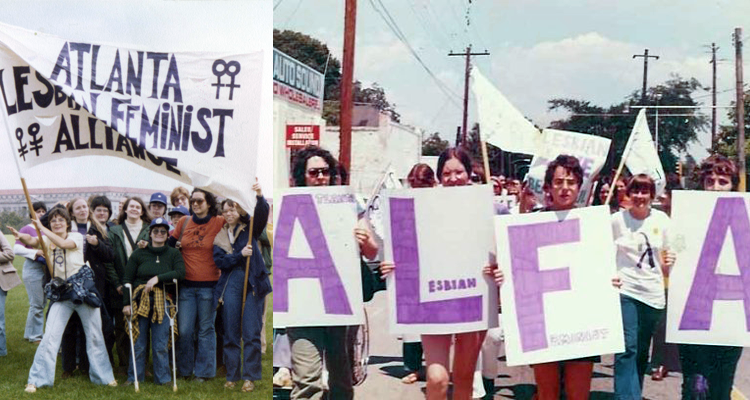 Celebrating the 50th Anniversary of the Atlanta Lesbian Feminist Alliance

In honor of the 50th anniversary of the foundation of the Atlanta Lesbian Feminist Alliance (ALFA), there will be two Zoom events happening this month.

ALFA was formed in 1972 as a breakaway from Atlanta’s Gay Liberation Front and Atlanta Women’s Liberation. In an article published in August 1972 in the counterculture newspaper The Great Speckled Bird, the group described their mission

“We are a political action group of gay sisters,” they wrote. “We are the large coordinating group for smaller consciousness raising groups and an umbrella group for Women’s projects and gay Women’s projects. We will serve as a communications center for all these groups. We intend to provide alternatives for ourselves and all sisters that will free Women to live outside sexist culture. We aim to reeducate the non-homosexual community, society in general, by being visible and vocal at every opportunity. We aim to reach out to all sisters in order to establish solidarity. We intend to work with gay brothers to further our mutual goals of gay liberation. We intend to initiate demonstrations and public actions to emphasize our demands.”

ALFA was the first out lesbian organization in Georgia and was formed by a group of lesbians and feminists who had been activists in a multitude of movements of the time, including those for Civil Rights/Black Empowerment, Women’s Liberation, anti-war/anti-imperialist, and workers’ rights/anti-capitalist movements. ALFA was a combination social and political organization which held and valued women-only space before eventually dissolving in 1994. Over the years, other lesbian groups and organizations found their roots in ALFA and the lesbian network it created.

At both events, co-founders and members of ALFA will share some history on the organization and others that came from it.

The first event, sponsored by lesbian literary and art journal Sinister Wisdom, will happen at 7pm on June 21. The one-hour event will include speakers like ALFA co-founders Lorraine Fontana and Elaine Kolb and members Margo George, KC Wildmoon, and Maria Helena Dolan. The talk will be moderated by Julie Enszer, editor of Sinister Wisdom. You can register for the event here.

The second event is sponsored by the Georgia State University Women and Gender Archives and will be held at 7pm on June 23. Speakers include Fontana, Kolb, and George, plus Helen Schietinger, one of ALFA’s co-founders; Eleanor Smith, who will speak about disability access issues at ALFA and Feminist Women’s Chorus, a group that grew out of the ALFA community; and Chris Carroll, who will speak about Lucina’s Music, another group that grew out of ALFA. There will also be a video of Frances Pici speaking about the Red Dyke Theater. The talk will be moderated by Morna Gerrard, archivist of the Women and Gender Collections.

The GSU Archives event will also include video clips and photo galleries as well as a Remembrance photo display of some of the ALFA community members who have passed. There will be a question-and-answer segment at the end. Links to more information on speakers and ALFA will be posted in the chat as the program progresses. Register here.