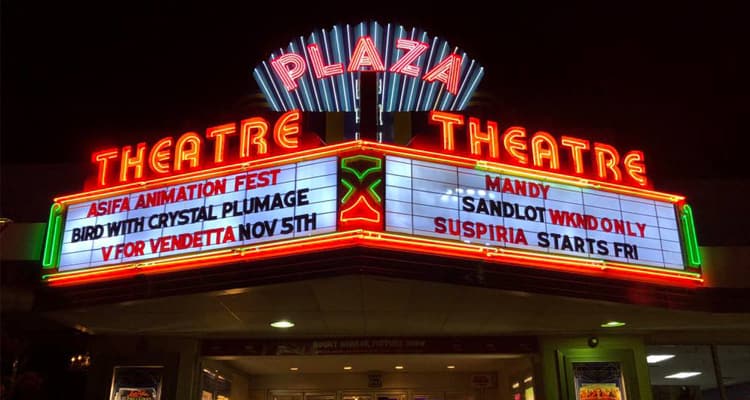 The Plaza Theatre, located on Ponce De Leon Avenue, is a historic landmark for Atlanta. It is the longest operating movie theater in the city, the only independent one, and resides in one of the first strip malls in America. Now tucked between The Righteous Room, and a Fed-Ex, the theater first opened its doors inside of the Briarcliff Plaza on Dec. 23, 1939 with a showing of “The Women” starring Joan Crawford. The Briarcliff Plaza was developed by Relnac Inc., with the architectural mastermind George Harwell Bond behind the blueprint. Bond also devised the Second Ponce de Leon Baptist Church in 1937, one of the three churches known as “Jesus Junction” in Buckhead as well. The theater has served as a historical bookmark for the urban ripple that began to take place in Atlanta. Before the plaza’s existence, it was a residential location full of apartment buildings and personal homes.

Looking at the Briarcliff Plaza, it’s easy to imagine that it was one of America’s first strip malls. Although the stores have changed, it still gives off a vintage aura that can’t be replicated in any other fashion other than standing the test of time. However, the Plaza Theatre entrance bears the classic marquee – signifying it’s graceful age. In the past, the plaza was pinned down with the name Plaza Drugs because of a pharmacy of the same name that occupied the same space where Urban Outfitters now resides. The pharmacy’s name certainly didn’t help because the plaza was riddled with drug paraphernalia and prostitution. Accordingly, The Plaza Theatre was showing X-rated films, most likely to correlate with the vibe that the plaza was giving off.

This continued until George LeFont bought the theater in 1983 after Robert Griffith made a push for renovations of the plaza. LeFont began the trend of improving the venue, a chain reaction that has laid the groundwork for future owners. The drastic improvements came with LeFont pushing the showings of independent, art-house, and foreign films. He took the initiative to convert the second balcony into another seating area. Despite his best efforts, he was forced to put the theater up for sale in 2006 due to the competition from other metro Atlanta theaters.

In 2006, the theater was bought by Jonathan and Gayle Rej. Due to the need for extensive renovations, in 2013 they passed the theater onto Michael Furlinger of Furlinger Cinema Services. He brought the financial and business means to allow for the theater to prosper. The current owner, Chris Escobar, had been in the background – witnessing the changes as the executive director of The Atlanta Film Society. In 2017, the theater was purchased by Escobar. However, Furlinger still has a hand in the theater collaborating with Escobar, embracing the needs of the theater to ensure its survival.

There has been a looming cloud over the fate of the movie theater due to distribution rights, surrounding competition, the convenience of streaming entertainment, and the inevitable gentrification of Atlanta. The plaza currently has pending proactive preservation which would protect the property from being pushed out by larger companies. The idea of an independent theater is daunting – but this theater is a community who pour their heart into its success. Contrary to the belief that the theater has been on thin ice due to the rapid changes of ownership, and other stipulations beyond its control, it’s doing well.

Speaking with Richard, an employee of five years from the Plaza Theatre, he has no concerns about the future of the theater. “I’ll always be optimistic about this theater. We are doing very well,” he says. “Our partnerships are strong because they are our friends.” The theater’s partnerships include the Atlanta Film Festival and the LGBTQ film festival Out On Film. The theater shares hosting Out on Film along with Landmark Midtown Arts Cinema and the LGBTQ venue Out Front Theatre Company (Sept. 26 through Oct. 6).

The Plaza Theatre is a one silver screen venue that seats up to 434 guests from the floor to the balcony. There’s a full-service bar, precisely thought out according to the films that are being shown. The concessions stand isn’t intimidating, it holds an older popcorn machine, and Cheerwine on a fountain machine. The theater is instilled with a heart full of love from the Atlanta community, and hones a sincere appreciation for all of the motion arts – the Plaza Theatre is here to further its history.