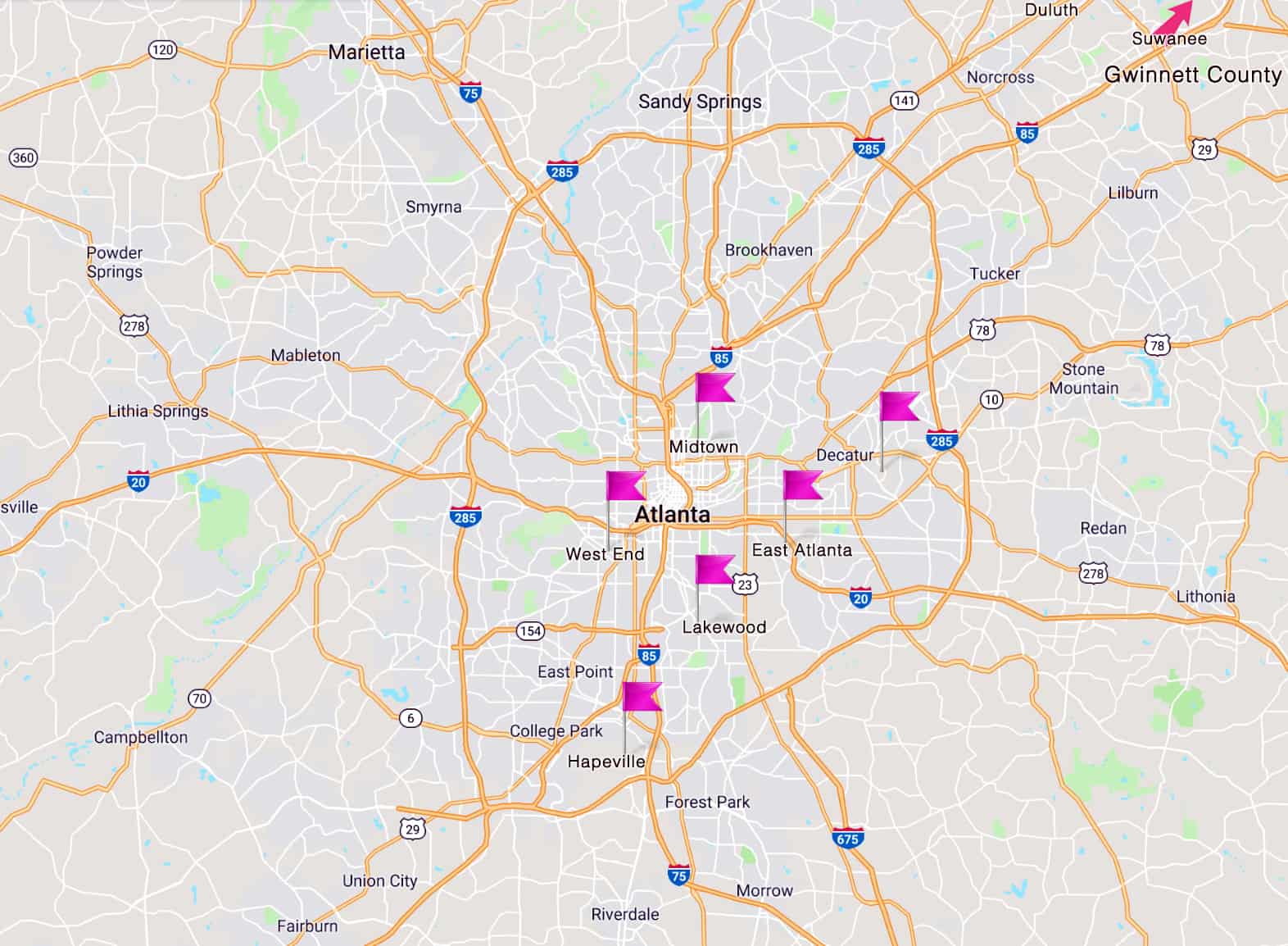 Where Have All the Gayborhoods Gone?

Growing up as a black youth on the city’s south side, Spencer Hayes would’ve never imagined calling one of Atlanta’s most affluent and whitest neighborhoods home. Yet decades later, the black gay real estate agent and his partner of 21 years live in East Cobb, and they couldn’t be happier. Hayes’ voice lifts excitedly as he describes his modern-on-the-inside, four-bedroom colonial home. He’s thrilled to be politically active and even finding common ground with his Republican neighbors.

“The old culture is the metro Atlanta area is dying off,” he told the Voice recently, crediting out-of-state transplants as well as younger families with the shift. “These communities are more open.”

Stories like his are becoming common across the city as gay men and women, once more likely to set down roots in traditional gay enclaves like Midtown, are branching out. They’re buying bungalows near the airport, snatching split level homes in the West End, and even raising rainbow flags in some of the area’s most traditionally conservative neighborhoods. Realtors say it’s the result of increased in town prices and softening attitudes about who people are willing to call neighborhoods.

While it doesn’t spell the end of all housing discrimination by a long shot, local real estate professionals say it is a positive step. “We’re mixing amongst other families, and that’s the trend I’m seeing,” said Hayes, who works with Palmer House Properties. “It’s not really about the gayborhood.”

While Decatur and East Atlanta continue to be places where gay families gravitate, Hayes named Lakewood and Hapeville as two emerging hot spots due to price and proximity to the airport. “Lakewood is becoming very interesting to many gay couples,” he said. “Investors are flipping those bungalows and turning them into affordable properties.”

Gay families are increasingly joining straight ones outside the perimeter in Gwinnett County, according to realtor Tim Hur, with Point Honors and Associates Realtors. He named Duluth and Suwanee as places where families are looking, in part because Midtown is increasingly too expensive. “It’s not because we don’t want to live there,” he said. “It’s because there’s nothing there for us.”

The median list price per square foot in Midtown is $349, versus an average of $229 throughout the rest of the city, according to the online real-estate database Zillow. Rising prices as traditional gay hubs have become trendy has been blamed for the changing face of gayborhoods across the country – from Washington D.C.’s Dupont Circle to Chicago’s Boystown. Here in Atlanta, Philip Rafshoon has experienced it first hand. The so-called “Mayor of Midtown” ran Outwrite Bookstore & Coffeehouse, at 10th and Piedmont Avenue, for 18 years before rising rent forced him to shut his doors in 2012.

But Rafshoon, who now works with Midtown Alliance, said the LGBTQ community has also changed. Back in the day, he said the bars, bookstores, and social spots that made up the gayborhood were where marginalized people could connect and feel comfortable. Rafshoon said the rise of the Internet made it easier to meet people online, erasing some of that social need. Social progress also sped up the demise of the traditional gayborhood, he said.

“As we gained more rights in the ’80s and ’90s, people felt more comfortable living outside of the neighborhood,” he said, adding that while it may be sad in some aspects, it’s overall a sign of progress. But the gayborhood isn’t totally dead. “There’s still a big LGBTQ presence in Midtown,” he said, offering gay-friendly spots along Juniper Street as examples. “There’s plenty of places for our community to still frequent.”

For real estate agent Hayes, stepping out of the city was a struggle. He worried about acceptance in District 6, once represented by well-known gay rights adversary Rep. Tom Price (R-Ga.). But the couple could get more house for their money there. And they were impressed by how friendly everyone seemed. “We took a chance,” Hayes said, “and it actually blossomed into a beautiful thing.”