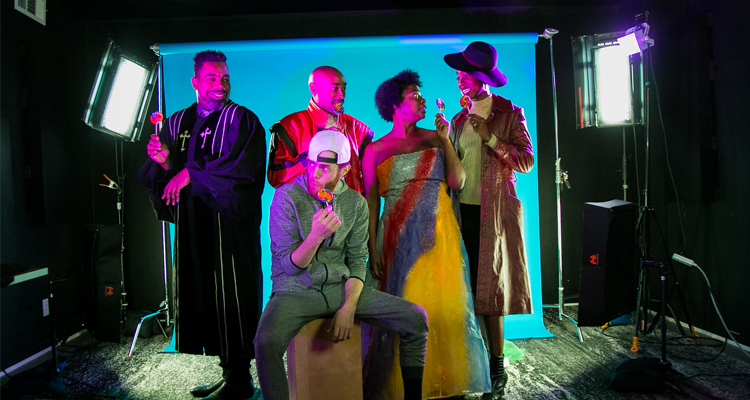 As theater continues to return full time, both “Bootycandy” and “Beautiful: The Carole King Musical” are likely to bring in lots of local LGBTQ audience members.

Actor’s Express’s “Bootycandy,” by playwright Robert O’Hara, follows the character of Sutter and explores what it’s like growing up Black and gay in America. Vignettes bring us to the main character’s childhood home, church, bars, and motels.

The main character is a playwright trying to figure life out, says director Martin Damien Wilkins.

“You follow his coming of age, and him dealing with relationships, but it’s also a love letter to the women in his life, particularly his mother and grandmother,” Wilkins said. “I think of it really as outrageous and fun and a thoughtful commentary on not just what it means to be coming of age as a Black queer man in the era he was writing it, but what it means to be an artist trying to express yourself as who you are and tell the stories you want to tell.”

The play has a cast of five. Damian Lockhart plays Sutter and the other four ensemble members play different characters in his life and in the vignettes. The only other male figure in the play is Sutter’s stepfather.

One of the aspects Wilkins likes about the play is that it breaks expectations: “The main character often breaks down the fourth wall. It is a show that hopefully keeps audiences on the edge of their seat.”

Wilkins met O’Hara in 2005, and he found the play to be insightful. As a Black gay man himself, he related to it and the work stayed with him, even directing a version of it in 2017 in Charlotte, where he currently lives.

“For me, it’s one of safety, and you can see that with some of the laws being passed now, feeling you can occupy your space as your most authentic self,” he said. “Obviously there are also influences such as people who have very conservative religious views — often putting on you that God didn’t make you the way that you were.”

Part of Broadway in Atlanta’s 40th anniversary season is the jukebox musical, “Beautiful: The Carole King Musical,” chronicling the career of the legendary singer/songwriter. Out actor Matt Loehr plays Don Kirshner in the show.

The actor was with the tour in the fall of 2019, but in spring 2020 COVID-19 shut it down. The tour started again last fall, and he and the ensemble are excited to be back on the road.

“He is the founder of Aldon Music in the ’60s and he is responsible for getting Carole King (and others) their start,” he said. “He had dabbled briefly in singing but had a knack for hearing a hit.”

The actor felt there were similarities between him and Kirshner and that he could tap into the character pretty easily.

The production is known for its universal appeal.

“This music is timeless,” Loehr said. “Every generation that hears it falls for it. It’s just so heartfelt and simple. I didn’t know [Carole] wrote so many of these songs for others.”

The message of the show, he said, is empowerment and trusting yourself.

“For her to finally basically believe in her own voice and produce ‘Tapestry’ and have it be one of the most Grammy nominated albums of all time — everyone can relate to that,” Loehr said. “Sometimes, you have to go with your gut and be yourself. You are as beautiful as you feel. It is so optimistic but realistic.”

King herself is also known for being LGBTQ friendly and being an advocate for LGBTQ equality and a range of progressive issues.

Loehr grew up knowing he wanted to be in musical theater. Among his many credits, he was also seen in the original cast of the Tony Award-winning “The Producers.”

“Beautiful: The Carole King Musical” runs May 20–22 at the Fox Theatre