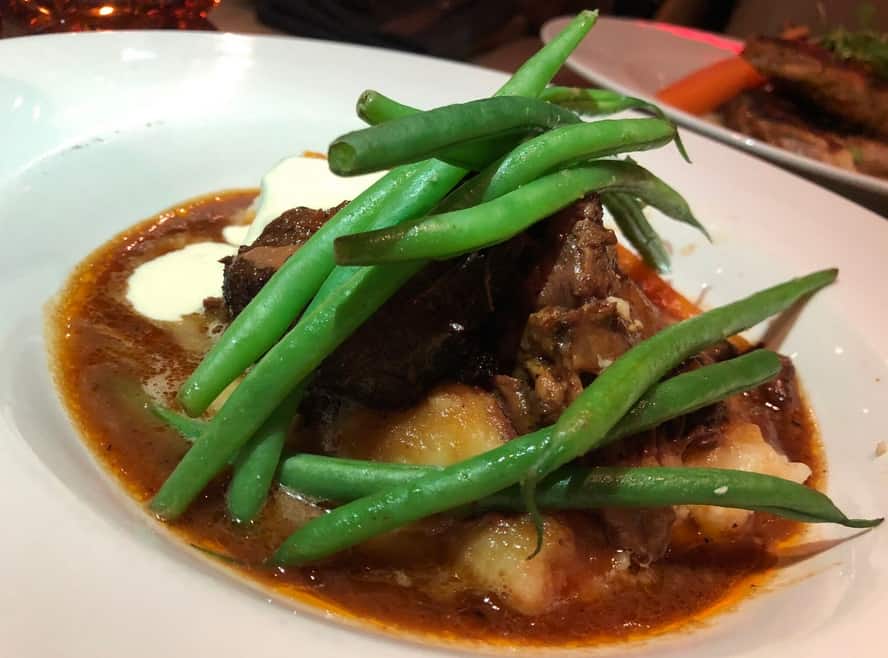 Murphy’s: Go For The Corn, Not The Clink

Cliff Bostock
Culture
September 14, 2018
I can never write about Murphy’s Restaurant in Virginia-Highland without telling this story: Over 30 years ago, I landed at my first meeting of Alcoholics Anonymous. The lead-up wasn’t pretty. I was driving home after hours of drinking and decided to break into a house that turned out to be owned by Tom Murphy, whose Virginia-Highland restaurant I loved. The cop who wrestled me to the floor after I shattered the door window gave me an ultimatum. He said, “You can go to jail or you can pay for the window and go to an AA meeting.” I seriously asked him to give me a minute to think about it. (I’d been to jail before.) I chose AA. The policeman actually picked me up the next day and deposited me at the gay AA clubhouse, Galano. I never drank again.
At the time, Murphy’s was a basement-level delicatessen near the Virginia-Highland fire station. About 10 years after my epiphanic moment, with the neighborhood in the throes of gentrification, Murphy’s upgraded to its present location (997 Virginia Avenue). It became one of the city’s most popular and dependable venues, employing a long line of now-famous chefs.
I last went to the golden-lit, brick-walled-but-airy restaurant with my Friday night dining pals two years ago and we returned last Friday. The menu still mainly features fancified comfort food. Inevitably, I ordered the Guinness-braised brisket, arguably the city’s best. It’s always super tender, properly fatty and juicy, and served over creamy mashed potatoes. There’s a mild spike of horseradish and some green beans whose crunch provides a contrast to the otherwise creamy textures. The only meh element of this visit was a chunk of roasted carrot which added color but little taste.
The mashed potatoes and carrots returned in half a roasted Springer Mountain chicken flooded with a delicious tarragon jus. Unfortunately, the chicken breast was significantly dry and chewy. I don’t know whether to blame the restaurant or Springer Mountain, whose humane, antibiotic-free treatment makes its chicken the choice of thoughtful chefs. In my own experience, the birds usually have great flavor, but can indeed be a bit chewy. Moisture is hard to predict in any chicken that has not been grossly injected with “broth.”
The kinkiest starter on our table was the elote, the grilled corn popular in Mexico. At Murphy’s, the corn is flash-fried on the cob, then cut into strips, dusted with parmesan, sprinkled with cilantro, and served with roasted-garlic mayo. We also sampled the tasty Mexican-inspired tortilla soup and a flavor-blasting special of butternut-squash soup. Go for the elote.
We were way too full to consider dessert. Prices are fairly high with my brisket near the top at $23. Service is always the best. Ask for Leonard. The restaurant, by the way, is known for its wine list, but I’d have to go to jail to tell you about it.
NEW: I’ve visited two new venues worth your time, although both are still fine-tuning. First is the Po’ Boy Shop (1369 Clairmont Road). I went straight for the classic Muffaletta and found it good except for the untraditional sub-style bread that was borderline-soggy. There are other po’ boys and fried seafood plates, plus a bracing gumbo.
The Baker Dude is the most wonderfully disorienting place I’ve visited in a long time. It’s located inside Building B of the Beacon development in Grant Park (1039 Grant Street). Owner Orran Booher became well known for his cupcakes at an earlier location. Here, you get baked goods plus breakfast, lunch, and dinner options. And singing servers. In fact, there are cabaret performances planned. Check the website (BakerDude.com) for details. I’ll write more soon.