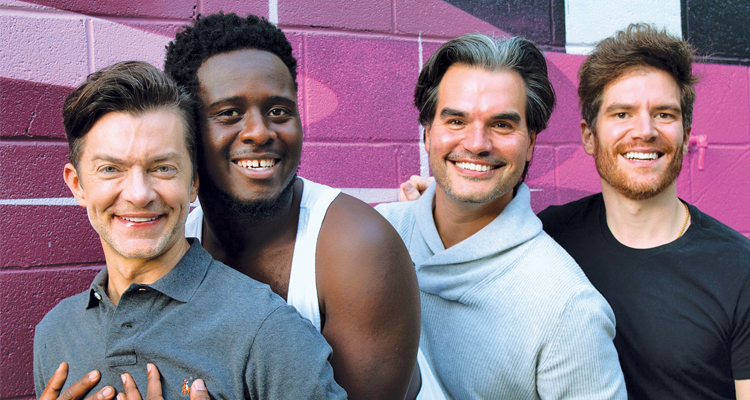 If your quarantine time has been spent listening away to hours of podcasts, then we’ve got great news for you: there’s a new podcast on the scene, and it’s real, honest, and gay as hell.

The Gayly Dose, a weekly podcast based and recorded in Atlanta, aims to create community among gay men who are seeking vulnerable, elevated conversation. Hosted by a charismatic and diverse group of gay men, the project will breach every topic, from the everyday to the taboo, in a way that’s both distinctly gay and unapologetically human.

“The Gayly Dose really came out of, initially, my own personal need to make connections in the gay world with like-minded men,” founder and co-host Helmut Domagalski told Georgia Voice. “I found that in the gay community, we would often engage in dialogue and discussions that were often vapid or basic … We [as gay men] have a really unique and relevant experience that we don’t often delve into, and that’s what we want to do with this podcast.”

The personality, heart, and soul of The Gayly Dose comes from four men, all currently living in Atlanta: Domagalski, a Latino Texas native and father of three girls; Bennett Schnyder, a Millennial self-proclaimed Renaissance Man raised in a loving Christian family; Stuart Terrell, an ex-rural Georgian now celebrating a partnership of 20 years; and Dante Rhodes, a native Atlantan who, despite being the youngest of the group, offers up an old-soul perspective.

The group is diverse in age, race, and ethnicity, something Domagalski was intentional with when choosing the cast.

“We’re offering the diversity of opinions that comes from our different, unique experiences,” he said. “[Because we are often excluded due to our sexuality], the gay community often groups together so strongly with people who are alike, but I think embracing diversity under the gay umbrella can be really powerful.”

The podcast and conversations are all based around the five Gayly Dose values: candor, excellence, fun, safety, and gayness. These five tenets are the basis for keeping conversations about topics like monogamy, religion, body image, relationships, dating apps, and family real and honest.

“People are tired of fake and manufactured,” Domagalski said, which is why at The Gayly Dose, they strive to be as real as possible and encourage others to do the same. “We’re hoping to connect gay men and be vulnerable and open on these topics that maybe people aren’t talking about.”

It’s the creation of honest and meaningful community that is the ultimate goal of the podcast; they’re striving to create good conversation not only among the four of them, but among others, as well.

“The ultimate goal is for people to then connect on their own,” Domagalski said. “We want to point people to resources and encourage them to start a dialogue with their friends on their own. A big aspect of mental health is your family, or your chosen family. Connection to real people makes a world of difference, and we hope to be able to provide that with The Gayly Dose.”

That’s why they pair fun and witty banter with an intentional point of action and introspection, which closes out each episode and prompts listeners to engage with The Gayly Dose message in their own lives. Listeners will also be encouraged to share their thoughts and feedback via social media and their website, so they can actively participate in guiding the conversation.

While Gayly Dose listeners can expect consistent, honest conversation and a deeply meaningful sense of community and connection, in the words of Domagalski himself, listeners should also “expect the unexpected.” Be ready for shocking conversations, controversial opinions, and discussions that will make you question what you once knew, because these men are determined to build something transformational.

“We want to be a tool for everyone to evolve their own selves,” Domagalski concluded. “Expect kind, thoughtful, and insightful messages, and expect to challenge yourself and internally realize more about yourself and your relationships.”

The Gayly Dose premieres on November 17, with new episodes dropping every week. You can listen via Spotify, Google, Apple, or wherever you get your podcasts. Follow the podcast’s journey on social media @thegaylydosepod and learn more at thegaylydose.com. Follow the cast: @helmut_smile, @gaylybennett, @stulit2, and @thedanterhodes.