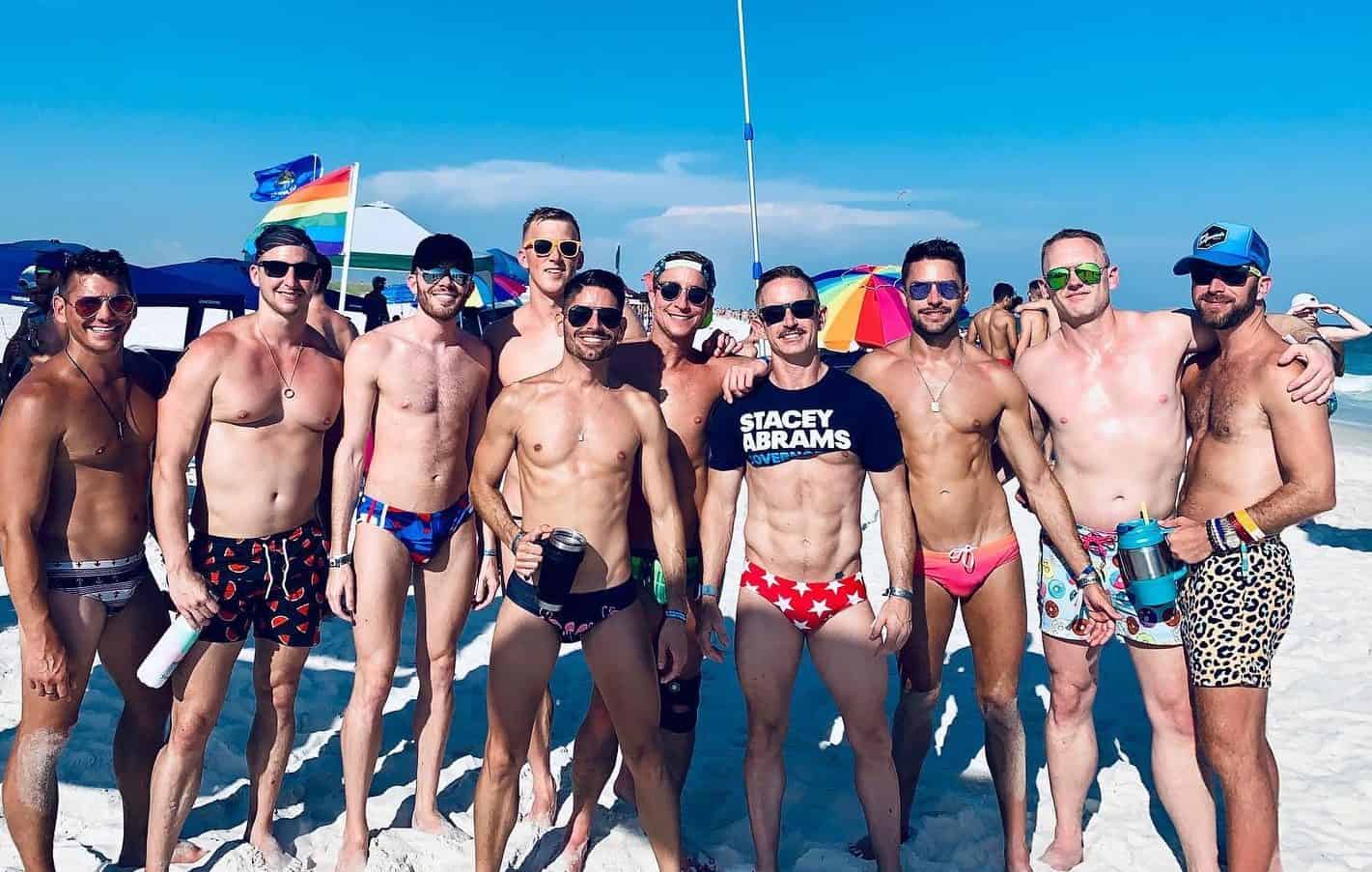 There’s something special about welcoming in the official start to Summer under beautiful blue skies, surrounded by thousands of men in speedos, with magical turquoise-colored waves crashing onto a pristine white beach. If that hasn’t sold you yet, just wait. For nearly 50 years, Pensacola Beach has been the site of fun in the sun for the LGBTQ community, even when it started with just a few friends of Pensacola couple Ray and Henry Hillyer. It’s now considered the unofficial Pensacola Pride weekend even though the city’s actual pride event is in mid-June. Although there’s not a festival or parade, there’s plenty to classify the holiday weekend as one of the top pride events in the country.

It’s one of the prime vacation spots for members of the LGBTQ community across the Southeast. The weekend does compete with events like International Mister Leather in Chicago and a big circuit party event weekend in San Francisco, but for those on the east coast, Pensacola is the place to be. It’s a trip that’s better taken with a group of friends, as the Portofino Island Resort (host resort) can get quite expensive for accommodations depending on the size of your group.

Jay Watkins, who teaches U.S. history at Georgia State University, told the Pensacola News Journal back in 2016 that weekend events have created a place where gay, lesbian, transgender people can come together openly and celebrate their lives and culture.

“A lot of people might not look at beach parties as political acts or civil rights acts but there was a lot of value in providing a space where people could be open and come together as a community,” Watkins told the News Journal. “I’ve heard story after story about people who came to the events, and that gave them the courage to come out, and gave them consciousness that they took with them when they left.”

For those looking to enjoy the beach during the day, it’s more than just a beach umbrella and a few chairs. Groups go all out bringing double tents, large speaker systems, tent decor, flags for their respective cities, and even activities for beach passersby. Expect southern hospitality at its finest where tent-goers will welcome you to their abode with food, drinks, hugs, kisses, and even a few gropes all in good fun. Feeling even friskier? Several tents this year posted “Shots for Cocks” in hopes of getting glances at beach manhood. There’s even a lesbian area where women of all backgrounds mingle with one another and even oil up in KY jelly wrestling matches. Again, all in good fun, visitors on Pensacola Beach choose to let loose and make the most of their weekend away from home.

But it’s not just about the beach for some visitors in Pensacola. Many come for the parties, music, and DJ lineup, and it’s all thanks to Johnny Chisholm, owner of NOLA Cafe on Pensacola Beach. He’s organized a weekend-long series of circuit parties for nearly 26 years, and each year his parties continue to grow.

There’s now a huge white tent at the beach’s Park East that houses all of the evening festivities. The daytime T-dances are held at the Portofino Island Resort’s main pool. There’s no shortage of fun for visitors looking to soak up the daytime sun and dance the night away under the stars.

The DJ lineup was stellar this year with DJ Drew G, Will Love, Blacklow, Grind, Joe Ross, Toy Armada, Alain Jackinsky, and Australia’s Kitty Glitter taking visitors on a journey the ultimate journey of sound. Friday night’s headliner, Joe Gauthreaux, continues to come back because of the crowds and the energy, plus he’s a local favorite as he’s now based out of Atlanta, Georgia, which is a quick six-hour drive away.

“It’s a very special weekend for me also because it was one of the first places I played 20 years ago,” said Gauthreaux. “The start of my career as a “touring” DJ started in Pensacola, and it makes me so happy to say the party I played in 1999 (an after-hours party) was produced by Johnny Chisholm.”

Gauthreaux attributes the magical weekend to a perfect storm of music, men, and a master plan to create the ideal vacation spot for folks around the country. “There are friendly boys, parties that are lit – but don’t get too crazy til all hours so that you miss the daytime fun, and it’s all in a very unique setting,” he told the Georgia Voice. “There’s something really magical about playing music and dancing on a beach that can feel like it’s in the middle of nowhere.”

But can anything compare to miles of extravagant tent setups decked out in rainbow flags, men and women in skimpy bathing suits (some topless and nude), and blaring circuit music from makeshift DJ booths? It’s essentially an LGBTQ paradise of acceptance and inclusiveness that lands ferociously on the sands of Pensacola Beach once a year.

Whether sexy men or women are your prerogatives, or you want to dance the day and night away with some of the world’s top DJs, or you simply want a relaxing day under the sun, it’s all here. Forewarning though as taking it all in can be extremely exhausting but for many who’ve experienced such an intense weekend, as they leave this makeshift safe haven, they admit they’d do it all over again in a heartbeat.