‘The Book Club Play’ at Horizon 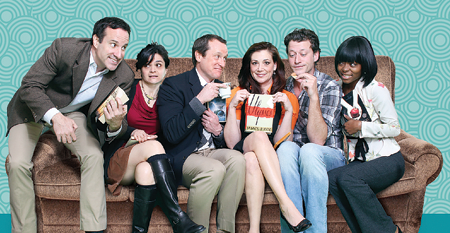 A gay character is part of the ensemble of the new “The Book Club Play,” which opened May 17 at Horizon Theatre.

Save for a young woman who is in her ‘20s, the characters here are all pushing 40 and dealing with that challenge. At the heart of the comedy is Ana (Wendy Melkonian), a control freak of sorts who is a features writer for a newspaper and a passionate founder of her book club.

The other two founders are her husband, Rob (Bryan Brendle), who is more into the social aspects of the club than the reading, and their historian friend Will (John Benzinger). Others in the club are Ana’s friend Jen (Maria Rodriguez-Sager), Ana’s young protégé Lily (Danielle Deadwyler) and Alex (Dan Triandiflou), a comparative literature professor who challenges the group with a notion that to be part of culture, they need to embrace the Beyonce along with the Bach.

Their book club meetings are being made into a documentary by a Danish filmmaker and suddenly nothing is outside the range of the camera lens — and how the characters interact and behave changes as well.

Directed by Jeff Adler, Horizon’s co-artistic director, “The Book Club Play” has a character who is gay – Will. He has not dealt with it yet, however. The character is reading “The Davinci Code” and comes to a realization that if he dies, his secret will go with him.

“He comes to an awakening,” says Adler.

According to the director, Will is in something of a romantic triangle with Rob in Ana’s mind.

“They have all known each other from college,” says Adler. “They used to date before she married Rob and she thinks he still has feelings for her.”

Lily, being younger and hipper, has already made the observation early on about Will but no one else in the book club agrees. When Ana finds out the truth, she has to adapt.

The show is written by Karen Zacarias, who has a history with Horizon.

“We did her play ‘Legacy of Light,’” says Adler. “We are enamored of her as a writer. What we like about this one is that it’s very smart. It’s well written and fits our mission.”

The current comedy drama “Lark Eden,” now playing at Aurora Theatre, is something of a coup. It involves an all-female team – with a female director, actresses and design and production crew. That is a major appeal for Melissa Foulger, the lesbian director at the helm of the show.

“It hasn’t been that much different in terms of the work,” she admits. “But a show like this gives women opportunities in the arts they have been lacking.”

According to Aurora, 80 percent of Broadway shows are directed by men and two out of three acting gigs are by men as well. In the U.S., it is also estimated that three quarters of plays are written by men.

As written by Natalie Symons, “Lark Eden” is a Southern comedy about a fictional Georgia town known as Lark Eden. Three women — Thelma (Minka Wiltz), Mary (Rachel Garner) and Emily (Naima Carter Russell) — remain friends for more than eight decades, originally living near each other but moving away. Although their lives change over the years, they stay in touch.

Beyond the all-female team, the story beckoned to Foulger as well.

“To me, it’s about lifelong friendships that we make and how they change,” she says. “These friendships have their ups and downs.”

Foulger, though, didn’t want this to come across as being a “chick flick” kind of production. Instead, she wanted to make the story universal.

Although there is no LGBT content in the production, Foulger feels that it touches essential truths.

“For the people in your life, maintaining these kinds of relationships is just as important as the romantic ones,” she says.

Lesbian director Heidi S. Howard directs this drama about a woman breaking free from a dead-end job and making a new life for herself.

“The 39 Steps”
Through May 19 at the Academy Theatre
www.onstageatlanta.com

Gay actor Charlie Miller is part of the ensemble of this comedy/mystery spoof, Onstage’s first show since leaving its former home.

“Spank! The Fifty Shades Parody”
May 14 – 19 at The Buckhead Theatre
www.thebuckheadtheatre.com

“Brer Rabbit & Friends”
Through May 26 at the Center for Puppetry Arts
www.puppet.org

Gay director Freddie Ashley helms this tale of four writers getting more than they bargained for during a writing class lead by a world-class author.

Top photo: ‘The Book Club Play’ is a comedy about friends whose gatherings go awry in the presence of a documentary film crew. (Photo by BreeAnne Clowdus)