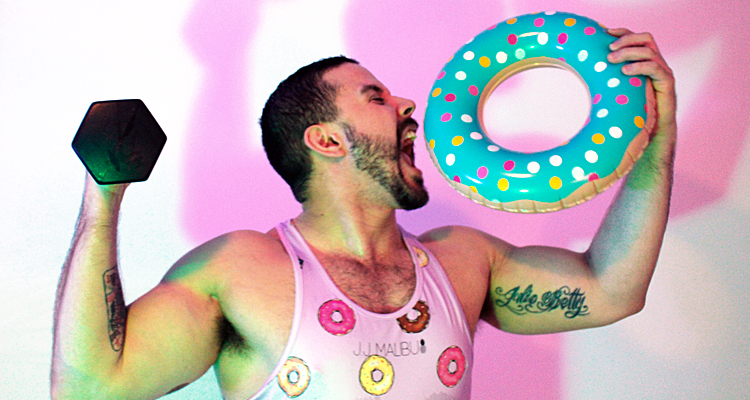 Trading in Doughnuts for Dumbbells

It’s no secret that eating less fatty foods and working out more can help you lose weight, gain muscle, and live a much healthier lifestyle. But how easy is it to really drop the dozen doughnuts and pick up some weights? If it were easy, everyone would be in the best shape of their lives, right? The taste of a fresh, hot doughnut or any other treat can be irresistible, but what if we showed you the numbers behind the sweets and just what they do to your body? Would you change the way you eat then?

We’ll take doughnuts for an example! According to Delish.com, an original Krispy Kreme donut has 11 grams of fat – five of those being saturated – while a Dunkin’ original donut has six grams of saturated fat (30 percent of your fat intake).

On average, to burn off a 350-calorie doughnut, a person who weighs 150 pounds would have to swim for about 35 minutes, walk for 54 minutes, or attend an hour-long yoga class, says Healthline experts. If you weigh more, expect to put in more work at the gym on the treadmill or with weights.

So, is one hour of cardio a day enough to burn those delectable treats in your pantry? Experts say you might burn anywhere between 200 and 1,000 calories in an hour of cardio. That’s about three doughnuts worth of calories! If you burn 600 per hour, six days a week, that’s 3600 calories which equates to about ten doughnuts! That would be enough to lose one pound a week. Just one pound! Not to mention everything else you’re taking in with higher calorie counts.

After looking at the numbers, can you justify that glazed doughnut in the morning, or does doing a few dumbbell curls with an hour of cardio sound like the way to go? Your choice makes staying in shape all the more rewarding!