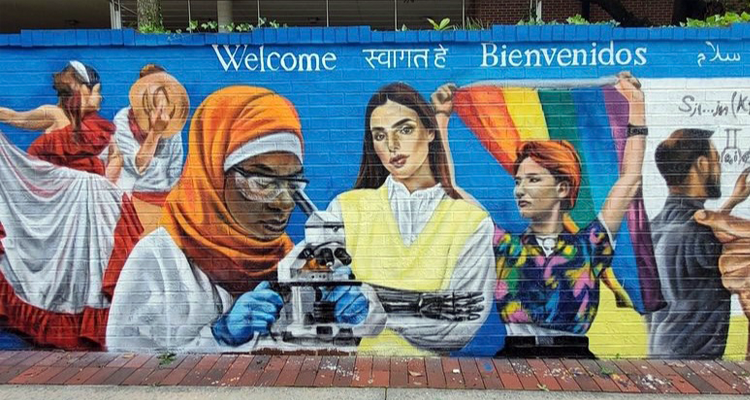 Two LGBTQ-inclusive art installations have been introduced to Georgia Tech’s campus over the last month.

The project was helmed by Lisa Medford, the Pride Alliance president. She told the Atlanta Journal-Constitution that she had been pushing for the project since Fall 2020. The artist who painted the stairs, Ting, is a Georgia Tech alum and was active in the school’s LGBTQ community.

Another pro-LGBTQ mural was recently completed on Tech’s campus. Artist Fabian Williams worked alongside a group of students to create a mural, located on Skiles Walkway, celebrating the school’s diversity. The project was helmed by 2021 graduate Sinet Adous, who worked with the Georgia Tech administration to get approval and funding from the Mental Health Joint Allocation Committee over the last year.

According to a press release from Georgia Tech, the idea for the mural came from Adous’ realization that the school was missing an accurate representation of its diversity.

“I couldn’t find many representations of people who looked like me or shared my same interests upon first matriculating at Tech,” she said. “Over time, however, I found our student community is richly diverse in more ways than one: in identities, passions, skills, and interests. I wished this was more obvious to me when I began my journey here.”

The mural, which is a permanent fixture of Tech’s campus, is the first mural on campus that was backed by student organizers. Williams talked to Georgia Voice about the process of collaborating with the students to come up with a design that was as representative of the school’s diverse student population as possible

“Diversity is such a wide subject — how do you capture the essence of everybody coming from all over the world to Georgia Tech,” Williams said. “To capture everybody can be kind of tricky. There was a lot of back and forth on who to represent and how, who’s accounted for, how to acknowledge the LGBTQ community.”

After many discussions between Williams and the student group and results from a student survey about what they thought should be included, a design was finalized. The mural includes portraits of people from a variety of ethnic backgrounds participating in the sciences, arts, and athletics, as well as one person holding up a Pride flag, with “Welcome” written across the top in multiple languages.

Williams said that he believes the mural effectively captures the school’s diversity.

“There’s a lot of different cultures that are coming here, and while I was painting it, I noticed that just about everybody — people from Ethiopia, India, Spain — stopped and noticed a little bit of themselves. I thought [the piece] was on target, making them feel welcome.”

The mural marks a shift in Williams’ philosophy regarding art and its influence over the future.

“I believe that [art] is an opportunity to plant seeds for the future,” he said. “A lot of my work from here on out is going to be talking about the past and the present but having a firm foothold on what we want for the future. The first thing you have to do to get a future you want is to visualize it — what does a world look like where everybody is absolutely equal, and you’re judged by your character instead of the color of your skin? At the end of the day, art controls culture and culture controls people.”