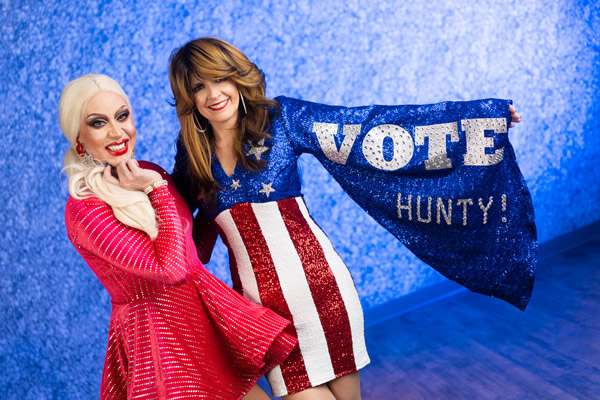 Drag queens and kings across the U.S. are set to take part in a national campaign to raise awareness on voting processes, rights and regulations.

Drag Out the Vote, a nonpartisan and nonprofit organization working to increase voter turnout in LGBTQ individuals and young people, was founded by Jackie Huba, an LGBTQ ally who hopes to use the art of drag to attract voters to the polls.

Starting Tuesday, drag queens and kings from the U.S. can apply to be “Drag Ambassadors” with the nonprofit, and share voting information on their social media, host voting-related events and provide voting resources to their followers.

Huba said she was also inspired by the low numbers of voter turnout: 1 in 5 LGBTQ people are not registered to vote, and 100 million people did not vote in the 2016 election. This initiative is meant to help change those metrics, she said.

Drag Out the Vote will provide general information and copy for the drag queens and kings, but Huba said she is looking forward to the participants taking creative liberty with the initiative. Drag artists will also customize their outreach to best suit their individual locations, and provide specific information for that state’s voting regulations and information.

Carey said using drag queens and kings as the image for promoting voter turnout is powerful, and drag performers are “political beings as it is.”

“It’s my job and duty to inspire people to get out there and involved, and people look to the drag queens almost like a place of safety … like we’re helping guide,” Carey said. “That’s what a lot of people are realizing and want to work with us on this stuff. It just kind of comes hand in hand, natural. And I don’t know what drag queen that’s not afraid to speak her mind and stand up for people.”

Drag Out the Vote also plans to educate the artists on phone and text banking to mobilize their fans. The Drag Ambassador Program will partner with national organizations that include Planned Parenthood and the LGBTQ Victory Institute.

Because of the pandemic, Huba said drag performers are relying on their digital platforms more than ever — without the traditional drag brunches and night club performances, they are utilizing digital streaming platforms like Twitch to engage with their fans.

“It made sense to take their microphones … in real life, megaphones on social media, and use that to help with our democracy,” Huba said.

“I was so amazed and fascinated at how these artists were creating this really confident, bold persona that could speak their mind, who could own who they are and be supremely confident,” she said. “I was just at a point my life where I wanted that confidence, and I was so inspired by it and so I just threw myself into it.”

Huba has written four books in her career, including “Fiercely You,” a book that encourages people to “be fabulous and confident by thinking like a drag queen.” Carey met Huba by performing at a launch party for one of her books, “Monster Loyalty: How Lady Gaga Turns Followers into Fanatics.”

When Huba approached Carey on being a leader in Drag Out the Vote, Carey said it was a “no-brainer” to join her.

“I’m American first, and I care about what’s going on here in America, and I want to create change, and I want to a positive environment for everybody here,” Carey said.  “But I’m an artist, a drag artist, and it was really cool to see that not only was I being respected as an artist, but that my talents and my skills were something that she (Huba) valued and wanted to use for good.”

Before creating this nonprofit, Huba had never worked in the political or nonprofit world before. Through advice and help from experienced organizers and a sponsorship from the arts service organization Fractured Atlas last year, Huba was able to launch the organization.

After the launch in January, Huba was humbled by the number of emails she received from people wanting to help with the initiative, like providing security for previous in-person events or planning functions for the nonprofit.

Carey and Huba are most concerned with voting challenges caused by the coronavirus pandemic and want to prioritize educating voters on the ever-changing voting landscape. States vary in voting protocols and Drag Out the Vote local campaigns and Drag Ambassadors are meant to help alleviate that confusion.

Huba also said the dwindling amount of poll workers is concerning. She plans to promote working as poll workers to prevent voting locations from mass closures.

Education is the main goal for Carey, he said, and is excited to use his platform for positive and educational messaging on voting.

“It’s a great time for people like me and the other co-chairs who have huge platforms, because we can share the correct information,” he said. “Because with social media, it’s just a cesspool of incorrect information, and it’s just ridiculous, so education is absolutely my number one (priority) and getting that proper information.”