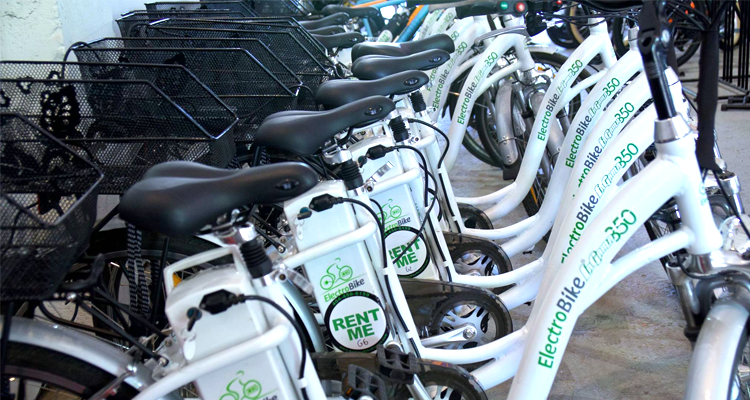 Electric bikes (e-bikes) offer a boost to the traditional bicycle riding experience, and the COVID-19 pandemic has been an unexpected accelerant for an Atlanta store seeking to chart a new path in the e-bike industry. Since opening in the fall of 2016, ElectroBike had enjoyed sales brisk enough for it to expand its original location and also acquire a traditional bike shop on the northeast BeltLine; and the last month has been like an opening throttle, quickening ElectroBike’s already impressive pace.

“The business has been growing every month over the years, and since this coronavirus hit, our business has gone up exponentially,” owner Eric Hunger says. “People are staying at home and want to get out and exercise; it’s a natural thing to do.”

Outdoor exercise is among the approved activities under the stay-at-home order signed by Georgia Gov. Brian Kemp April 2, and the breeze felt on a bicycle ride is proving to be an attractive outlet for Atlantans who have been stuck in the house the last few weeks. Along with purchases at ElectroBike, Hunger has also seen an uptick in customers at his conventional bicycle shop, the Atlanta Bicycle Barn.

“We have people coming in both stores that have to get their bikes repaired so they can get to work, we’re seeing a leap in bike maintenance,” said Hunger, noting that bicycle shops were classified as essential businesses during the widespread shutdown. “I think with the stay-at-home orders and people wanting to get out, it’s helped the bike industry as a whole.”

Atlanta’s topography and the relative emptiness of the city’s streets are two other factors likely increasing folks’ interest in what is still a burgeoning type of bicycling.

“Some people are buying e-bikes just to get out on the road because there’s no traffic and they don’t feel threatened,” Hunger said. “There’s quite a number of hills in Atlanta that are very steep, and these help you climb the hills.”

After decades of existing as a niche market, e-bikes have experienced a mainstream boom in the last five years. Economic forecasters at Deloitte predicted 130 million e-bikes would be sold globally between 2020 and 2023, a number that might be adjusted upward given the bump COVID-19 has given to e-bike sales.

All e-bikes use a Lithium-ion battery that typically takes less than three hours to charge, and which can last from anywhere between 35 and 100 miles. The motor supplements a cyclist’s efforts using pedal-assist technology, which allows riders to maintain a faster pace with less exertion and climb hills with minimal resistance.

“You can get as much exercise on these e-bikes as you want,” said Hunger, who explained that riders can adjust the pedal-assist levels to determine how much of their own leg power they use. “If the battery runs out, you can pedal it like a normal bike. You won’t get stranded, you can always pedal your way out of it.”

With an average price of $2,000 at ElectroBike, e-bikes remain a somewhat luxury purchase whose cost is largely influenced by the type of battery used. A standard e-bike runs for about $1,400, with the price increasing with amenities like built-in headlights, hydraulic brakes or a throttle that accelerates the bicycle from a complete stop.

The early wave of e-bike customers included folks looking to reduce their carbon footprint, work commuters, aging riders and couples who were downsizing from two cars to one. However, Hunger envisions e-bikes revolutionizing urban transportation by offering an alternative to driving that doesn’t leave users feeling worn out.

“The e-bike allows you to pedal and get all of the assist that you want without sweating or ruining your clothes, and that has a lot of appeal to people.” Hunger said. “We really don’t have a target market, because we have people from ages 14 to 85 buying the bikes.”

ElectroBike currently sells 11 brands of e-bikes, and its showroom of 38 e-bikes will almost double to 60 once it expands into the vacant space next door. As the market for e-bikes explodes, Hunger hopes to turn ElectroBike into destination shopping.

“Conventional bike stores will have a killer category of conventional bikes, and they may have three or four or five e-bikes on the floor,” he said. “When you come into this store, we’re going to have every type of e-bike, size and look and there’s no reason for you to go anywhere else.”

Ironically, COVID-19 is slowing down ElectroBike’s growth just as it as it fueling it, since the retail expansion can’t be finalized until the shutdown ends and city officials can finalize the inspection.